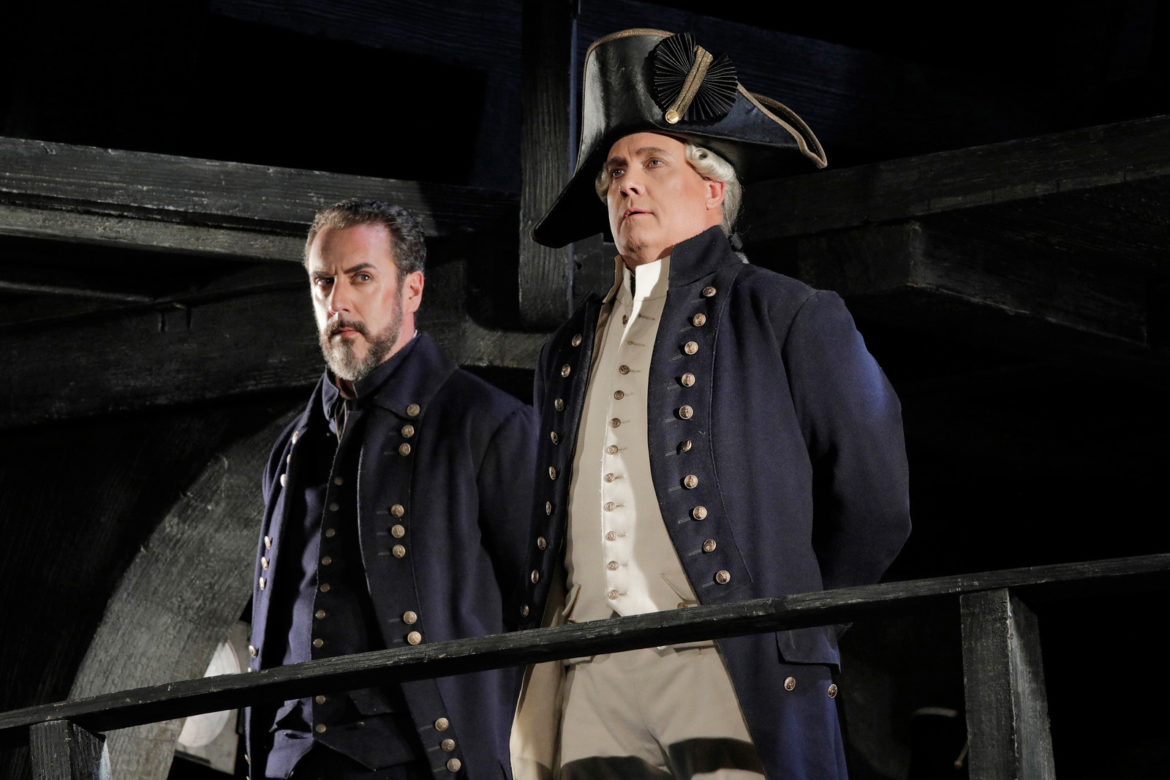 • Definitely not your good ship Lollipop: Good and evil, virtue and vice, guilt and pure, pure innocence. The clash of opposites takes place with intense drama on the high seas in San Francisco Opera’s production of Benjamin Britten’s “Billy Budd,” based on the Herman Melville novella of the same name. American baritone John Chest stars as the young seaman in the title role, with tenor William Burden as the conflicted Captain Vere of the H.M.S. Indomitable and bass-baritone Christian Van Horn as the despicable sergeant-at-arms Claggart. The production opened to great reviews last weekend and has performances at 7:30 p.m. Thursday and 2 p.m. Sunday, with repeats on Sept. 17, 20 and 22. It’s sung in English, but there are supertitles, too. War Memorial Opera House, 301 Van Ness, San Francisco; $26-$398; 415-864-3330, www.sfopera.com.

• Some poetic justice, perhaps? Conventional wisdom — and recorded history, actually — has it that Sylvia Plath died by putting her head in an oven at age 30 in 1963. But there have been those who insist that the Pulitzer-winning poet and author of “The Bell Jar” really died because of the depression inflicted on her by her so-called brighter light poet husband, Ted Hughes. The fact that his last name has four times been chiseled off her tombstone by angry feminists was the springboard for playwright Lynne Kaufman’s “Who Killed Sylvia Plath?” The one-act show starring Bay Area actress Lorri Holt being reprised by the Marsh Theater at its Berkeley location reassesses the meaning of the poet’s life and death. The run begins at 5 p.m. Saturday and continues through Oct. 20. The Marsh, 2120 Allston Way, Berkeley; $25-$35 sliding scale, $50 and $100 front section reserved; 415-641-0235, www.themarsh.org.

• Lights on Festival: Vallejo’s own Gabi Wilson — aka H.E.R. — has emerged as an R&B star, thanks to her deeply personal songs, tremendous voice and terrific guitar playing. She headlines and curates this festival coming to the Concord Pavilion on Saturday; others on the lineup include Jhené Aiko, Daniel Caesar, Summer Walker, Ari Lennox, Kiana Ledé, DaniLeigh, and more. Music starts at 2 p.m. Tickets are $50-$125 at livenation.com.

• “Exit Strategy”: Ike Holder’s comedy/drama centers on a school targeted for closing and the band of teachers and others who fight to save it. It’s based on what happened to a real school in Chicago, but the emotional toll that a failing school takes on its community is something that anyone anywhere can relate to. Aurora Theatre Company in Berkeley is staging the show through Sept. 29. Tickets are $35-$70; 510-843-4822, www.auroratheatre.org.

Kerry Ipema’s “One Woman Sex and the City” comes to San Jose’s 3Below Theaters and Lounge. (Photo courtesy of Kerry Ipema)

• “One Woman Sex and the City”: New York actress and writer Kerry Ipema created and performs this loving parody of the groundbreaking HBO sitcom. This is not one of those shows that manically re-creates the original material. Instead, Ipema treats her show as a “girls night out” party, riffing on iconic aspects of “SATC” and inviting the audience to join in. It plays at 7:30 p.m. Friday and Saturday at San Jose’s 3Below Theaters and Lounge. Tickets are $35-$45; 408-404-7711, www.3Belowtheaters.com.

Join us in building our community by signing up for our weekly newsletter. We publish stories about the Bay Area, where you live, work and play, supported by readers like you through Bay City News Foundation.