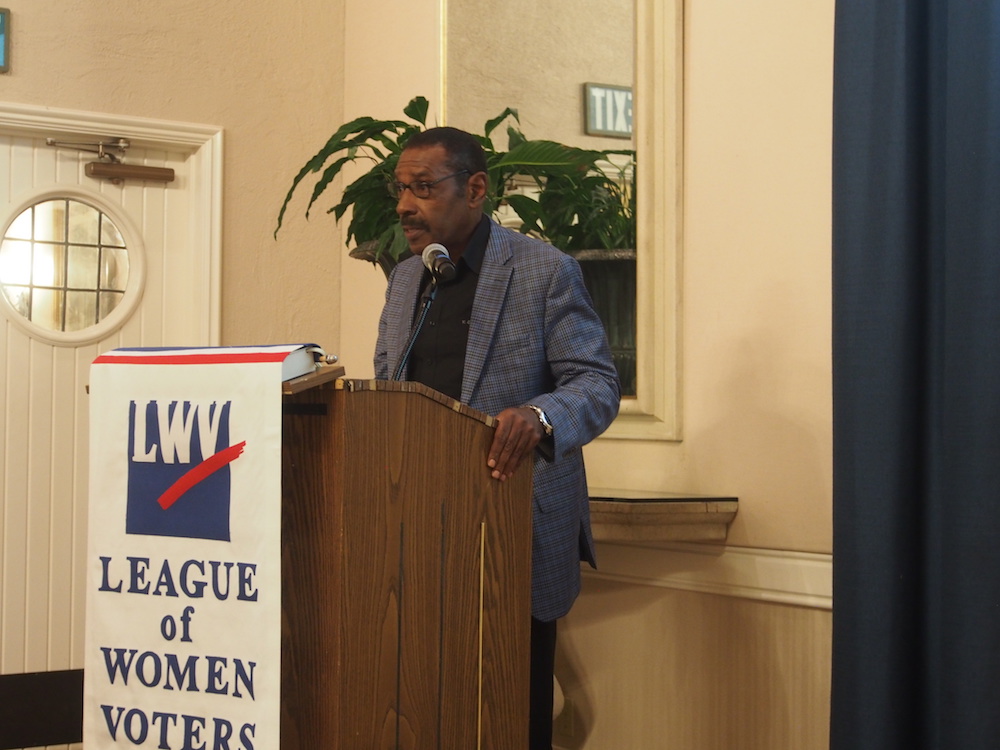 The challenges and high stakes involved in getting an accurate count for Alameda County when the 2020 census is conducted next spring were outlined in a presentation Sept. 18 by Supervisor Keith Carson and his staff to the League of Women Voters.

“There are a number of things that impact you directly and indirectly. There’s a lot of data that’s gathered,” said Carson, who has represented District 5 (Piedmont, Albany, Berkeley and parts of Oakland) since 1993. “If you think about it logically, it gives us the basis for projections over the next 10 years.”

And there is just one shot to get the tally right before final figures are submitted and  “calculations of how much money to provide” are made, he said. “That stays in granite for 10 years.”

The county estimates that each person not counted results in an annual funding loss of $1,000, and that an undercount of 6 percent would translate to $1 billion less in allocations over the ensuing decade. “Data and representation are important because out of that comes money,” Carson said.

Planning and outreach have already started earlier than in past years due to a daunting set of logistics that may make the newest census even more difficult to conduct than in the past. The national tally, done every 10 years starting with the inaugural census in 1790, will be transitioning from the traditional paper forms.

“The 2020 census is radically different,” Carson told attendees. “This will be the very first that households will do online. But the systems have not been thoroughly tested.” It is expected that 60 percent of respondents will fill out and submit their forms online using a 16-digit PIN or a QR code. But where such a system would normally be put through at least three dry run tests, the Census Bureau has conducted only one “dress rehearsal,” according to Carson’s office.

The expectation of digital participation has in turn led to a reduction in the number of field personnel, and “staff will only make half as many visits to each home” than was done in 2010, according to Carson’s office. The state and Alameda County have approved extra funds for outreach beyond what the census bureau has allocated. “That’s because we know that from that investment we get a return,” Carson said. “An army of individuals will go out everywhere to make sure it is filled out.”

The technological aspect is just one of several logistics to contend with. The county estimates that more than 26 percent of its population, an estimated 413,000 residents, falls in the classification of hard-to-count.

That includes a growing number living in tents, cars or RVs due to the region’s housing crisis, but “It’s not just the homeless,” Carson said.

Students at UC Berkeley and other college campuses are another population that can be difficult to count accurately, as well as those in group homes, co-ops and institutions.

What’s categorized as the “fear factor” is expected to be another major challenge, including concerns about data privacy, distrust of government, and the well-publicized attempt by President Donald Trump to include a citizenship status question on the form. “I want to assure you that data privacy and confidentiality are going to be protected,” Carson said.

The presentation cited a forecast by the federal Government Accountability Office that self-response to the census will decrease by 17 percent. “It’s essential they get counted and it’s not that easy,” said Piedmont City Councilwoman Jen Cavenaugh. She led the audience in a quick brainstorming session on “What specifically makes it difficult to get this job done.”

Attendees cited lack of computer access or technological experience, residents who travel frequently or for extended periods, are elderly, have health conditions, are distracted parents raising small children, are living at an address in an in-law unit or as a caregiver or au pair, are new arrivals, are renters, or live at more than one address.

Language is yet another challenge. There are 220 languages spoken in California, while the questionnaire will be available in 13 languages, with video guides and glossaries offered for 59 languages.

The presentation to the LWV is part of outreach that is starting earlier than in the past to enlist community groups to spread the word about the importance of a thorough count and build public support for the effort.

In particular, volunteer ambassadors — described as “trusted community members” — are being recruited “to educate communities about the census and its importance, dispel myths, and motivate” residents to be counted, according to Carson’s office.

Mini-grants for organizations that want to host outreach block parties or other gatherings are available.

“There are many ways to get involved,” Cavenaugh said, noting that more than 500 enumerators will be hired to contact unresponsive households. Enumerators are paid $25 an hour and the work is ideal for “someone looking for a part-time job with a lot of flexibility,” she said.

Carson said after the presentation that he is “deeply concerned” about the chilling effect the citizenship question, which does not appear on the census form, is already having during a time of immigrant detentions and deportations nationwide.

“If somebody is afraid to get routine medical care, they wind up in the emergency room, which is much more costly,” he said. Those in homeless camps are also resistant to answering questions, Carson said.

“Some people are so distrustful about giving any information to anyone,” he said. “That’s why we’re starting early to identify the best way to reach people wherever they are and whoever they are, and identify their status.”

An invitation to respond to the census will be sent to addresses March 12-20. Reminders will be sent in the following weeks and census-takers will follow-up in May with those who haven’t responded.

Applications for 500 enumerator jobs in Alameda County are open now through January and application and information workshops will be held starting this fall. Training is required. For more details visit 2020census.gov.jobs.

Those who have questions or want to know how to help can contact Shahidah Lacy at Shahidah.Lacy@acgov.org, Mina Sanchez at Mina.Sanchez@acgov.org, or call Carson’s office at 510-272-6695.