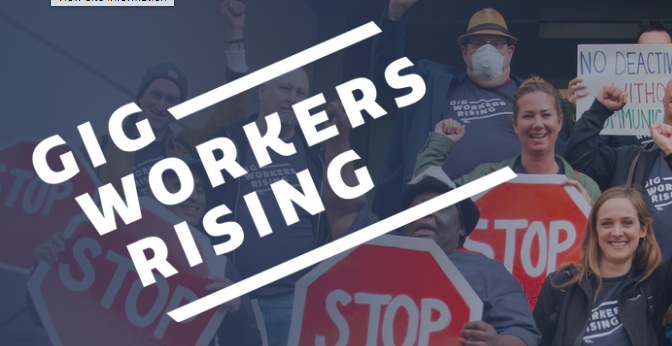 Dozens of Lyft and Uber drivers congregated in downtown San Francisco on Tuesday amid a three-day pilgrimage throughout California as they seek to become employees with basic protections. During the noon rally outside of Uber headquarters on Market Street, drivers with the ride-hailing services blocked traffic and honked their horns for more than an hour as protesters took to the streets.

With the pilgrimage, the drivers are calling on lawmakers to support Assembly Bill 5, which would change the their classification from gig workers to employees. The reclassification would give the drivers basic worker protections like minimum wage, health insurance and paid sick days.

“If I work, I should not find myself struggling to pay for my son’s health insurance when I have incapacitating back pain due to extra long driving hours. I should’ve been able to recover rather than force myself to work through weeks of agonizing pain,” said Edan Alva, an Alameda resident and four-year driver for Lyft. “Drivers should not be conditioned through an app to maximize our work and minimize our pay.”

“I live in constant anxiety. The rules by which I work by change on a daily basis. I can never estimate my income, other than the fact that it constantly goes down,” Alva said.

“We the drivers are fed up!” said Linda Valdivia, a three-year Uber driver and organizer with Mobile Workers Alliance. “Right now Uber and Lyft take home all the profits.

The drivers’ pilgrimage, now in its second day, began Monday in Los Angeles and took the drivers through the Central Valley. Following the San Francisco rally, the driver headed to Oakland for a worker roundtable discussion, where organizers will talk about the importance of AB5. On Wednesday, the pilgrimage will culminate in Sacramento.

Last year, a state Supreme Court decision in the case Dynamex Operations West v. Superior Court of Los Angeles held that workers need to be free from the direction and control of the hiring entity, must perform work that is outside the usual course of the hiring entity’s business, and must be customarily engaged in an independent business.

AB5, introduced by state Assemblymember Lorena Gonzalez, D-San Diego, in December would codify the Dynamex decision in state law. The bill passed the Assembly in May and has been referred to the state Senate. According to the group I’m Independent Coalition, made up of gig workers who oppose AB5, some 93 percent of the state’s independent contractors want to keep “independence over traditional employment.”

The group is seeking to keep their flexibility while adding some changes, like benefits and pay standards. According to the group, if the Dynamex decision becomes law, drivers won’t be able to choose their work hours, limiting their opportunities to have various jobs.