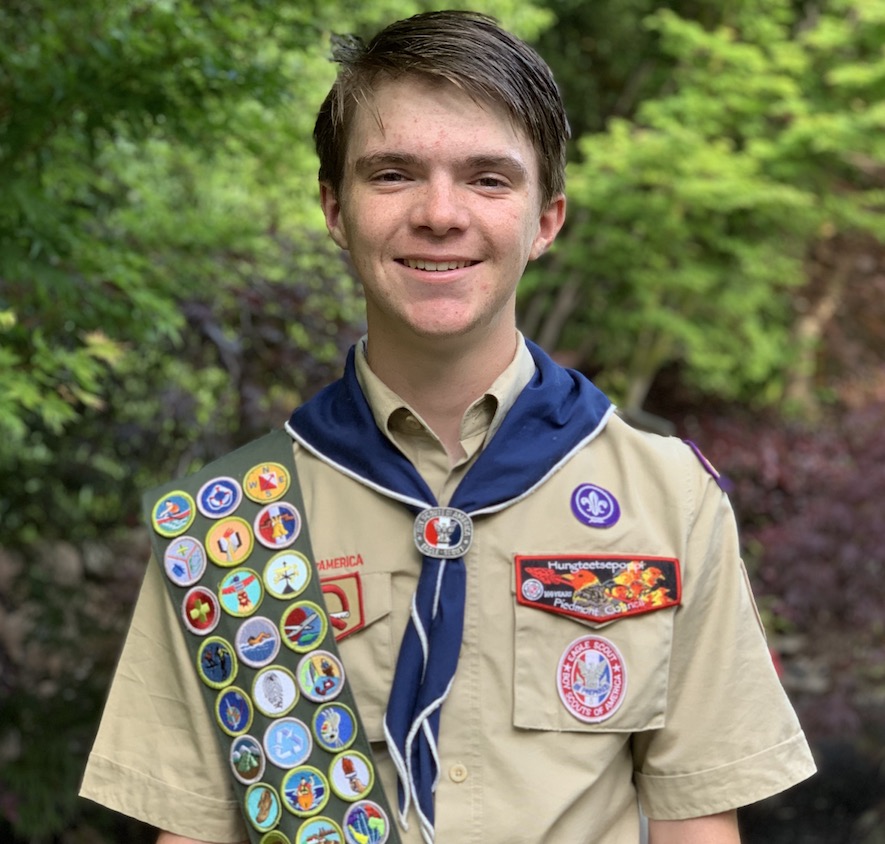 Luke Hawkins will be recognized as Piedmont Troop 4’s newest Eagle Scout at an Eagle Court of Honor this Sunday, August 25, 2019. He officially earned the rank of Eagle, the highest rank in Boy Scouts, on October 4, 2018.

On the path to Eagle, Hawkins earned 43 merit badges, exceeding the 21 required. His parents particularly enjoyed the Cooking merit badge as he can now navigate around a kitchen, and Personal Management, as he gained some insight into managing money. He has held several leadership roles throughout his Scouting career. His first role was Quartermaster, followed by Patrol Leader, and Troop Guide, in which he mentored young Scouts. He is a member of the Order of the Arrow, the National Honor Society of the Boy Scouts of America.

For his Eagle project, Hawkins designed and built a pair of garden planter boxes and four storage box lids for the Piedmont Play School, with the help of 11 volunteers who generously gave their time and support.  A grand total of 128.5 service hours were needed to complete the project.

Highlights of Hawkins’ Scouting experience include summer camps with many of his buddies – his favorite being Camp Marin Sierra where he enjoyed working on merit badges and hanging out around the campfire; the annual Troop 4 ski trip to Sugar Bowl; and rafting trips down the American River. He was very involved with Troop 4’s annual Fourth of July Hot Dog Stand fundraiser, which helps to fund the troop’s activities throughout the year.

Hawkins received the highest level of the Volunteer Service Award from the President of the United States for his community service hours.

A junior at Piedmont High School, he is a member of the varsity tennis team, having earned two varsity letters, a PHS Scholar athlete, and a member of the PHS Honor Society.