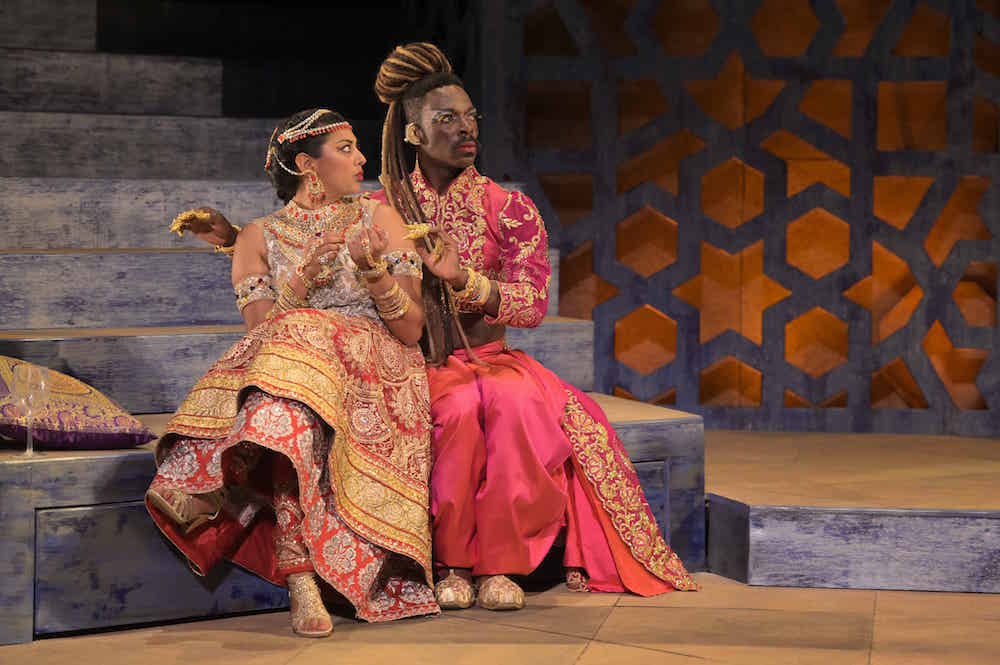 Playwright Madhuri Shekar’s House of Joy aims to hit a lot of points. The world premiere strikes gold with dazzling, expressive costumes and casting notable for having more roles for women than men and actors of color who bring authenticity and depth to the play’s South Asian characters. Less successful are characters who fail to surprise or develop substantially, a few hard-to-shed gender tropes, and an ending that instead of being climactic feels like a rushed attempt to tie up loose ends.

Set in a 17th century royal harem in Mughal India and energized by contemporary language and themes, there is timelessness in the empire’s brooding sense of decay, flagrant sexual politics, violence, treachery and in everyday heroes displaying humor, courage and foolish mistakes as they make—or choose not to make—desperate grasps at noble morality.

Inside the harem, the only men are Thermometer (Raji Ahsan), doctor to the polygamous monarch’s wives, and Salima (Rotimi Agbabiaka), a eunuch who wields his considerable power with mercurial, simpering allegiance.

When war in India pushes the empire to the brink of disaster and collapse, the battle for power between women inside the harem intensifies. Bows and arrows, sticks and sabers, somersaults and breast biting—yes, teeth dig in during a street fight training session—are the most overt, physical confrontations. But like a second soundtrack played by a hidden orchestra at a concert, deceptive plotting, whispered secrets, insinuations and rumors underscore the physical actions. Hidden agendas run rampant. Ultimately, Hamida must make a choice: protect the Chief Queen who she knows is regularly and viciously beaten by the emperor, or stay true to her mentor Gulal and the regiment.

From the start, costume designer Oana Botez’s craft leaps out as a highlight of the production. It isn’t often that costumes for a play express more range than does the script. Botez captures in color a harem’s spectrum, from the virginal white bodyguard attire to the sensory indulgence of silks in intense shades of fuchsia, gold, blue-green and more. Intricate embroidery, perfectly formed headdresses and dagger-like fingernail treatments are stories unto themselves; of vanity, class, domination and danger.

Although the actors are commanding and invested in fleshing out their roles, the ultimate responsibility for a script in which characters flatline falls to the playwright. All but Noorah rarely surprise or develop: Hamida is the same earnest, honorable warrior at the start as she is at the finish; the doctor is a Romeo in every scene; Roshni the cheerleader friend bounces vivaciously but metronomically throughout. Perhaps with more time, Shekar will rework the script and find subtle shades to add.

As for tired themes, male characters who are boyfriends or gay buddies and men “solving” women’s problems by suggesting the best escape routes or perfect faux tactics to evade misogynists hardly move feminism forward. Nor do women who only attain power by cloistering themselves or acting wickedly to each other and lying liberate themselves from gender restrictions. Must we suggest that to achieve respect from men, to attain positions of power, women must punch and stab each other?

When we don’t need women to be physically violent to be recognized as strong; when women aren’t portrayed as reliant on men to save them from trouble, when it is normative to have plays featuring the stories of people of color and casting directors who hire actors of color to fill the roles, that’s when we’ll really have a house of joy.