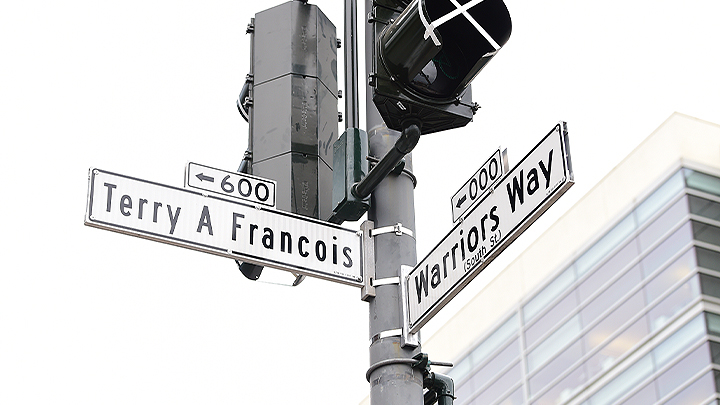 One month away from the Golden State Warriors’ Chase Center inaugural event, San Francisco has gained a new street name – Warriors Way. Warriors President and CEO Rick Welts gathered with a small clutch of VIPs Thursday morning to unveil the city’s newest street sign during the latest in a string of events leading up to the $1 billion arena’s grand opening.

“Another landmark day in the history of Chase Center and Thrive City,” Welts said, referring to the arena and the name for the surrounding shops and restaurants. The street, formerly South Street, runs for two blocks between Third Street and Terry A. Francois Boulevard in the Mission Bay neighborhood. The team’s new address is 1 Warriors Way.

Welts thanked Viktoriya Wise, chief of staff for the San Francisco Municipal Transportation Agency, Port of San Francisco Executive Director Elaine Forbes and the city’s Director of Public Works Mohammed Nuru, who were all in attendance. SFMTA officials and the port have worked with the Warriors to beef up the public transportation options around the arena, including the addition of a new ferry route and free Muni rides for people attending events at the Chase Center. He also thanked former Mayor Ed Lee and current Mayor London Breed. “As you know Mayor Lee was a huge advocate for bringing the Warriors back to San Francisco,” Welts said. “Mayor Breed’s been unbelievably supportive of everything that we’re trying to do here at Chase Center.”

The arena’s first event is scheduled for Sept. 6, when the rock band Metallica and the San Francisco Symphony will perform.