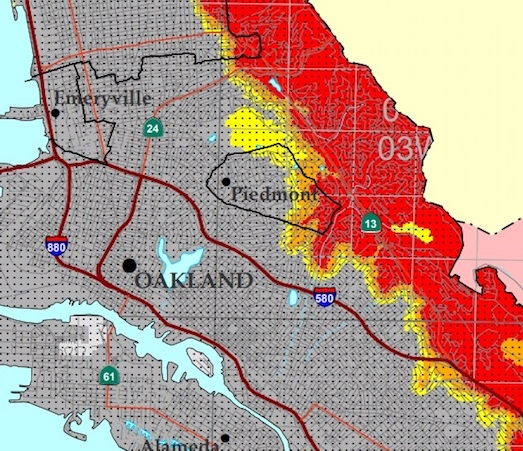 Fire season has started relatively quietly this year, but far from being time to relax, this is when the public needs to be vigilant and prepared as conditions get hotter and drier in the coming months.

“We’re below average in the number of acres and fires when you look at the statistics for California. But I caution people that statistics can be misleading. I expect September and October to heat up significantly,” Piedmont Fire Chief Bret Black said in an interview updating the current fire season.

The lesson from the fires that have devastated California in the past couple of years is to attack every incident with more resources initially to knock down fires as quickly as possible. “The philosophy is you’ve got to try to keep them small, so you dump more resources than you have in the past on those fires,” Black said. “Southern California so far has been fairly quiet. I have heard of a few fires that started and got quickly handled.”

Locally, outreach and addressing conditions are the priorities for the Piedmont Fire Department, and Black said residents overall are on board with the efforts. “We are well into our abatement and vegetation management plan,” he said, noting that the goats have finished its work in the bowl below Coaches Field and a crew from state agency CalFire will be addressing flammable undergrowth revealed by the herd. “Now that we can see what’s under there we can pull out a lot of material that is underneath,” Black said.

At Blair Park, “CalFire crews cleared way back to the hill, but there is a little grass by the roadway that we need to get in there and take care of,” said Black. The timing of removal is important, however, and needs to happen after the growth is dead. Otherwise, “If it rains, the part we mowed just grows right back.”

As far as compliance by residents, “I like to say they need reminding,” he said. “Most people are very understanding. Some have issues with their work and schedule. A lot of people call and email with really good questions.” Some neighbors have asked for more time to address issues and others ultimately comply “once they see we’re not going away.”

Educational outreach is also crucial. “Typically at this time of year we are in full swing trying to educate the public on actions they can take,” Black said. “At this point the message we are trying to reiterate is be self-sustainable. Be sure your house can stand alone.” Steps residents can take now to lessen danger are detailed in a new flier being circulated on “How to prepare your home for wildfires.”

Check out the video above by the Fire Department about how to minimize your risk (or click HERE to view it on the City website).

The flier lists three zones around a home. The closest is the immediate zone, 0-5 feet from a building, which requires the most attention and includes ensuring there is nothing on the ground or touching the home, including roofs and rain gutters, that can ignite.

The intermediate zone, 5 to 30 feet from a structure, is where “you don’t have to be as aggressive with leaves, but we ask that people trim trees up to six feet” and keep grass short.

The extended zone, 30 to 100 feet, applies to few properties in Piedmont and includes removing dead or dying grass 6 inches or taller, as well as dead or dying trees.

The department is trying various methods to deliver its preparedness message, from fliers to appearances with community groups to putting content online. “We try to keep talking about the topic but not repeating the same thing” so that people don’t tune out, Black said.

Only about 20 percent of Piedmont, concentrated at the city’s southern corner near Park Boulevard, falls in what the state defines as a severe fire hazard zone .“It’s one of the areas we focus our safety management program on,” Black said. “Anything in the hills people are really going to have to think about taking steps.”

That includes residents away from the severe hazard zone. “That’s a misnomer. People think just because they are outside the zone, they don’t have anything to worry about. I tell them, ‘The fire doesn’t know that.” One of the lessons of the 1991 fire in the Oakland hills was the rapid spread away from heavily forested areas. Another was the necessity of a plan to evacuate.

“I think there is more of a deliberate emphasis” on the importance of being ready to flee if the need arises, Black said. “The Camp Fire overwhelmed responders because there was such a huge rescue problem,” he said. “If you feel threatened by a fire, follow your instincts and leave.”

Preparation includes keeping water and a backpack of essential items in your car. “Those are resources that should be kept in the car all the time for whatever happens, an earthquake, a fire, or whatever,” Black said.