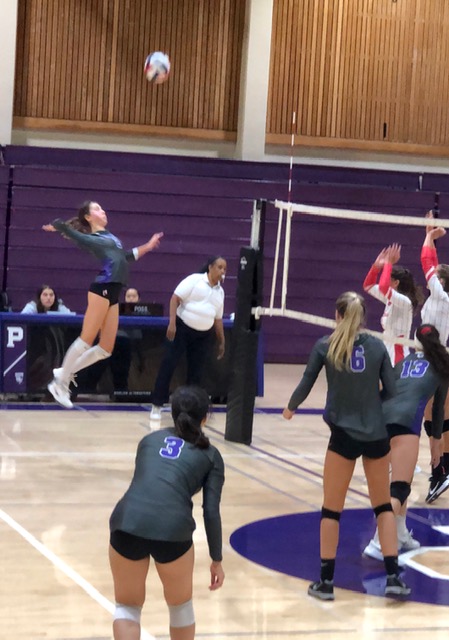 Daniela Skov winds up for a slam against Redwood, with Logan Thiel (3), Katie Goldberg (6), and Julia Praeger (13)

The first game was competitive throughout. After a brief letdown in the second game, Piedmont came out strong to start the third game, going up 11-6 and forcing Redwood to call a timeout. But the Giants took control from there, closing out the match on a 15-4 run.

Despite the loss, first-year varsity coach Daron True was pleased with the team’s effort. “It’s early in the season, so we tried some new things with our rotations”, True noted. “But we went toe-to-toe with an elite team, especially in the first game and first half of the third game. We’re talented and hard-working, and we’ll improve as the season progresses.”

The Highlanders play next against St. Joseph on August 30, followed by a tournament at Redwood over Labor Day weekend.