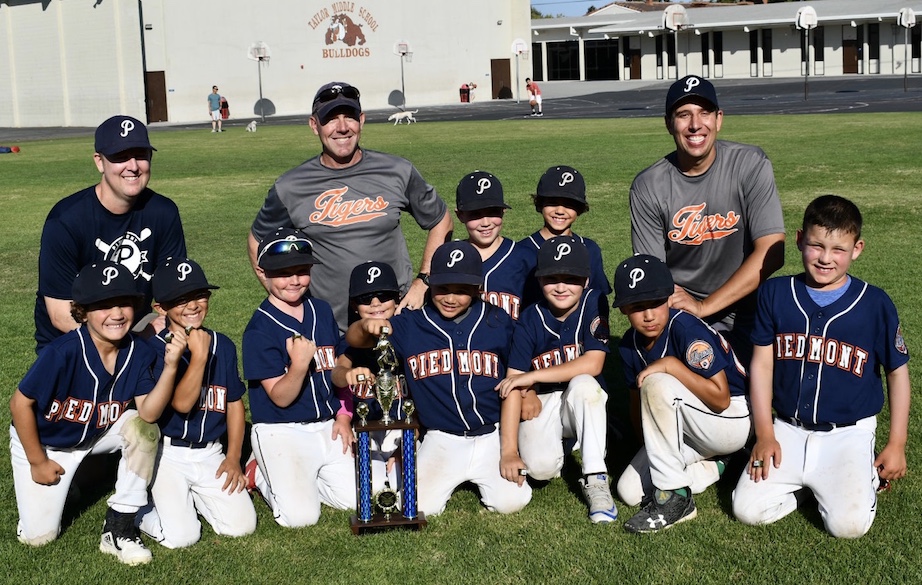 Every once-in-a-while in youth sports, the stars align, giving players memories, camaraderie, and hardware to cherish forever. This was the case on July 28 for the Piedmont Tigers, the Piedmont Baseball and Softball Foundation (PBSF) 8U All-Star team, who played a near-perfect triple header to win the 30th annual Millbrae Invitational.

Piedmont entered the bracket portion of the tournament as the 3rd seed. Despite an early start time, the Tigers won their quarterfinal game, shutting out the Belmont Lumberjacks 6-0. Ben Sorensen smoothly handled every chance at second base, while Julien Tindall and Ben McMurtry provided the offense with two RBIs each.

The semifinals would be a tougher match for the Tigers, as they looked to exact revenge on the Belmont Blasters, who had bested them the day before.

The Tigers hit well to start the semis, but really came alive in the bottom of the 4th. Cyrus Emanuelson got the inning started with a single. The hitting was contagious as the Tigers took a 7-1 lead on doubles by Tindall, Stein Mason, and Preston Baenen, plus a crushing single by Teddy Lee. Both the Tigers and Blasters played solid defense throughout, with the Tigers holding the Blasters to one run heading into the 5th.  Aidan Stewart made a number of fine plays at pitcher’s assistant, and Sorensen executed a gasp-worthy double play at second base in the bottom of the 2nd, snatching a hard liner and instantly touching the bag.

The Blasters made a game out of it in the 6th, scoring three runs. Mason caught the final out in right center to cement the Tigers’ 9-5 victory, and send them to their third championship game in three tournaments played this summer. (In the first two championships, including Piedmont’s Caldecott Cup, held at Hampton Field in July, the Tigers finished as the runner-up.)

To help energize the team during the long break before the final, Meredith Walsh, mother of Kyle Walsh, played Tiger favorites like “Old Town Road,” “Lose Yourself,” and “No Sleep ‘Till Brooklyn”, while the players showcased their various dance moves.

In the championship game, the Tigers faced off against the Pacifica Cages, who had knocked off the top seed earlier in the day in valiant fashion.  But the Cages were facing a Tigers squad that had coalesced and was ready to play its best baseball of the summer. By the end of the second inning, it was evident that the Cages would be in for a frustrating game. They were shut out on a series of hard-hit balls fielded adeptly by Emanuelson at shortstop, Baenen at first, McMurtry at third, and Walsh at pitcher’s assistant .

The Tigers’ bats were similarly strong. By the end of the 3rd, the Tigers took a commanding 12-0 lead after an onslaught of singles and doubles by the entire roster. But the offensive highlight came in the 3rd inning off the bat of Ben Cheek, who hit a rare grand slam in a tournament that makes home runs nearly impossible. Millbrae places cones 150 feet in the outfield, and according to officials, Cheek is only the second 8U player to clear the cones over the past four tournaments. Cheek’s teammates met the slugger at home plate with hugs, jumps, and beaming smiles.

The team’s defensive mastery continued, including two key outfield grabs by Mason. Meanwhile, the Tigers added five more runs to take a 17-0 lead. After the Cages went three up, three down to start the 5th, the Tigers were officially champions.

“I’m so proud of our kids”, Coach Emanuelson beamed. “They’ve been working hard all year, and to see it come together is just so gratifying. Now we can finally call ourselves champions.”

One thought on “Piedmont 8U Baseball team captures title”