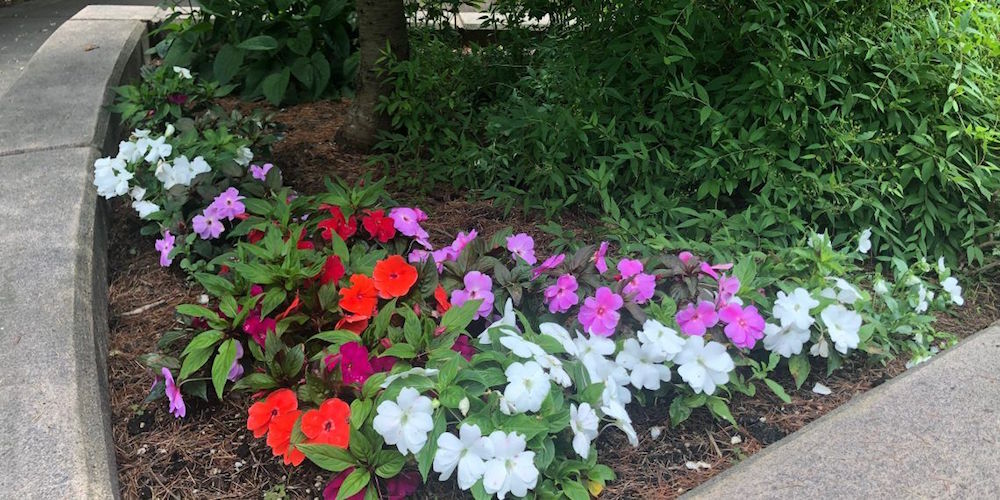 On a sunny summer day, I meet my aunt and her caregiver at the Ed Benedict Memory Garden in Portland, Ore. It’s a 10,000 sq. ft. self-contained circle of greenery, benches, shade, flowers, flitting cabbage white butterflies and a colony of bumble bees within a public park maintained by the city. The land on the east side of town is adjacent to a very busy freeway. I can hear the rumbling traffic — especially the trucks carrying freight — at the memory garden’s threshold.

Keeping pace with my aunt, the caregiver and I each hold one of my aunt’s arms, and we walk slowly into the strategically simultaneously brightly colored and shady Portland Memory Garden via its single entrance and exit. We could secure the wrought-iron gate behind us, if need be. The nearby vehicles, horns, and squeaky brakes fade away.

She still lives in her own one-bedroom condo with round-the-clock care and recently has begun to forget where she sleeps or how to get ready for bed. But she loves her tidy outdoor balcony with its boxes lashed to the railings and filled with lush greenery and bursts of New Guinea impatiens.

Here in the Portland Memory Garden are shade-loving violet, white, and fuchsia New Guinea impatiens beneath a tree and adjacent to black-eyed Susans. My eponymous aunt smiles both at the flowers she recognizes and those that share her name. The caregiver looks my aunt in her light eyes and says, “They should be named blue-eyed Susans.”

My aunt smiles, laughs a “Yes!” and keeps her gaze trained on the bright-yellow petals whose centers are big, raised, black dots.

Research shows that getting out into nature benefits everyone, and gardens especially curated for people losing their memories — and their caregivers — bestow particular advantages.

A 2015 study published by Stanford University scientists in the Proceedings of the National Academy of Sciences concludes, “public access to greenspace (are) important aspects of city planning that may…buffer against…stress, mental health, and even cognitive functioning.”

Research published a decade earlier praised the field of horticultural therapy for helping people with Alzheimer’s and other dementias feel happier and be both more socially engaged and aware of their surroundings. The Journal of Therapeutic Horticulture study concluded outcomes like these demonstrate “the power of plant-related activities.”

Horticultural therapy is similar to art and music therapy, “but we use plants as our modality,” Patty Cassidy explains. She is immediate past president of the non-profit Friends of the Portland Memory Garden, a registered horticultural therapist, and a member of the Seattle-based American Horticultural Therapy Association.

“Plants are important for people in general,” she says. “They really represent sustenance and life; they’re life-giving.” And for people with memory loss, she adds, “their original connection to plants still remain.” Such as to the sage they’d used in their younger years to season the Thanksgiving turkey, or strawberries whose sweet taste is safe to call unforgettable, or eye-catching red geraniums that folks often remember from window boxes from their childhood homes.

The Portland Memory Garden is accessible to all and includes what Cassidy calls “therapeutic features,” which include the selected plants, edibles, and trees, as well as its shape, abundant seating options, and even tinted sidewalk to keep glare at bay. These mirror the Alzheimer’s Association’s recommendations, according to a 1999 document published to coincide with the organization’s 100 Parks/100 Years initiative marking the non-profit’s first century.

The Portland Memory Garden, open to the public as of 2002, was part of this national initiative, and its team of professional landscape architects, plant experts, and Cassidy, the horticultural therapist, have created a year-round garden that’s also a place of refuge and respite.

Cassidy says that while some visitors with memory loss arrive at the Portland Memory Garden agitated — perhaps due to the unfamiliar location or even the ride there — they experience a 180-degree attitude adjustment by the time they leave.

“When they first arrive, they’re not very social,” she said of meeting many folks from the Portland Metro area on tours she leads around the Portland Memory Garden. “But by the time they leave, they are calmer, more restored, more wide-eyed, more social.” She continued, “Some caregivers say they heard their client talk more to me than they’d ever heard them speak before.” Some call their reaction “magical.”

Conversations occur around the soft feel of the lamb’s ear and the sage leaves, the dappled shade beneath the Japanese Stewartia, the literal insect zoo alighting upon the lavender, the silly sound made by Pigsqueak, and, in wintertime, the iris seed pods that double as rattles.

“To take a population pretty much formerly warehoused in facilities and to see them outside, well, it’s tremendous,” said Brian Bainnson, a Portland-based landscape architect and a lead designer of the city’s Memory Garden. He has designed more than 24 therapeutic gardens around the country.

The idea and practice of horticultural therapy for those with ravaged memories has been catching on, but its physical embodiment — memory gardens — are not easily accessed in this country.

The Memory Garden in Portland is considered a model and is one of only two on public lands in the United States. The other one — which Bainnson also helped design — is The Parker Garden at the Aurora Public Library in Aurora, Illinois. It was dedicated in 2015 by the Parker family three years after the death of their mother, Elaine Parker, who was a local educator and, later, sufferer of dementia. The special garden is enclosed and has no dead-ends.

Son J. Scott Parker expressed in a 2013 letter, “Public places were good for my mother, but, for my father, looking out for her in these places was difficult. They are beautiful and accessible to all, but they were not designed specifically for my parents’ situation.”

Other communities have established memory gardens, but they’re part of private residences, like assisted-living and memory-care facilities or hospitals’ grounds, like the one at Monroe Community Hospital in Rochester, N.Y.

Beyond the challenges of the actual construction of a garden are those involved with raising money to create and sustain a public memory garden. Bainnson calls those a “black hole.” The Portland supporters had to raise $500,000 “before a shovel could go in the ground,” Cassidy says.

Some communities around the country — for example, in Seattle, and Macon, Georgia — tried but failed to establish public memory gardens. (Seattle does have a memory garden in its backyard; it’s associated with the University of Washington’s Alzheimer’s Disease Research Center.)

“My goal is to see parks in every city in America for everyone to take out their loved one to, specifically for those with dementia,” said Bainnson, who is a leading member of the American Society of Landscape Architects (ASLA). The society is planning to develop guidelines to make public spaces more accessible for everyone, particularly those with Alzheimer’s and related dementias.

Bainnson realizes his vision could be years away, but he said the ASLA may develop guidelines to make public spaces more accessible to those with Alzheimer’s and related dementias.

Planned and designed gardens are invaluable resources for the growing U.S. population with fading abilities and memories, Cassidy says. In her experience and practice, she observes people who spend time in gardens “feel safe and secure and hopefully restored when they leave.”

My aunt, her caregiver, and I complete two revolutions around the Portland Memory Garden. Susan especially loved the bees and white butterflies seemingly attached to the lavender and the feel and scent of the sage leaves. We turned to leave the garden and the caregiver said, “That place is so peaceful,” to which my aunt smiled (which sometimes is tough to elicit) and  responded, “Yes!”

This post appeared first on MemoryWell News for the Ages