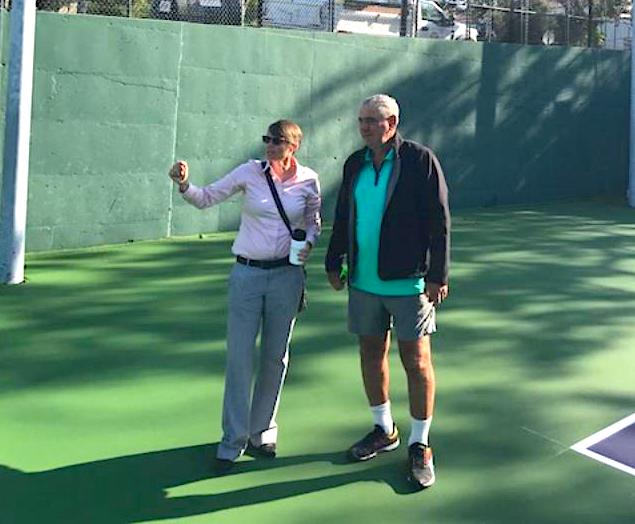 PIEDMONT, CA – After months of renovations to the Rec tennis courts, the City of Piedmont, PRFO and PHS Tennis are proud to invite the entire community to celebrate the Grand Opening of the new Corey Reich Tennis Center (CRTC) on Saturday, August 24 from 1:00-3:00 pm.

Opening ceremonies and brief remarks will be followed by a free youth clinic for ages 8-12 taught by PHS tennis players. Refreshments will be served.

While the entire project is not yet complete, the playing surface upgrade has been finished and the courts opened for Recreation Department clinic use on August 5. The courts will officially open on August 12 for public use and PHS practices.

“This project has been exciting and rewarding on many fronts. The work to date has gone smoothly and now we’re thrilled to share the facility with the community who helped make it happen and proud to have the upgraded playing surface ready for the PHS Girls Tennis season.”

The balance of renovations will take place over the coming months, including installation of new bleachers for spectators and tennis court benches for players, installation of new LED lights, installation of a new drinking fountain with water bottle filler, and a permanent Wall of Champions to recognize winning teams and players from Piedmont High School tennis teams as well as a new entryway.

Fundraising efforts have yielded more than $400,000 for the project, and donations continue to be welcomed. Various sponsorship packages, on-site recognition levels, and online donation information can be found at www.PRFO.org/Corey.

The new tennis center honors Corey Reich, a 2004 graduate of Piedmont High School and a member of the Men’s Varsity Tennis Team. In 2007 while in college, he was diagnosed with ALS, and has served as the Assistant Coach for the Piedmont High School Boys’ and Girls’ Varsity Tennis teams. Corey has been instrumental in the continued success of the PHS tennis program, whose programs have been the only ones to qualify every year for the NCS Team Championships since its inception in 1998-99.