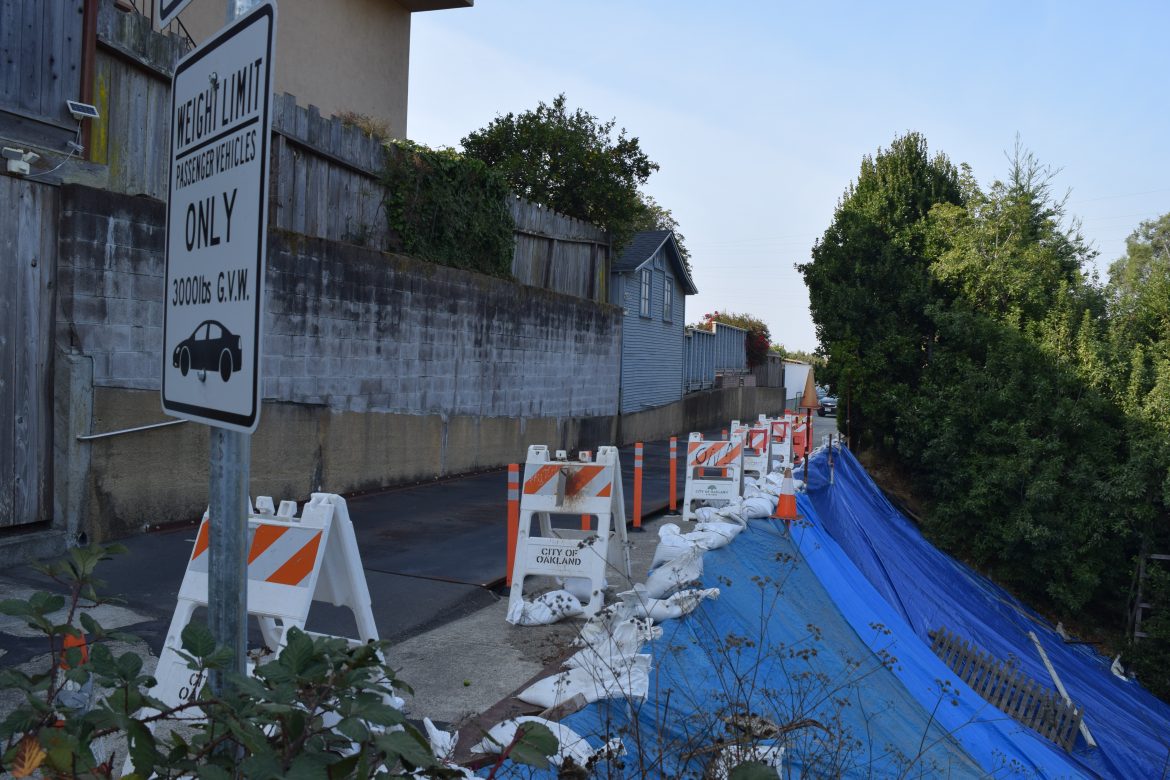 The City Council voted Monday night to start the bid process for making major repairs to Cavendish Lane, even though the damaged part of this narrow street is across the city limit line in Oakland.

The unanimous vote sets into motion a process by which city officials hope the short, narrow hillside street, which suffered major landslide damage in February 2017, will be fully rebuilt and fortified by the end of December. The city is expected to begin soliciting bids for the work by the end of this week,  said Piedmont Public Works Director Chester Nakahara. The work should take six to eight weeks, he said.

Cavendish Lane begins in Oakland, off of Park Boulevard, and ends just inside the Piedmont city limit line. No Oakland homeowners have been affected by the slide; the four affected homeowners at the west end of Cavendish are all in Piedmont. Cavendish is the only way for the residents to reach those four homes by vehicle. (See related: Road repair deal finally in the works for Cavendish Lane)

When the City of Oakland declined to repair the narrow street, Piedmont spent $54,000 on temporary repairs using steel plates, which remain in place to this day.

Last year, Oakland officials told Piedmont leaders it could be several years before they get around to fully repairing Cavendish Lane. So in December, the City Council approved an agreement with Oakland that allows the City of Piedmont to design and build a permanent repair for Cavendish Lane. It also calls for eventual reimbursement to Piedmont for costs to make the long-term fixes. Those repairs are expected to cost approximately $400,000.

“It’s been a long, trying process to get where we are,” Nakahara said Monday night.

Still, Nakahara said that $400,000 is not in the city’s paving budget. The city, he said, will likely have to pay for the work on the Oakland-owned roadway using its own general fund money.

Officials from both Piedmont and Oakland hope that reimbursement to Piedmont will come from a prospective lawsuit settlement. After the Cavendish failure, the City of Oakland has sued a property owner on nearby Trestle Glen Road — parallel to and below Cavendish Lane — for having performed improper land grading work. The lawsuit asserts that the grading work caused the damage to Cavendish. The hope is that money collected from the lawsuit against the Trestle Glen property owner will be used to reimburse Piedmont for the street repair work.

That lawsuit, Piedmont officials said Monday night, has not been decided, and there is no specific timetable for a decision.

Getting the work done as quickly as possible, several council members said, is critical so winter rains don’t create delays.

“We’re going to stress (with the contractors) the importance of ‘once we begin we cannot stop,’ “ said John Wanger, Piedmont’s city engineer.

The goal is to award the construction contract at the council’s Oct. 7 regular meeting, or perhaps even earlier at a special meeting, Mayor Robert McBain said, to increase the odds the work will be finished ahead of winter rains..

Even if the reimbursement prospects remain cloudy, council members acknowledged the work needs to get done.

“Sometimes you just need to take care of your own people,” McBain said. He and the other council members praised the four Piedmont families of Cavendish Lane for their patience.

It’s good that we’re at this point, and we’re thankful for anything to get this moving forward,” Susan Zieleniewicz said.

She and her parents said they won’t miss walking or driving across the plates, especially when they are rain-slicked. Garbage collectors will also be grateful, they said — now, they can’t back the garbage trucks all the way to the four houses; they have to walk across the plates to the houses, and make multiple trips shuttling big garbage containers from the houses to the trucks.

“Republic Services has been great about that,” Susan said about the garbage shuttles. “No one will miss that.”