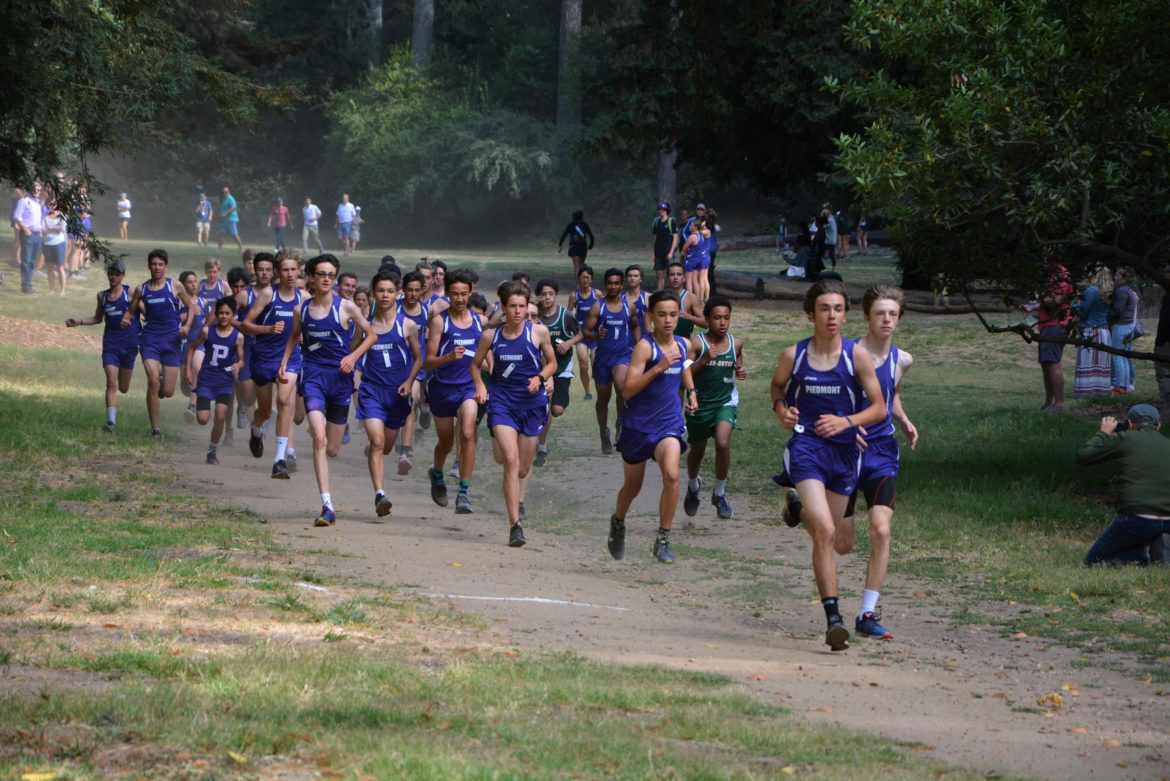 A solid mix of veteran returning team members and an infusion of new runners offers promise of another successful season for both the girls and boys cross country teams.

Many of the team members have been meeting over the summer to train, and are gearing up for the start of the regular season. The first meet will be the Lowell Invitational in San Francisco on September 7.  Head coach Jeanine Holmlund is now entering her 7th season as head coach, and has taken a team to the State meet every year.

The Highlanders will feature a squad of about 60 runners, including 40 boys and 20 girls. The boys team returns five of its seven varsity runners, while the girls welcome back four members from last year’s varsity seven.  For league purposes, the team competes in the Western Alameda County Conference (WACC), in the very competitive Foothill Division.  Based on Piedmont’s enrollment size, the team competes in Division IV at the North Coast Section (NCS) and State meets.

The Piedmont boys are looking to move up in the standings this year from their fifth place in 2018, while the girls team is hoping to make it seven consecutive years of qualifying for the state meet, an impressive accomplishment in terms of longevity.

The boys team will be led by sophomore Seamus Chamberlin-Carr, who had an outstanding freshman year, with a 16:40 time for 3 miles on the Hayward course and a 10:16 in the 3200 meters during track season.  Complimenting him will be Alex Weekes, Rowen Connelly, and Collin Mortimer, all juniors, and Max Podell, a senior.  Several boys from the JV or Frosh/Soph team could move up, and maybe even one of the many incoming 9th graders could contribute to the varsity team.

The girls have a competition-tested team that over the years has raced some of the top Division 4 teams in the State.  The team returns defending league champion Sophia Zalewski, a senior.  Zalewski also had an outstanding track season, where she lowered her 1600 meter time to 5:09.24, and her 3200 meter time to 11:19.42.  Supporting her will be the Black sisters, Maggie, a senior, and Ellie, a sophomore, plus Aya Troyer, a junior.  Several sophomore and junior girls may move up to varsity to round out the top seven runners, and one of the incoming 9th grade girls could also make varsity.

The team had an early look at their fitness level in a “scrimmage” with the cross country team from Head Royce.  The event took place on August 23 at Joaquin Miller Park, and the distance covered was 2 miles.  Head Royce has one of the better boys and girls teams in Division V, but for this meet were missing several of their top boys.

The girls ran first with 32 runners in the field.  Zalewski led from the start for Piedmont, closely followed by two Head Royce runners.  Maggie Black was also part of the lead pack, and after those four runners the race spread out.  During the race, Zalewski steadily pulled away from the Head Royce runners, and won by 10 seconds in a time of 12:42.5.  Piedmont had seven runners in the top ten finishers, with Maggie Black in 4th; sophomore Mara Lovric in 5th; Ellie Black in 6th; junior Adri McAuliffe in 8th; Troyer in 9th; and sophomore Molly McWeeny in 10th place.

The boys race followed the girls, and it was a true “purple wave” of 38 Piedmont runners engulfing the course.  Weekes took the early lead, with Chamberlin-Carr and Mortimer on his heels, and that’s how the race ended.  Piedmont boys took nine of the top 10 positions, with Connelly in 5th; Cooper Downing, a sophomore, in 6th; freshman Andrew Szerdy in 7th; sophomore Luke Alban in 8th; freshman Jack Zirkelbach-Ngai in 9th; and Podell in 10th.

Be sure to mark your calendar for the Piedmont Turkey Trot on Thanksgiving morning.  Planning for this annual event is underway.  Both the boys and girls cross country and track teams receive a significant amount of funding from this race, and the community’s participation is a key to making it a success.