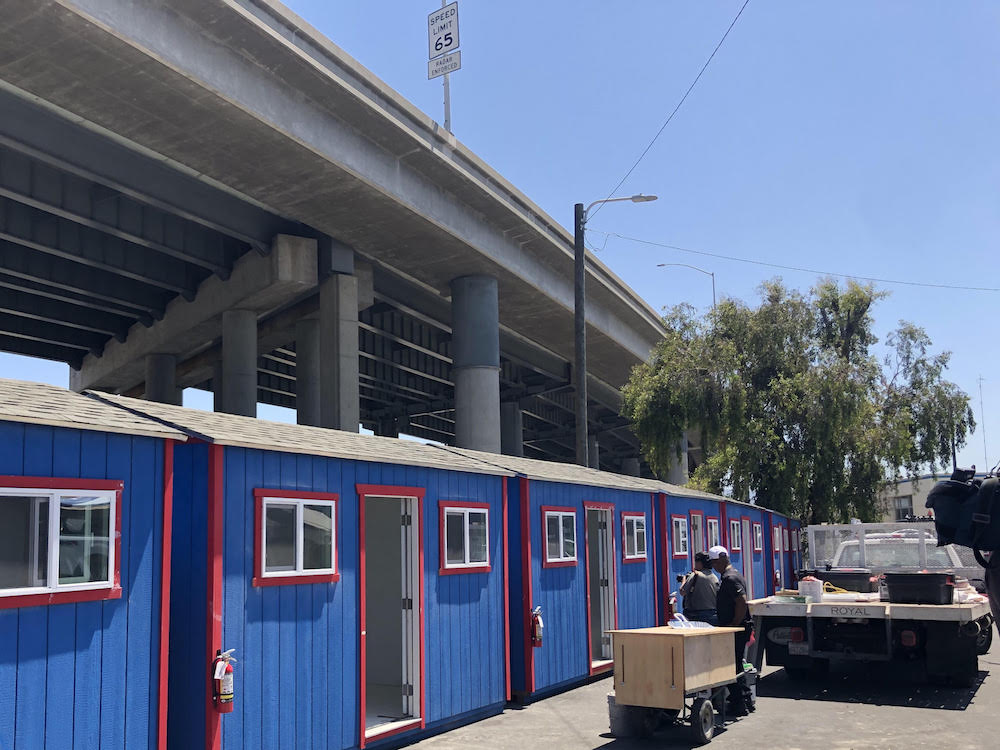 The city of Oakland built a series of

The site on Mandela Parkway was chosen to address the persistent public health and safety hazards at two large encampments along the Emeryville-Oakland border nearby. The residents of the two encampments will be offered space at the Mandela Community Cabins before the encampments are closed. The city will also reserve the remaining space at the back of the site for people living in recreational vehicles and a safe parking area will be opened at a later date to accommodate up to 17 RVs.

Caltrans, the property owner, has made the site available to the city for a $1 per month lease. Target, Sutter Health, Home Depot Foundation and the Oakland Metropolitan Chamber of Commerce have provided funding and associates from Home Depot stores volunteered to build ADA-accessible ramps and decks for the cabins. The site will cost $1.7 million per year to operate, funded by California’s Homeless Emergency Aid Program. The site will have approximately $250,000 in flexible funds to assist residents in overcoming any barriers to housing, including security deposits, clothing for job interviews or new jobs and transportation costs related to employment or reunification with friends and family. Caltrans will be creating 10 additional employment opportunities for the residents, the agency’s Bay Area Director Tony Tavares said.

“An estimated 3,000 people sleep on the street any given night in Oakland,” Schaaf said. She pointed out the need for federal government to focus on the crisis. The Mandela Parkway cabin site is the fifth one to open since December 2017. The city aims to help homeless residents to bridge into permanent housing through these temporary solutions. The four existing sites have served 350 people so far, with 63 people finding employment and 167 ending their unsheltered status by moving into permanent housing, shelter placement or reunification with friends and family.