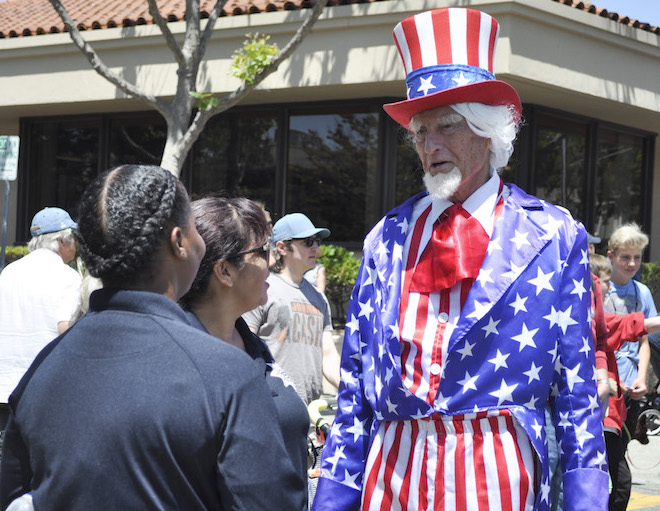 On Thursday, July 4, the Piedmont Exedra had the opportunity to chat with locals and visitors at the 45th Annual Fourth of July Parade. (Text has been edited for clarity and length.)

How he celebrated July 4th: Going to a BBQ with family friends and having burgers in Piedmont, possibly watching fireworks.

His favorite thing about July 4th: Seeing people in their Fourth of July colors who were excited to eat some pancakes. I’m excited to be in the parade representing PCSC and to wave tools at the crowd.

The most challenging thing about July 4th: The stress from watching pancakes start to dwindle and having to rush out more and more batches.

What being American means: Helping each other and coming together to lift other people up like what we’re doing today. I think everyone here has the capacity to help others in some way. There’s lots of efforts to make Piedmont better, but I think there’s a lot we can do to expand out and help people less fortunate than ourselves in the Bay Area.

How to be a better American and Piedmonter: By continuing to find new ways to help people and to bring more people in to [PCSC], which does a lot of community service locally. Just by starting to get people do stuff locally, and eventually, it gets bigger and bigger. That’s how larger-scale change happens: when everyone pitches in a little bit.

Letitia: I’m coming from out of town from Clayton to support my sister on Pride & Joy (Brenda Holloway Johnson). This is my first time here at this park.

Favorite thing about the July 4th in Piedmont: The people, meeting different characters. It’s good for people to come together and have fun – that’s what it is.

Jerome: I’m from Chicago originally. I like to hang out at different venues like this one. I love this place; it’s really nice. Pride & Joy, I’ve been following them for a long time. This isn’t my first time here [in Piedmont] for July 4th. I came one time about 15 years ago. It’s grown.

Favorite thing about the July 4th in Piedmont: I think the parade was nice; I enjoyed all of the antique cars – that was different.

How he celebrated July 4th: Visited family in Scotts Valley and watched the fireworks from the Santa Cruz mountains. We always have a lot of pride around this time of the year. I’m hoping next year we can invite the family to this pancake breakfast.

His favorite thing about July 4th: Running the pancake breakfast

The most challenging thing about July 4th: The stress of running the pancake breakfast

What being American means: The freedom that comes with being American. I think it’s very true that we do live in a free country. The Fourth of July is always a nice day to appreciate that and the good things in our country. Recently, we’ve been focusing on the bad, but there’s a lot of good things that we get to notice today.

What being a Piedmonter means: It’s an interesting crowd here and a lot of the parents grew up here or from the east or west coast. There’s different culture clashes but we still get together and get along.

How to be a better American: By taking political action, knowing who you’re voting for and what you’re voting for. One of the problems in America is that a lot of people focus on the presidential elections but not on the others. Trying to get a bigger turnout on those midterms matters.

How to be a better Piedmonter: Piedmont is a very tight-knit community so we all know people around here, but also getting to know people who are in our city council and city boards is very important – knowing them not just as political figures, but as friends.

How he celebrated: Going home to Danville and having a beer.

Favorite thing about July 4th: Seeing all the nice, smiling faces coming into the store and being nice to them.

How to be a better American: I work on myself every single day to make one day better than the last. I think this means focusing on being the best person you can be and not letting others that aren’t around you influence you. As a whole: wake up, pay attention and be present.

How he celebrated: This is my second time at the July 4th parade [in Piedmont]. I came last year. I am always very happy. Everything is good for me — all of the music, the people, the air. This community has very nice people, everybody is easy to friend, easy to talk to, easy to understand.

What being an American means: America is a very good country with a lot of job opportunities. It is an easy place to live because we have rights, religious rights. If you are strong and have good behavior, you have a lot of opportunities.

How to be a better American: I never ever complain. I work hard.

What being an American means: Freedom and equality; not just for people who are citizens, but for everyone. To be a better American and Piedmonter, I want to help others.

How she celebrated July 4th: Having lunch with my family and watching the fireworks together.

The most challenging thing about July 4th: Making the pancakes [at Veterans’ Hall] when there was a rush of people, and keeping up with that rush.

Her favorite part of July 4: Seeing people enjoy their breakfast while talking with others in a very welcoming and social environment.

All photos by Sarah Belle Lin