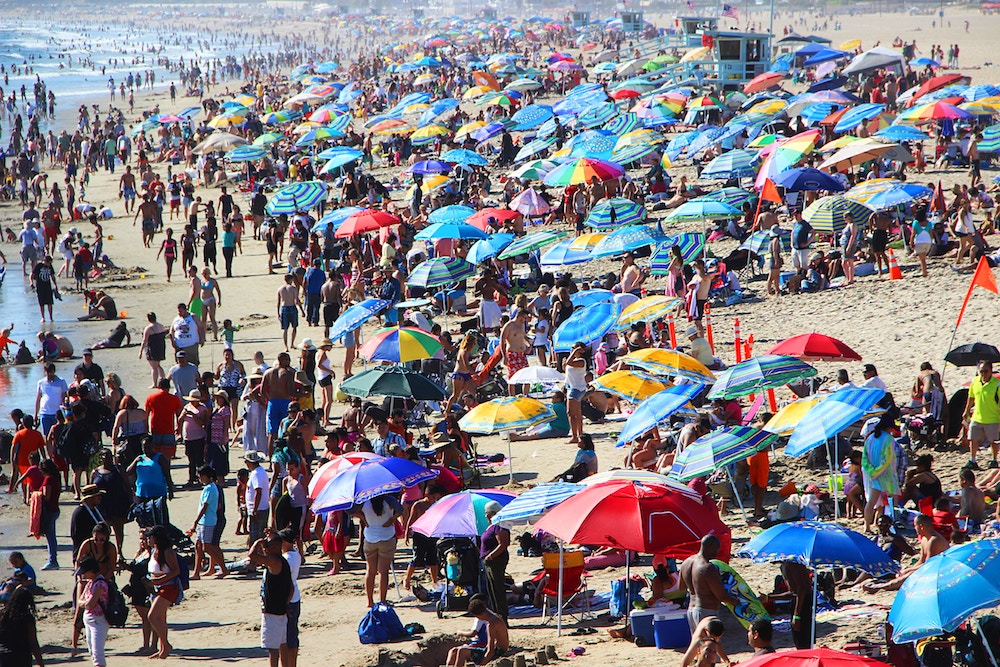 California, it has been written, is America, “only more so.” How much more so? That’s a complex question — and an important one. From immigration laws to school spending, some of our biggest decisions depend on an accurate count of this giant state’s population — of who we are, of whether we’re coming or going and of what we need from each other and our government.

Nationally, California’s population numbers determine how many seats we get in Congress. That clout is partly why our stakes are so high for the 2020 census. They also carry cultural and economic weight. One American in eight is a Californian, and as we go, so goes our economy.

These numbers tell stories: As a state we are getting richer, for instance, because the working class is fleeing the high cost of living. They define choices: How we prioritize government services is being impacted by the twin dynamics of a slowing birth rate and an aging population.

And if you’re curious about the future, that’s in the numbers, too. Wondering what the next generation of Californians will look like? Answer: Like this generation, only more so. We won’t just be racially diverse, but racially mixed. And in that picture, there’s a hint at America’s future, too.

So how many of us are there?

California, at last count, was home to an estimated 39.9 million people and counting. State demographers anticipate we’ll cross the 40 million threshold sometime this fall. For scale, it would take combining 21 of the smallest states plus the District of Columbia to match the size of California. And if you’re worried that Texas, the runner up with nearly 29 million people, is catching up, don’t fret: At its current growth rate, it would take Texas until 2047 to match California (assuming California doesn’t grow at all).

The state’s $2.9 trillion economy is the nation’s largest and the world’s the fifth-largest, surpassing the United Kingdom. Silicon Valley, Hollywood, sports franchises and other hallmark California sectors are usually credited for that. But we don’t just entertain, we also feed the nation. And people from around the world come to California to seek their fortunes. Los Angeles, San Diego, San Jose and San Francisco are among the nation’s most populous cities.

But living here comes at a high cost. There’s a housing crisis and widespread poverty exacerbated by a yawning wealth gap.

Where do we come from?

A century ago, people mostly migrated to California from midwestern states such as Illinois, Missouri and Ohio. But now, most people are coming in from Mexico, China and Taiwan, the Philippines and other countries: In 2017, there were 11 million foreign-born Californians. That’s more than quadruple the migration into the state from all sources, foreign and domestic, in 1920.

Today, 56% of Californians were born in the state. But the proportion of foreign-born residents (28%) is nearly double that of transplants from other states (16%).

Are we gaining or losing people?

Depends on how you look at it. California is losing residents to other states and as the population ages, but those losses are being more than offset by new births and foreign-born immigration. The number of Californians is still increasing, but our once-robust growth rate has slowed.

California added 186,807 residents overall in 2018, bringing the state population to an estimated 39.9 million people, according to the California Department of Finance. But while foreign immigration remains high, more Californians are leaving for other states than vice versa, and have been since the 1990s. Last year’s 0.47% growth rate was a record low. © 2019

If not here, where?

For the better part of three decades, Californians who leave the state have mostly gone to other parts of the country, notably to Texas and neighboring states such as Oregon, Nevada and Arizona. The dot-com bust, Great Recession and recently soaring housing prices all have helped fuel the exodus. Now more than 7 million people born in California call other states home.

One group of Californians isn’t looking for greener pastures: college graduates. Over the past five years, California has attracted 162,000 more adults with at least a bachelor’s degree from other states than it has lost, according to the Public Policy Institute of California. The Golden State stands alone in this regard.

Departing Californians tend to be younger and poorer — working class families in households whose breadwinners are under 35 years old and making less than $50,000, according to the latest migration data from the Internal Revenue Service.

All states experience shifts in population. California’s numbers are large because the state’s population in general is large. When departures are put into the context of the overall number of households, California ranks 50th in the nation. And if you look at net migration (people leaving compared to people entering), California ranks squarely in the middle of the pack at 27th. Nothing to boast about, but hardly a mass exodus.

This is a perennial question and a popular topic for pundits, but so far California is still attracting the rich for its economic opportunities. At face value, there are more than 1 million millionaires in California — more than any other state. San Francisco has the highest density of billionaires of any city in the world.

Now, there are concerns that overtaxing the rich will drive them out of state. So Charles Varner, associate director of the Stanford Center on Poverty and Inequality, took a look at what happened when California voters passed two millionaire income taxes in 2004 and 2012. He found more millionaires in California after the 2004 hike, but a slight tax flight response after the 2012 increase. Specifically, the state lost an estimated 138 millionaires out of 312,000 in that group.

“We often think that the only way for a state to be ‘competitive’ is to be like Texas — a low-tax, low-infrastructure, low-services state,” he and co-authors wrote. “But the reality is that the most competitive places in the U.S., the leading drivers of the economy, and the centers for top talent are New York and California — and they have been for generations, despite higher taxes on top incomes.”

Perhaps what the study did not capture is all the ways the rich can avoid California income taxes, including by avoiding residency. Generally, a taxpayer who spends more than nine months in a year in California will be presumed to be a resident. If a person stays less than six months — no more than 183 days — and maintains a home outside California without doing much other than visit Disneyland, then they can declare nonresidency.

But let the case of Gilbert Hyatt serve as a cautionary tale. Hyatt was a wealthy inventor who took up residency in Nevada just before cashing in on a patent. The state went after him and the dispute made its way all the way to the U.S. Supreme Court. It illustrates the extent to which the Franchise Tax Board will go to chase down tax dodgers.

Why does the census matter?

Census data is used to apportion the number of House members to which each state is entitled every 10 years. Congressional seats equal more power, and California holds 53 of the 435 seats. Census data also determines the population figures that in turn help determine the distribution of federal funding. A higher population generally means more federal money for a state.

This is why California’s Secretary of State Alex Padilla is pushing to ensure an accurate population count through his 2020 census initiative. It’s also why there has been debate around whether to include a citizenship question on surveys — a move that critics say would discourage immigrant participation and thus risk an artificially low headcount in this state.

Democratic state legislators already complain that Californians pay more in federal taxes than the state gets back in federal spending. The difference isn’t much: For every dollar of taxes paid in 2017, California received $0.99 in federal expenditures, according to a report by the California Legislative Analyst’s Office. But the national average is $1.22, and a smaller headcount could widen this disparity.

California’s birth rate has fallen to 11.7 per 1,000 people. Birth rates usually pick up after a recession, but California’s hasn’t yet.

…and why does that matter?

Lower birth rates can herald welcome social trends: fewer teen pregnancies, smaller families among people too poor to afford them, or more people attending college before becoming parents. But for local and state governments, they also have financial implications.

For example, public school districts receive money based on the number of students they serve; fewer school children in a community mean less school funding. If birth rates drop and enrollment declines, a district’s budget might shrink, even though costs remain the same for maintaining school infrastructure.

It’s one of a host of reasons for financial stress in Los Angeles, Sacramento and Oakland school districts. For instance, Los Angeles County is projected to be down 19,624 births over the next two decades. At $17,423 per pupil, that translates to $342 million in less revenue for the county’s schools.

California is quickly becoming the new Florida, thanks to a “silver tsunami” of older Californians as the population ages. According to state projections, by 2030 more than 9 million Californians will be over the age of 65. That is 3 million more than there are today.

Within a decade, one out of every five of the state’s residents will be seniors. And despite increased cost of living, baby boomers don’t seem to be leaving California. While some are fleeing to lower-cost states, the vast majority are spending their retirement in the Golden State. In 2017, California lost about 20,000 seniors to other states — less than 1% of the total senior population.

The graying of California means changes from health care to transportation and housing for which the state isn’t all that prepared. Gov. Gavin Newsom has called for a Master Plan on Aging to better coordinate the current patchwork of often-underfunded senior service programs, particularly long-term health care.

California is home to a quarter of the nation’s immigrants. That’s 11 million people — more than the entire population of Georgia.

More than half (52%) of California’s immigrants are naturalized US citizens, and another 34% have some other legal status, including green cards and visas. According to the Center for Migration Studies, only about 14% of immigrants in California are undocumented.

How do we feel about so many immigrants?

Californians tend to be supportive of immigration. Nearly three residents in four believe immigrants are a benefit to the state for their hard work and job skills, compared to 23% who believe they are a burden, according to a public opinion poll conducted by PPIC. The polling found bipartisan support for letting undocumented immigrants stay in the country.

This translates to governmental support. Earlier this year, Gov. Newsom took a trip to El Salvador to explore why Central Americans are fleeing their home countries and how California can help. And under the new state budget, California embraced extending health care to young adults ages 19-16, regardless of immigration status.

As debate continues over whether to add a citizenship question to the census, nearly two-thirds of Californians are worried that the federal government won’t keep their responses confidential. The concern is highest among Latinos.

California has become a minority-majority state with its increasing Hispanic population. But over the next few decades, the state will see a rising multiracial population.

Multiracial Californians are growing at a higher rate than any other group, and that’s only going to continue. According to state projections, in this past decade, people who are two races or more have grown by 22% in California — faster than Asians (10%) and Hispanics (14%). State demographers project multiracial residents will grow 21% by 2030.