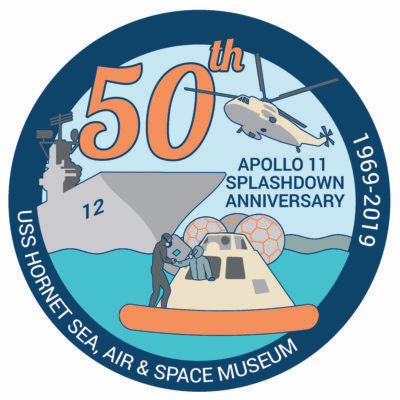 Space fever has firmly gripped the Bay Area as the countdown to the 50th anniversary of the Apollo 11 moon landing ticks ever onward. On July 20, 1969 America’s most famous extraterrestrial sojourners touched down on the moon after making the three-day trip from the Kennedy Space Center on Merritt Island, Fla. Astronauts Neil Armstrong, Edwin “Buzz” Aldrin, and Michael Collins crewed the mission, during which Aldrin and Armstrong spent almost 21 hours on the lunar surface. It was there that Armstrong, the first human to walk on the moon, uttered his famous phrase: “That’s one small step for man, one giant leap for mankind.” The men splashed down in the Pacific Ocean on July 24 and were picked up by the crew of the aircraft carrier USS Hornet, which is now a permanently docked floating museum in Alameda.

The executive director of the USS Hornet Sea, Air and Space Museum, Michael McCarron, says the old ship will host 8 days of events and festivities to coincide with all 8 days of the original mission to the moon. McCarron, who was nine years old at the time, remembers vividly where he was and what he was doing the day the Apollo 11 crew made history. “We got a bucket of chicken and sat down in front of the TV to watch this and we were in awe like everyone else,” McCarron said. “Astronauts were like heroes to me. They were like Willie Mays and Mickey Mantle.”

The USS Hornet’s big day will be on Saturday, July 20, when several of the ship’s crewmembers who were instrumental in plucking the Apollo 11 reentry vehicle from the Pacific in 1969 will be on hand to address the public. For more information about the USS Hornet’s events people can visit its website at https://www.uss-hornet.org/splashdown50.

Other Apollo 11 anniversary events are taking place at the Chabot Space and Science Center in Oakland, where on July 20 people can experience simulated lunar missions, a countdown to the landing, moon-themed hands-on activities and demonstrations throughout the day. At night, the center will host an adult-only “Apollo Party,” with “moon cocktails,” “space karaoke” and talks from NASA Ames Research Center Astrobiologist Julia Demarines. A list of the center’s festivities can be found here: https://chabotspace.org/events/events-listing/moon-month/

On July 19, the San Francisco Symphony will host “Out of this World: A Celebration of the 50th Anniversary of the Moon Landing,” during which attendees can enjoy various space-themed scores from movies like Star Wars, Star Trek and Close Encounters of the Third Kind. Before the music starts, people can mingle in the lobby with retired astronaut Leland Melvin, who will co-host the event.

At the Exploratorium in San Francisco, people can start the anniversary revelry at 10 a.m. and party on until 12 a.m. Visitors can check out newly restored footage of the moon landing, orbit a detailed 16-foot sculpture of the moon, watch films and enjoy all manner of hands-on space-travel demonstrations. A list of the Exploratorium’s activities can be seen here: https://www.exploratorium.edu/visit/calendar/apollo-11-50th-anniversary