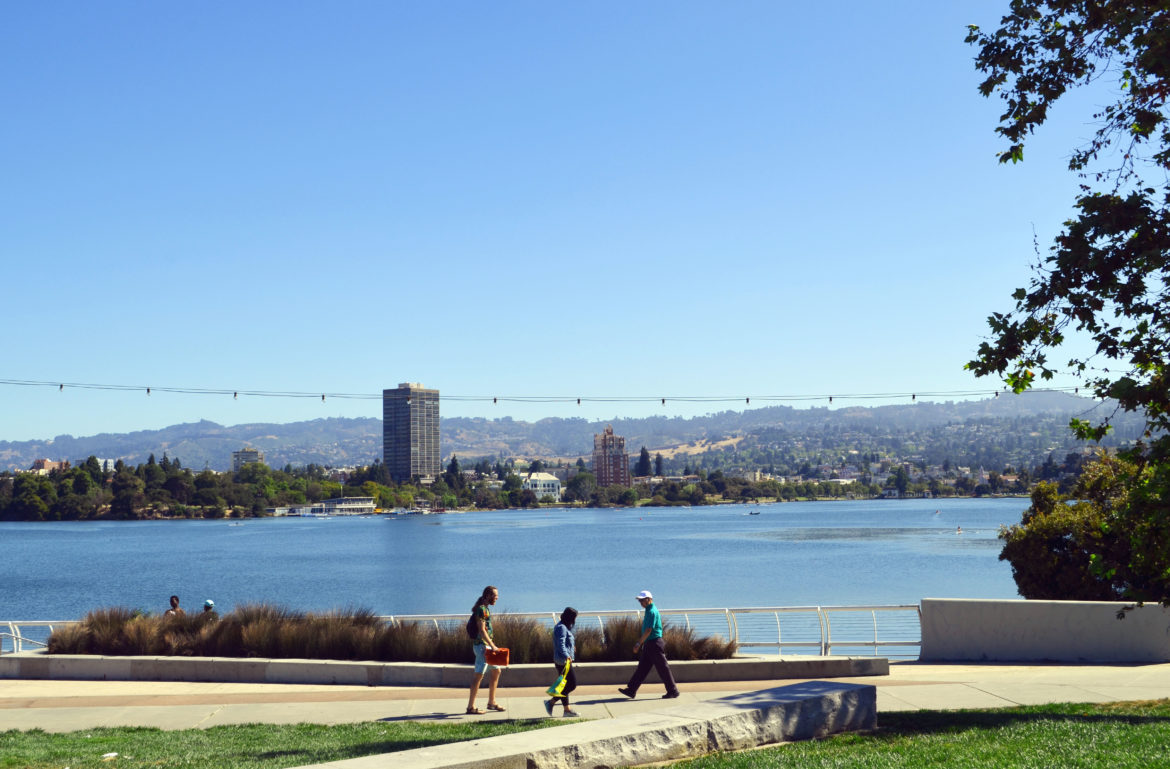 To any observer, the growing numbers of homeless villages spreading across Oakland and the Bay area in the past year remain a troubling sign that despite ample attention, homelessness is far from under control.

One of the few places where efforts to address the issue are visible is the Lake Merritt area.

There, multimillion dollar city-financed upgrades and forced relocations have largely succeeded in transforming the waterfront both for Oakland residents and the unhoused people who have made the lake’s shores their home.

Along with the building of temporary shelters financed through a partnership between the city and private donors, general lakefront improvements financed through a bond measure, and cooperative work by several non-profits, the lakefront has worked to avoid the trash-strewn fate of some other city waterways, and evicted most of the 21 tent camps that surrounded the lake one year ago.

Part of that has come from old-fashioned elbow grease and the active concern of friends of the lake scattered across Oakland, including Piedmont.

“It’s a meeting place for everybody no matter where you’re from,” Lake Merritt Institute executive director James Robinson said. Robinson heads the Clean Lake Initiative, which hosts water cleanup events Tuesday and Saturday mornings. A group of Piedmont residents regularly attend Tuesday clean ups as the initiative’s “A team,” and Piedmont school students are frequent volunteers. Lake Merritt Weed Warriors and the Oakland “Adopt a Spot” Program are other notable community-based leaders maintaining the land around the lake.

Perhaps the most notable innovation on the Lake is the installation of “tuff shed” housing units, miniature lightweight but sturdy homes that typically house up to two people.

The Lake Merritt tuff shed camp is one of multiple sites city officials refer to as “cabin communities” that have since the start of 2018 housed a total of 359 people, according to Oakland Assistant to the City Administrator Joe DeVries. Oakland is also preparing to add two additional tuff shed sites this year, one on 5th St., eight blocks from the Lake Merritt community, and another on Mandela Parkway in West Oakland.

According to DeVries, the existing communities currently house 98 people and have seen 265 exits. Of those, 177 have been to permanent or transitional housing. But over 80 people left these communities voluntarily or due to rule violations, placing many back on the streets.

Across Lake Merritt Blvd. in the former Kaiser Auditorium parking lot, 20 double-occupancy tuff sheds house people who formerly lived in tents near the lake. This transitional housing was designed to eliminate the 21 encampments surrounding the lake that the city documented in August 2018.

DeVries said in comparison to encampments, the city’s tuff shed communities are a safer place for members to come home to.

Tent camps regularly experience homicides, fires and other crime. Tuff sheds have locking doors, and members are guaranteed meals and access to a case manager. “I’d rather put people in cabins than leave them on the streets in unsafe encampments,” DeVries said.

Talya Husbands-Hankin, an Oakland Homeless Advocacy Working Group member, said she has built relationships with the unhoused living around the lake for the past four years. During that time, she said, encampment members built “communities of care” in which they helped one another fulfill their basic needs.

However, city-led evictions from tent camps test the limits of the city’s capacities, says Husbands-Hankin.

“When the city comes in and evicts people they interrupt those communities of care. Their intentions are to move people, as communities, into spaces that are safer, but the reality is that there is never enough space.”

Husbands-Hankin said evictions of some camp dwellers earlier this year inevitably lead them to move to other “inappropriate” places nearby and made it harder for her to find and support those she has connected with in the past. Formerly homeless Berkeley resident and homeless advocate Guy “Mike” Lee was present at the lake encampments’ forced evacuations on Feb. 14 of this year. He described the day as “overcast and cold” as he watched city employees evict encampment members from across the street. He added his power wheelchair died due to water damage as a result of the day’s downpour. He went on Twitter later that day and called the evictions “one of the most disgusting things” he had ever seen.

Ollie Harris and his partner were one of those couples. Harris said they were living in an encampment at the lake when they decided to enter the program. They lived in a tuff shed for about a month before they were given the opportunity to move to permanent housing in Stockton. Harris said they made the move and lived there for about five months.

But Harris said the home they moved to was quickly infested with roaches and mice, and a shooting three doors down made them decide to leave. “You don’t take somebody from the streets and then just dump them in the ‘hood,” Harris said. “I’d rather be in the tent. So, we’re back at the lake.” Husbands-Hankin reconnected with Harris and his partner to give them blankets last Wednesday.

DeVries pointed out that the issues Oakland faces in regard to serving those experiencing homelessness plague the entire state of California.

He said although the existing and proposed community cabin sites will not solve the issue, they will try to address some of its “most dire symptoms.”