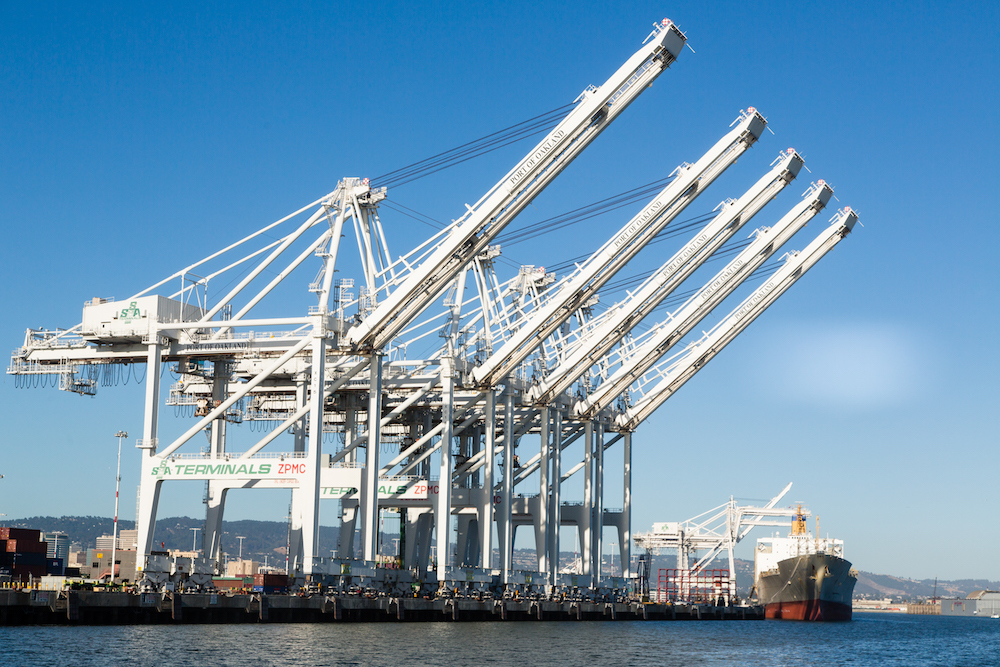 The Port of Oakland is adding its voice to the growing choirs of criticism aimed at President Donald Trump’s ongoing trade war with China. On Friday, Port of Oakland Executive Director Chris Lytle announced that he sent a letter this week to U.S. Trade Representative Robert Lighthizer warning that Trump’s tariffs and China’s counter-tariffs pose a major long-term threat to the economy. “We remain concerned about the impact that tariffs will have on the health of our economy,” the letter states. “To the extent that other countries are stepping in to provide goods that are exported by U.S. businesses to China, the long-term potential for domestic companies to access one of the world’s largest consumer markets will be severely hindered.”

The letter was sent as Trump considers an escalation to the trade war via an additional 25 percent tariff on $300 billion in Chinese imports. China accounts for 37 percent of Oakland’s total trade volume, including large quantities of US farm exports, “which are particularly vulnerable to Chinese tariffs,” according to Lytle. “The Port of Oakland continues to hear from our partners in the supply chain about specific impacts to their unique sectors,” the letter says. “It’s clear that the overall negative long-term potential impacts of these tariffs on the international movement of agricultural products, manufactured goods, household items and retail products is real.” Lytle also asks the Trump Administration to exempt Chinese cargo-handling equipment from any new tariffs, as the port awaits the delivery of three new ship-to-shore cranes from a Shanghai-based manufacturer.

Lytle’s letter joins a flurry of similar correspondence from port leaders in Los Angeles, Long Beach, Seattle and Tacoma, Washington, who all worry that a new volley of U.S. tariffs will result in additional retaliatory measures from China. “The imposition of tariffs on essentially all Chinese imports will create economic harm to our state’s employers, workers, residents and international partners,” according to a letter to Lighthizer signed by both Port of Seattle Commission President Stephanie Bowman and Port of Tacoma Commission President Clare Petrich. The Trump Administration “is simply throwing good money after bad by imposing these increased costs on domestic businesses and consumers,” the letter says.

Eugene Seroka, executive director at the Port of Los Angeles, wrote to Lighthizer, that the trade war could do lasting harm to the entire West Coast economy. “Over the long term, the prolonged presence of tariffs on trade with China may cause American businesses to source materials and goods from other countries, which may result in shifting of trade volumes away from the U.S. West Coast and the Los Angeles trade gateway,” Seroka’s letter says.

The port leaders’ missives coincide with a letter to Trump signed by 600 U.S. business leaders — including Lytle — asking the president to stop the trade dispute with China. The letter says the “tit-for-tat tariffs” will have “a significant, negative and long-term impact on American businesses, farmers, families and the US economy.”

The roughly year-long trade war started when Trump initiated a 25 percent tariff on $50 billion of Chinese imports, which ultimately led to the U.S. imposing a 12 percent tariff on $250 billion in Chinese goods and then an additional 25 percent tariff on a separate set of imports worth $200 billion, according to a report from the Peterson Institute for International Economics. In response, China has increased tariffs on U.S. goods to an average of 20.7 percent, while lowering tariffs on the same goods from other countries to 6.7 percent, according to PIIE.