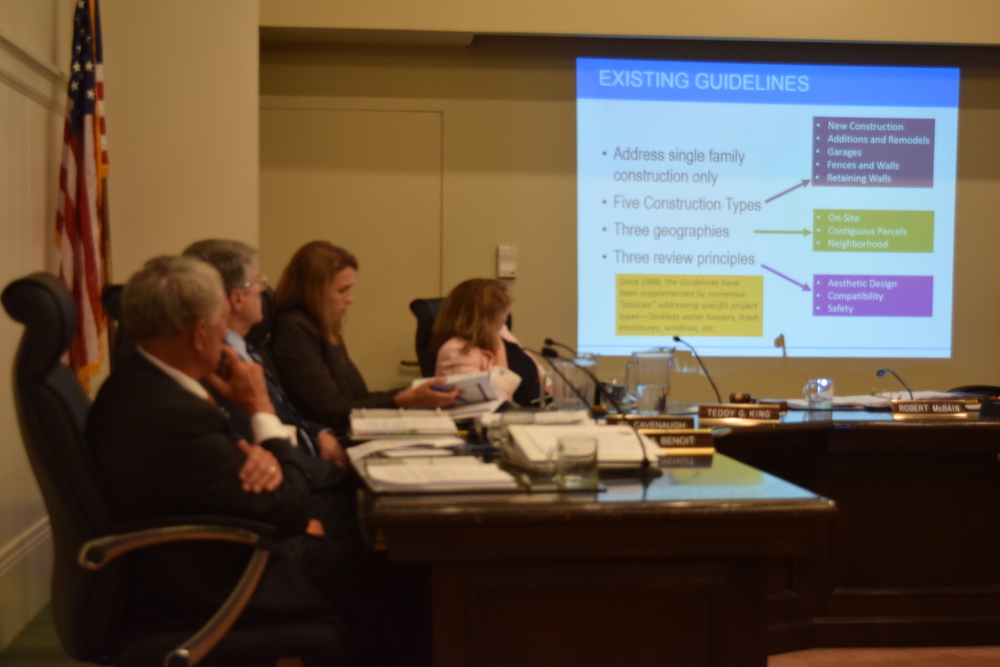 Piedmont City Council members and administrators take in a presentation on the city's updated and improved design guidelines.

“The guidelines do not need fixing — they were not broken,” city Planning Director Kevin Jackson told the council. It’s a matter of transferring the old guidelines into something more modern, a more compatible medium with the computer age than the city’s existing 1988 document that pre-dates modern graphic design and publication software and relies on hand-drawn sketches rather than photographs.

There will be something new, however — guidelines for structures including accessory dwelling units, multifamily housing and commercial development. And more current building and architectural trends also will be addressed with the reworked guidelines.

Design guidelines in Piedmont, or any city, provide an important benchmark for evaluating and approving new construction, additions, and remodels. They help cities maintain the character they desire.

In April 2018 the city hired consultants Barry Miller and John Schlesinger to help city staff update the 1988 design guidelines. This 10-month effort included an online public survey, stakeholder meetings and a focus group. The Piedmont Planning Commission approved the revamped guidelines on May 13.

Miller told the council Monday night that a key mission of the reworked guidelines is to continue to preserve the city’s architectural heritage while bringing that work into the modern world.

Council members praised the update. Councilman Tim Rood, himself a planner with the City of San Jose, called the new guidelines “excellent work,” and Miller told him the new guidelines format– unlike the existing one — is essentially a living document that can be easily updated or changed with council approval.

Miller said the new guidelines format includes many photos of structures from Piedmont and elsewhere, some of them showing the “do’s” of design and architecture, and others illustrating some of the “don’ts.”

“All of the ‘do’ examples are from Piedmont … I won’t say where the ‘don’t’ pictures are from,” he said.