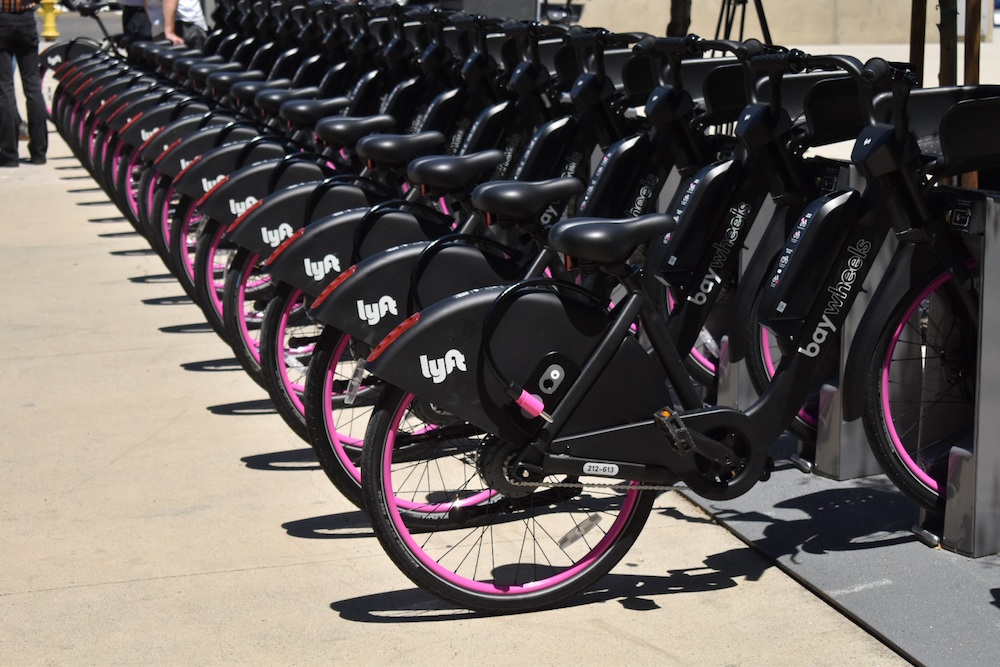 The electric bikes can be placed in a docking station or locked to bike racks, and will soon be available in San Francisco, Oakland, Berkeley and Emeryville. Caroline Samponaro, Lyft’s head of public policy for bikes and scooters, said the company owns both brands but decided to create a Bay Area-centric name after receiving complaints that Ford GoBike sounded too “corporate.”

“Bay Wheels reflects the public transit nature of this system, it’s a true municipal partnership serving to extend the reach of public transportation in San Jose and the region,” she said during the launch at City Hall Tuesday afternoon. The bikes start at $2 per ride, and support the “Bikeshare for All” program, which offers $5 annual membership based on income and currently includes over 4,200 San Jose residents. Last week, Lyft also became the first company to be officially permitted in San Jose for its electric scooters. Bike docking stations will display pieces from local artists, and Lyft is currently in the process of transforming old blue GoBikes with their artwork.

Mayor Sam Liccardo, known for promoting San Jose’s bike culture, hopped on the new technology after the launch to try out newly protected bike lanes on Fourth Street. He and city council members said the bikes will improve mobility for all residents. “(E-bikes) enable a lot of folks who may have a little challenge getting a greater distance, or perhaps with a few hills, still be able to access bicycles and bike infrastructure as a reliable source of commute,” Liccardo said.

There are currently more than 40 bike stations throughout downtown, with several more in the pipeline for the city. The bikes travel at a maximum speed of 18 mph, and were first introduced to the city last year.