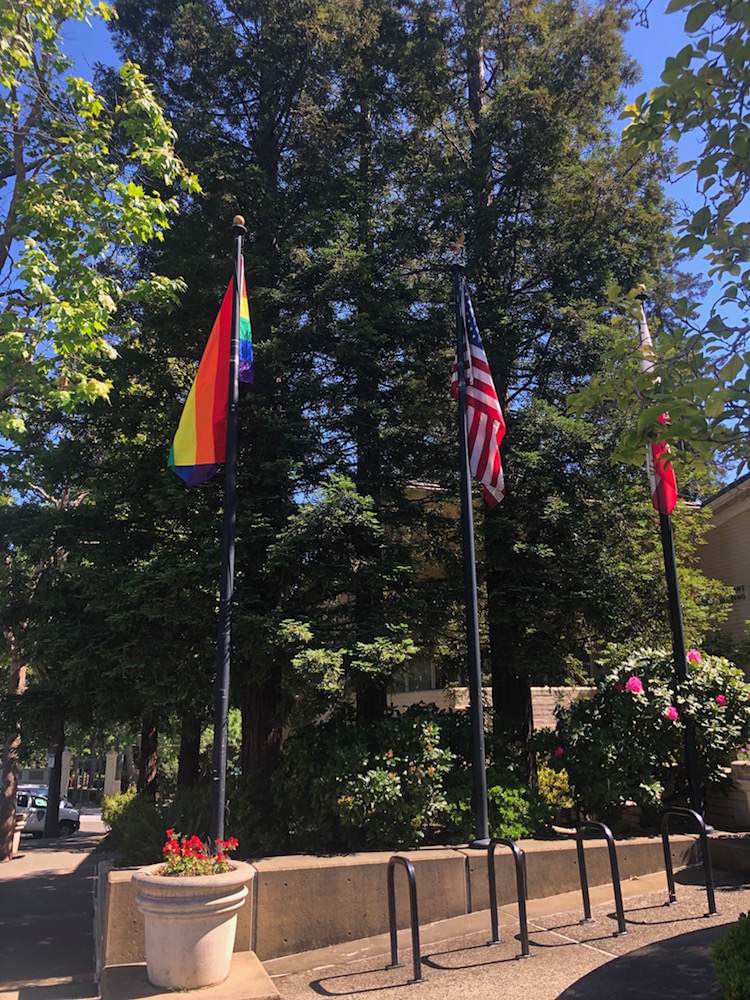 The Pride flag outside Veterans' Hall in honor of Pride Month

Following in the recent footsteps of many cities in the Bay Area and beyond, the City of Piedmont will fly the rainbow flag during the rest of June, which is LGBTQ Pride Month.

The City Council voted 5-0 Monday night to formally observe LGBTQ Pride Month — the first time the Piedmont council has done so — and to fly the rainbow flag for the rest of June. John Tulloch, assistant city administrator, said the flag was set to be raised for the first time Tuesday outside the Piedmont police station at the corner of Highland and Vista Avenues. It will replace the city flag for the rest of the month, Tulloch said.

The matter was brought to the Piedmont council by Councilman Tim Rood, who identifies as bisexual and is active in the LGBTQ community. He said the flap in the City of Dublin, where on May 21 the City Council voted to support a resolution but not to fly the flag, prompted him to take action in Piedmont. To him, it’s squarely a matter of civil rights.

“It’s a happy moment and a moment to celebrate,” said Rood, noting that this month is the 50th anniversary of the Stonewall Uprising, when members of the LGBTQ community held violent demonstrations in response to police raids of the Stonewall Inn in the Greenwich Village neighborhood in New York City. Those demonstrations are widely regarded as seminal moments in the LGBTQ rights movement in the United States.

“It’s our trans(gender) friends who currently need our support the most,” Rood said.

The elected bodies leading many East Bay cities and other governmental entities have over the past several weeks have embraced observances of  LGBTQ Pride Month, mostly through formal declarations and/or flying the rainbow flag from a city flagpole for a day, or a few days, or a week, or a month.

A few cities have stuttered in their recognition of LGBTQ Pride Month. Antioch, while approving a support resolution, is scheduled to consider on June 11 a separate resolution to fly the rainbow flag. And then there’s the Dublin situation, where a City Council majority said they didn’t want their city to start politicizing their official flag-flying. Since then, at least two of the three council members who voted “no” have said they’ve changed their minds, and that the rainbow flag will soon fly over Dublin.

There was no such drama or hesitation in Piedmont, though. The motion hadn’t originally even been planned for discussion, as it was on the City Council’s “consent calendar” of items considered routine and noncontroversial. Rood asked that the item be pulled from the consent agenda to allow him to say a few words about it before a vote was taken.