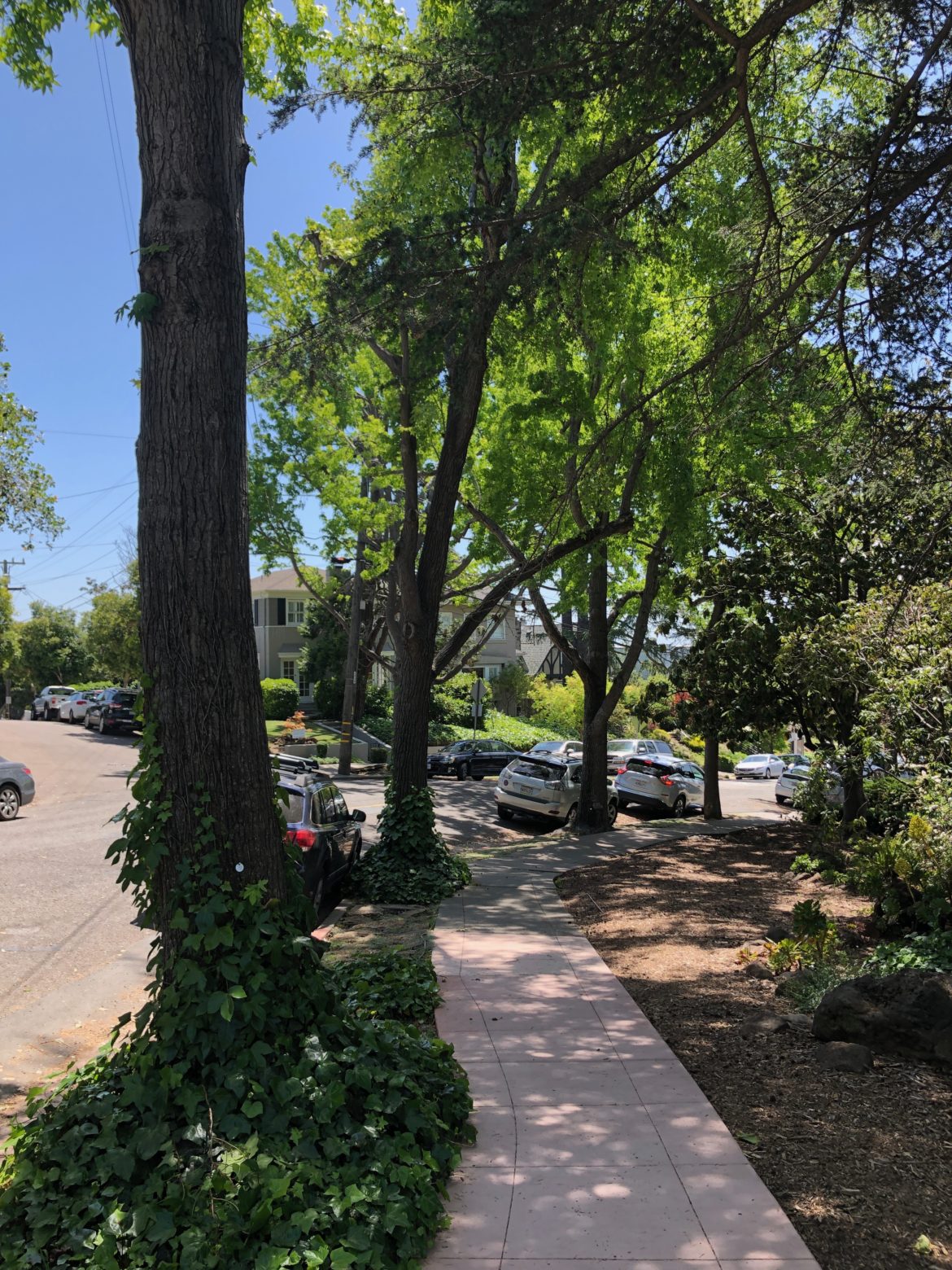 View down Magnolia Ave near El Cerrito where some liquidambar trees are tagged for removal.

Fewer street trees than originally projected will need to be removed when a paving project begins this month on Magnolia Avenue. The issue now is finding replacement trees for the ones to be removed that are acceptable to residents.

An update on the project and public outreach involved was made Wednesday to the city Parks Commission by Public Works Director Chester Nakahara and Parks and Project Manager Nancy Kent. The update included the results of a May 18 community walking tour to examine each of the trees and see if any of the ones initially slated for removal could get a stay from the chainsaw.

More than 40 people took part in the tour despite wet weather.

“We pointed out evidence of why they need to be removed,” Nakahara told the commission. “It was really informative and educational for everyone to actually see our reasoning.”

Work will include repairs to paving, curbs, gutters and sidewalks, and any work needed to make everything ADA compliant.

Under the standard evaluation process the city has used in the past, the initial plans determined that 45 street trees needed to be removed. But when residents questioned the number the city reevaluated the project and determined that alternatives could be used that would at least temporarily lower the number of doomed trees to 18.

There may be some additional trees planted to “fill holes” in the canopy, Kent said.

“The intent with this alternative approach is to focus primarily on achieving both street and curb drainage, while slowing down the impact of the urban forest on Magnolia Avenue changing dramatically under one project,” Nakahara wrote in his report.

“The remaining 27 of the 45 trees originally shown to be removed can be placed in a second phase of removals and worked around for the paving project,” the staff report noted.

Some of the street trees to be removed are liquidambar, others had been replaced more recently with Chinese pistache, which have been slow to mature.

In their place, the city has compiled two lists of possible replacements, eight varieties of shorter trees designated “utility friendly,” and two types of taller trees for portions with no power lines overhead.

The commission will do further study of replacement options. “The last thing we want to do is get another wrong tree,” said commission member Betsy Goodman, who encouraged city staff to continue outreach to the neighborhood. Drought tolerance is also a consideration, she added.

A list of the trees being considered and their attributes is online at http://www.ci.piedmont.ca.us/magnolia-street-tree-designation/ and the city invites written comments about the options, which can be addressed to the Piedmont Park Commission, c/o Nancy Kent, 120 Vista Avenue, Piedmont, CA  94611 or send an e-mail to nkent@piedmont.ca.gov.

Nakahara said work on the Magnolia Avenue project is scheduled to start on June 24.

Trees on lower Grand Avenue were also discussed during an update to the commission on the triangle and median landscape project.

Staff members went door-to-door in the neighborhood to hear residents’ comments about the project, with a desire for more screening from the avenue and more flowering and evergreen trees topping the list.

The project will include upgrading existing irrigation, Kent said.

Tree removal on Grand is scheduled to begin in mid-June and the design of new planting is being finalized.

Sidewalk work on Oakmont Avenue will begin after July 4 and residents will be notified so they can make parking arrangements. There will be 17 trees taken out and 24 new trees being planted.

Other updates included the path restoration at Dracena Park, where five trees (four eucalyptus and one Monterey pine) were deemed a hazard and removed in February and work to renovate a path in upper Dracena has resumed after being suspended in May due to wet weather. “Drainage to address the exposed springs will be installed and staff is working towards an installation of a permeable path material,” according to the staff report.