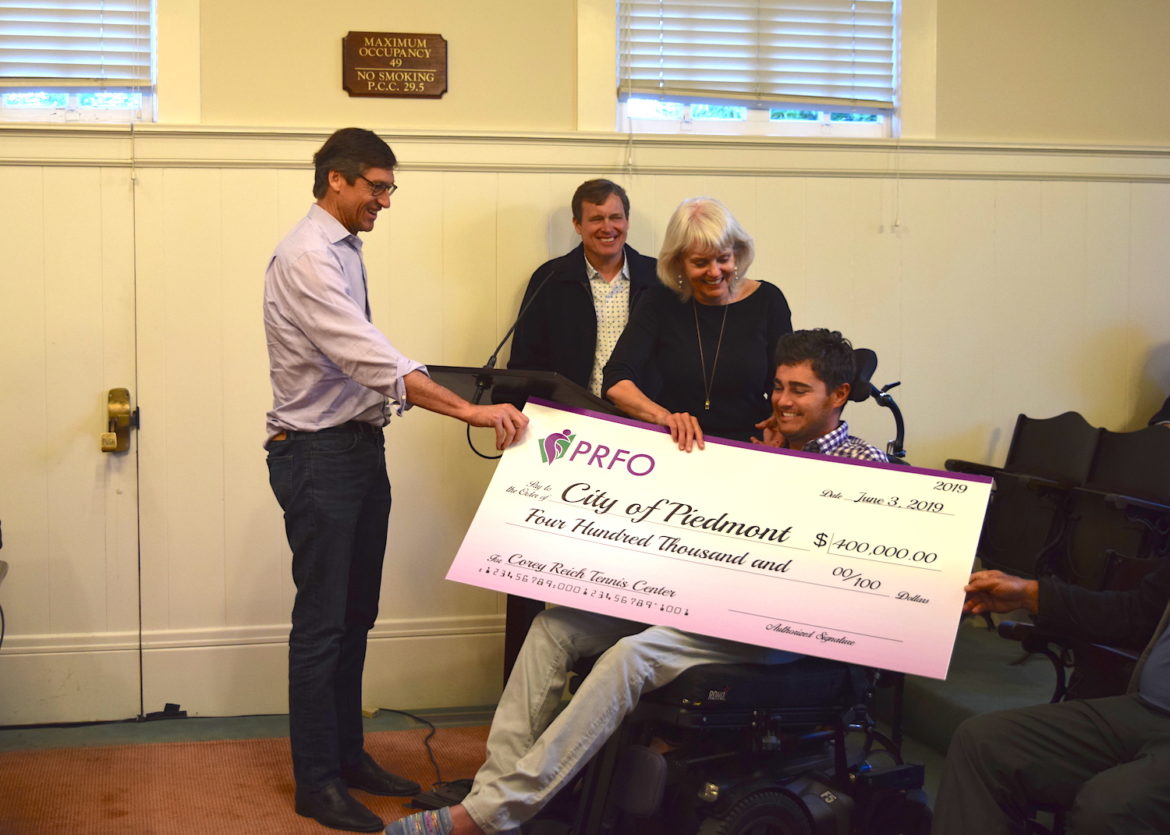 PIEDMONT —–The City Council on Monday approved a $377,532 contract for renovation of the Piedmont Recreation Center tennis court complex this summer, and also received a huge gift from the community that more than covered that contract.

The $400,000 check from the Piedmont Recreational Facilities Organizational was the impressive first fruits of a community fundraising effort to establish the Corey Reich Tennis Center.

“I’ve never been involved in anything that brought such immediate support; it was mind-boggling,” Steve Collins, president of the PRFO, told the City Council Monday night. “There was support from generations of Piedmont tennis players.”

In November, the City Council — having already committed enough money to make basic fixes at the Recreation Center Tennis Courts to make them “safe and playable — agreed to help facilitate a more significant campaign to overhaul the courts, and establish a long-term fundraising campaign for major improvements and ongoing maintenance.

The $400,000 donation will cover most of the overall project budget — $415,285, which also was formally adopted by the council Monday night.

The fundraising drive began in earnest at the end of January, and is most of the way to its initial $500,000 goal. City Recreation Director Sara Lillevand said she hopes the courts are ready for students to use when school resumes in the fall.

The tennis center project is named for Corey Reich, a 2004 graduate of Piedmont High School and member of the school’s men’s varsity tennis team. He was diagnosed with arterial lateral sclerosis — Lou Gehrig’s disease — in 2007 while attending Middlebury College in Vermont. He is coach of the Piedmont High School men’s and women’s varsity tennis teams.

Corey and his parents Ted and Wendy were on hand for Monday’s contract approval and check presentation. “It means the world to all of us,” Ted Reich told the council.

Mayor Robert McBain said there is an “impressive list of people” who have helped with this project. He echoed Collins’ observation that Piedmonters were fast to get behind the expanded tennis courts project.

“There was never any ‘Why are you doing this?’ — it was all ‘I got it – what a good idea!’ “ said McBain, adding that both a very good plan and the right people carrying it out put the plan over convincingly.

McBain, in good fun, pointed out that the oversized PRFO donation check didn’t have an oversize signature on it, to which Collins replied, “Don’t worry, we’re good for it!”

In other racquet sports news, the City Council on Monday approved putting up to $50,000 toward refurbishing the asphalt sports courts at Piedmont Middle School and prepare them for use as a pickleball facility that could be open to the community during non-school hours. The facility could also host tournaments and classes in the future, Lillevand said.

The courts would continue to be set aside for middle school students during school hours, as they will remain marked for several sports. The basketball hoops there now will remain.

This joint city-school district effort, city officials said, will result in a better facility for students and a third new pickleball court in a city where the popularity of this sport — a small-scale version of tennis — has been growing rapidly. Piedmont resident Rick Schiller said seniors, especially, have embraced the sport.  “Piedmont’s embracing pickleball on several levels,” he said. The city has received checks and pledges from local pickleball players totaling $1,650 to help maintain the courts

Lillevand said the PMS courts haven’t been resurfaced “in decades,” and that they are overdue for the work, which will cost approximately $60,000. The Piedmont Unified School District will pay for anything over the $50,000 city allocation.

This joint use agreement was the result of several months of work by the city Recreation Commission’s Subcommittee on Tennis Court Use and Pickleball, one of its jobs being a way to find space for a burgeoning sport in a small city with very little spare room for more sports courts.

The city is partially through an eight-month trial of pickleball at two other locations, Linda Beach Play Field and Hampton Park. Lillevand told the council the noise issues that have been brought up concerning Beach shouldn’t be a concern at the middle school.