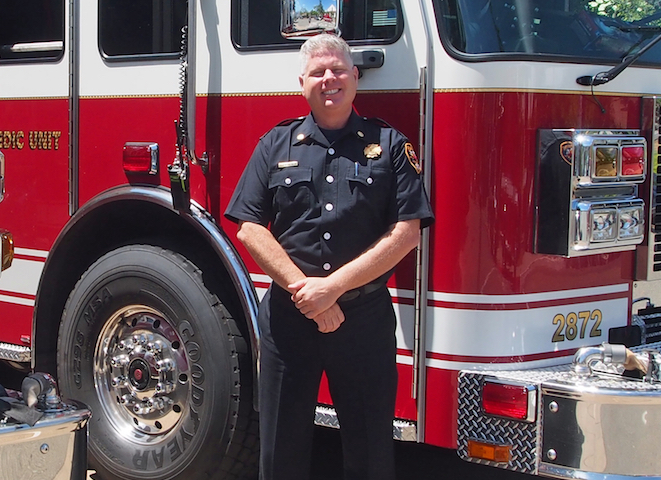 You’re going to be hearing a lot from the Piedmont Fire Department during this fire season, which will probably be most of the remaining year. The message is important: The likelihood of a wildfire is increasingly a matter of when, not if, and the most basic preparation begins at home to prevent devastation similar to what California saw just a few months ago.

Bret Black, 49, had been on the job as Piedmont fire chief a little more than a month when the Camp Fire broke out in Butte County on Nov. 8, 2018, a time of year when fire season was traditionally thought to be over.

“I think the Camp Fire changed things a little bit,” Black said of the blaze that lasted more than two weeks, consumed more than 150,000 acres and destroyed some 14,000 residences and more than 500 commercial buildings, including the entire town of Paradise. “After Paradise and even in years past, they would say this is the worst wildfire season ever,” Black said. “Each year we see a new benchmark. As far as large campaign fires, we see not only the number, but the size and complexity increase.”

Piedmont firefighters were on the front lines of the Camp Fire and experienced the devastation. “Piedmont sends resources all over the state, that’s unusual for a city and department this size,” Black said. “We were one of the first crews on scene at the Camp Fire. We saved some homes, but lost some, too.”

What the Piedmont department is working on now is a full-scale effort to inform the community that the same kind of disaster can happen here. “It took us five to 10 years to realize,” Black said. “We kept waiting for fire season to return to normal, but that’s not going to happen. This is the new normal.”

A number of factors contribute to the situation that Piedmont and other jurisdictions are facing, including prolonged drought, budget and personnel issues, climate change and an increasing number of people choosing to live in wooded areas, he said. “You have a lot of people moving into the urban wildland interface, increasing the threat of interaction,” Black said. “I think climate change is a factor, but it’s just one part of all the factors converging. I think a lot was in alignment.”

Black is part of a regional interagency group on the issue that includes Berkeley, Oakland, and the East Bay Regional Park District. All of the jurisdictions are using informational campaigns to make the public aware of the need for preparation, both to minimize or prevent a major fire and to ensure people are ready with essentials if the need to evacuate arises.

“We’re communicating the message that it is possible here,” Black said. “We want to make this town survivable when the next firestorm happens.”

Each locality tailors its message to the area it serves. “It’s a cooperative effort or campaign. We have a different town than Berkeley or Oakland. Each has different needs,” Black said. “The message strategy is the same, but how we apply it is different in a smaller town.” The outreach and inspection is an added responsibility for the department, but an important one that can lessen potential tragedy. “It’s not outside our ability,” Black said.

At the same time, efforts in one jurisdiction could mean little if preparation is poor in a neighboring area. The 1991 Oakland firestorm burned down from the hills to the area around Broadway Terrace, not far from the Piedmont city limits. “Symbolically, we’re locked elbow-to-elbow that we need residents to take deliberate proactive steps to harden their homes,” Black said.

Managing the vegetation around the home is crucial, particularly this fire season that arrives after a strong season of rain that has encouraged new and tall growth of grass. The department is conducting its vegetation management and inspection program and has distributed a flier that notes parts of the city are in a state-designated very high fire hazard severity zone.” The flier includes links to resources at Get Ready Piedmont and CalFire.

Black said the public has so far been responsive. “We have gotten quite a few phone calls and I answered some emails this morning,” he said. But some, he said, seem to have an attitude that “My home’s fine, I don’t need to worry.” A home is only as safe as the one next to it and residents shouldn’t be upset if neighbors report potentially dangerous conditions. “We want to grab every Piedmonter and tell them this involves all of us,” Black said. “Don’t get mad if you’re reported. This is in all of our interest.”

The 24-member department has two people who are trained and do inspections as time allows, with additional training being done to have more on staff. “It’s primarily complaint-based, but also addressing problem areas” as they come to light, Black said. “We want the community to feel it’s not being imposed on them. We want to offer solutions.”

Outreach will continue in a variety of ways. “We’re putting together a couple of videos right now,” Black said. “Our strategic plan is to have a monthly way to deliver the message all through fire season.” An upcoming video will  look at examples of situations that need addressing around town and a couple of others are now in production for presentation over the summer. The department will also participate in an outing with the Walking Wednesdays senior group led by volunteer Dick Carter to talk about prevention tactics.

Black is a California native who attended high school in San Diego County, then moved to Marin, where he attended the College of Marin and Santa Rosa Junior College.

He started as a volunteer firefighter in Ross Valley and Nicasio in Marin County, then attended the fire academy in Santa Rosa, which led to his first job with the fire department at the Skywalker Ranch facility of filmmaker George Lucas. “It’s one of the few private fire departments in the state, but they do mutual aid,” he said.

“Then I got the call in ‘99 from Clovis (in Fresno County) where I worked for almost 20 years,” rising to battalion chief.

While working his way up the ranks in Clovis he had the opportunity to take professional development programs through the department and earned associate of science and bachelor’s degrees, then a master’s degree in public administration with an emphasis in fire and emergency services.

The decision to apply for the position in Piedmont came when he and his wife, Nimai, became “empty-nesters” after raising three sons at their Madera County home just outside Yosemite and realized that most of their friends and family were in the Bay Area.

“I was on the wildfire in Yosemite when I got the job here,” he recalled. “I didn’t know because there was no cell service.”

The close-knit community of the city and its government has been a plus.

Black looks forward to collaborating with other city departments to make Piedmont a safer place. “There’s a lot of talent in this city that can come up with creative ideas,” he said.