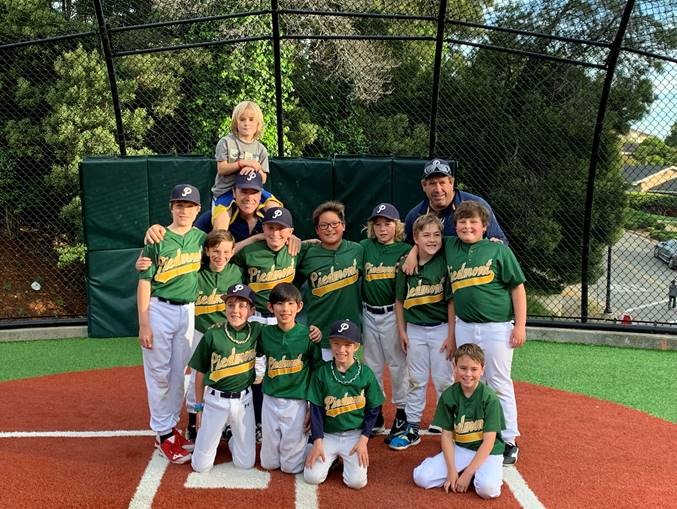 The Mustang Quakes beat the Thunder 3-2 in the 2019 championship game on May 22 at Hampton field. Despite both teams’ histories of scoring lots of runs, this game featured great pitching and defense in a low scoring affair.

Head coach Micah Myers chose pitcher Jackson Tarino to start for the Quakes. Tarino was a solid starter all season and Coach Myers was looking for him to silence the big bats featured in the Thunder lineup.  Tarino started the game off by striking out the Thunder’s lead-off hitter, one of five strike outs on the day.  Aiden Bell hit a soft liner, which was secured by the Quakes second baseman Floris Haan for the second out of the inning. The Thunder’s hard-hitting Matthew Medina got things going with a blast in the gap between left and center field. The Quakes’ Jake Giordano made a great play to hold Medina to a single. Tarino wasn’t flustered by the big blast, securing the final out of the inning on a comebacker with a nice throw to first.

Coach Steve Long turned to Matthew Medina to take the mound for the Thunder.  Medina started off throwing hard and striking out the Quakes lead-off hitter with three fastballs.  The Quakes’ Anthony Stensland had more luck when he managed a four-pitch walk. With a runner on first, the Quakes’ Asher Takazawa delivered the game’s biggest hit– a double to right center to score the games’ first run.  Takazawa’s big hit was followed by RBI singles by Floris Haan and Theo Barber. Medina gathered his composure and struck out two straight batters to close the inning.  The Quakes led 3-0.

Despite the two teams’ penchant for hitting, the second and third innings featured more great pitching by Tarino and Medina. The Quakes’ Tarino finished the day with three innings of scoreless pitching, striking out five batters and only allowing two hits and no walks.  The Thunder’s Medina allowed just the three runs, while striking out six batters and giving up four hits in 2 1/3 innings of work. Henry Stein replaced Medina on the mound for the Quakes, and he too delivered a solid outing.

The Quakes’ Stensland relieved Tarino in the top of the fourth.  The Thunder’s Josh Bell worked the count in a 7-pitch at bat to earn a walk.  Anson Co also managed a walk to put runners on first and second with no outs. But Stensland settled down to strike out the Thunder’s next two batters.  With two outs, the Thunder’s Aiden Bell worked the count for a walk to load the bases with Matthew Medina coming to the plate. Stensland made a nice pitch on 1-0 count, but Medina hit it hard for an infield single that drove in the Thunder’s first run. With the bases still loaded, Stensland remained calm and struck out the Thunder’s clean-up hitter with three straight strikes.  The game moved to the bottom of the fourth with the Quakes up 3-1.

In the bottom of the fourth, Henry Stein struck out two batters sandwiched around a single by the Quakes’ Jackson Tarino.  For the third out, second baseman Mateo Long fielded a grounder and made a clean throw to first baseman Max Fujimoto.

In the top of the fifth, the Thunder’s Mateo Long and George Saunders led off the inning with walks, and stole third and second.  The Thunder’s Charlie Harrison grounded out on a nice play by the Quakes’ third baseman, driving in Long for the Thunder’s second run of the game. After a couple more walks, the Quakes’ Stensland settled down to strike out two more batters and end the top of the fifth inning.  In the bottom of the fifth, Henry Stein continued his great pitching by getting the Quakes out in order.  Heading into the sixth and final inning, the Quakes held on to a narrow 3-2 lead.

With the game on the line, Coach Myers turned to Asher Takazawa to take the mound.  Takazawa struck out three straight batters to secure the win and the 2019 Mustang Championship.

Congratulations to both the Thunder and the Quakes.  The title game was well-played with lots of big moments and players who rose to meet the challenge.