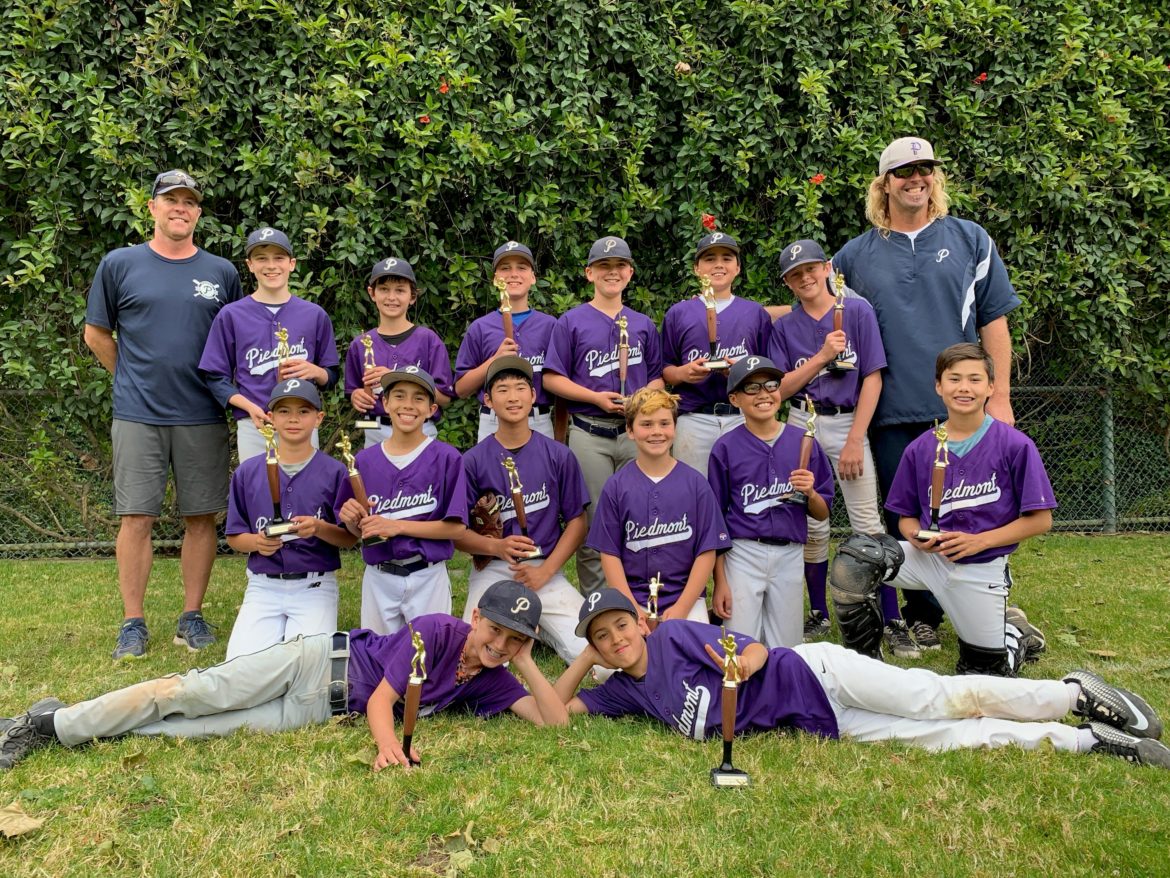 The Storm avenged an earlier defeat to the Raptors, winning two games, 8-6 and 11-3, to capture the Bronco title on June 2 at Coaches field.

Piedmont’s Bronco teams (players aged 11 and 12) play in a league with teams from Orinda and Moraga.  The season concludes with a double-elimination tournament.  This season, the top three seeds were from Piedmont—the Storm, Raptors, and Gators.  On May 28, the Raptors defeated the top-seeded Storm, 4-3, to advance directly to the championship game.  The Storm fought their way through the consolation bracket, beating the Moraga Giants 9-3 on June 1 behind a strong pitching performance by Owen Wagner to earn a rematch with the Raptors.  In the finals, the Raptors needed one win to claim the title. The Storm, by contrast, would have to beat the Raptors twice because of the double-elimination format.

For game one, Storm Head Coach Steve Thobe turned to Owen Blanford (your reporter) as the starting pitcher. Raptors’ Coach Jay Mendoza tagged Charlie Wright as the starter. In the top of the first, the Storm scored two runs to take the early lead. Lead-off hitter Chase Borjon started it off with a single, and Sam Shelby drove him in with a single to right field. Shelby later scored on a fielding error.

In the bottom of the 1st, the Raptors looked to answer back with their own runs. William Ferreira got things going by grinding out a walk in an 8-pitch at bat. The Raptors’ Charlie Wright and Adrian Mendoza followed with singles to close the score to 2-1. But the Storm defense came to the rescue, throwing out two runners at the plate to maintain a 2-1 lead.

In the top of the second inning, the Storm managed to score another run. Jordan Vo started it off with a 2-strike line-drive single into right field. Vo then stole both second and third. Cullen Baenen, the youngest player in Bronco, knocked Vo in with a single to right. The Raptors’ Charlie Wright limited the damage by striking out two straight batters.

When the Storm went back onto the field, they made some amazing plays. Kellen Thiel snagged a hard line-drive hit by Miguel Long. Blanford then struck out two Raptors to finish the second with the Storm up 3-1

In the top of the 3rd, the Storm expanded their lead with some great hitting.  Chase Borjon got things going with a two-out single. The Raptors’ starter, Charlie Wright, was replaced by Jackson Lommen.  Lommen was greeted with singles by Daniel Weiland, Sam Shelby and Owen Blanford, with Shelby and Blanford picking up RBIs.  Lommen settled down to limit the damage with a strikeout.

With his team up 6-1, Blanford continued his strong outing, striking out five of the next six Raptors hitters in the 3rd and 4th.

Despite loading the bases, the Storm were unable to score in the top of the 5th, as the Raptors played some great defense to support Jackson Lommen. The solid defense seemed to inspire the Raptors as they came to bat in the bottom of the 5th. William Ferreira got things going by singling to right on an 0-2 count.  Ferreira stole second, and an infield error allowed Charlie Wright to reach base safely.  With two on and no outs, Adrian Mendoza smashed a single to center field, scoring two. Max Jordan-Thobe replaced Blanford, and the Raptors continued to swing the bats with big hits by Jasper Schuetz and Timmy Kalamas to tie the score at 6-6.

In the top of the 6th, the Storm answered.  With one out, Jordan Alemania reached on a fielder’s choice, taking second base with some smart baserunning.  With two outs, Drake Prata-Baack delivered the hit of the game—a double to deep left field—that allowed Alemania to score easily. When the Raptors came up to bat, Jordan-Thobe pitched a 1-2-3 inning.

In the 7th, the Storm added an insurance run. Owen Wagner started the inning off with a single, and moved to third on two wild pitches. With one out, Lucas Ghielmetti hit a hard grounder to short that plated Wagner.  The Storm now had an 8-6 lead heading to the bottom of the 7th.

Jordan-Thobe started the inning off strong with a strikeout. He retired the next batter on a pop-up to second.  With the top of the Raptors’ order coming up to hit, Coach Thobe turned to Sam Shelby.  After a single to shallow center, Shelby secured the win on a flyball to center.

For game two, the Raptors started William Ferreira and the Storm started Jordan Alemania.  Ferreira led off for the visiting Raptors and reached first safely on a dropped third strike.  After stealing second and third, Ferreira scored the game’s first run on an infield out by Charlie Wright. In the bottom of the first, the Storm’s Sam Shelby got things going with a two out walk.  He moved to third on a single by Owen Blanford, and then scored the tying run on Jordan Alemania’s RBI single to right.  With one inning in the books, the game was tied 1-1.

Jordan Alemania pitched brilliantly for the next three innings, striking out 8 of the next 9 batters. In the bottom of the third, the Storm built a 6-1 lead with some great hitting.  The big blows were delivered by Jonathan Woo and Sam Shelby, who each hit doubles. As the game went to the fifth inning, the Storm had a 6-1 lead (the same lead they had squandered in game 1).

In the top of the fifth, Coach Thobe brought Sam Shelby in to pitch.  After two walks, the Raptors’ Adrian Mendoza hit a deep fly to center that drove in two runs.  The hit looked like a sure double, but the Storm’s Johnny Woo delivered the defensive play of the day.  Woo made a great relay from the fence to get Mendoza out at second. In the bottom of the fifth, the Raptors’ George Bishop pitched his second consecutive scoreless inning to keep the game close.  The teams headed to the 6th with the Storm up 6-3.

The Storm’s Sam Shelby started the inning with two strikeouts. After a single to right by Jasper Schuetz, second baseman Kai Wicke made a nice play on a grounder in the hole for the third out. Wicke then led off the bottom of the sixth with a single to center, igniting a big inning. The next seven Storm batters reached base safely, with each hitting the ball hard, including singles by Kellen Thiel, Johnny Woo, and Daniel Weiland.  In total, the Storm scored five runs to expand their lead to 11-3 heading into the final inning.

Sam Shelby came out to pitch the seventh with a chance to secure the championship, and delivered a three up-three-down, 11-pitch inning.

Congratulations to the Raptors and Storm on great seasons!