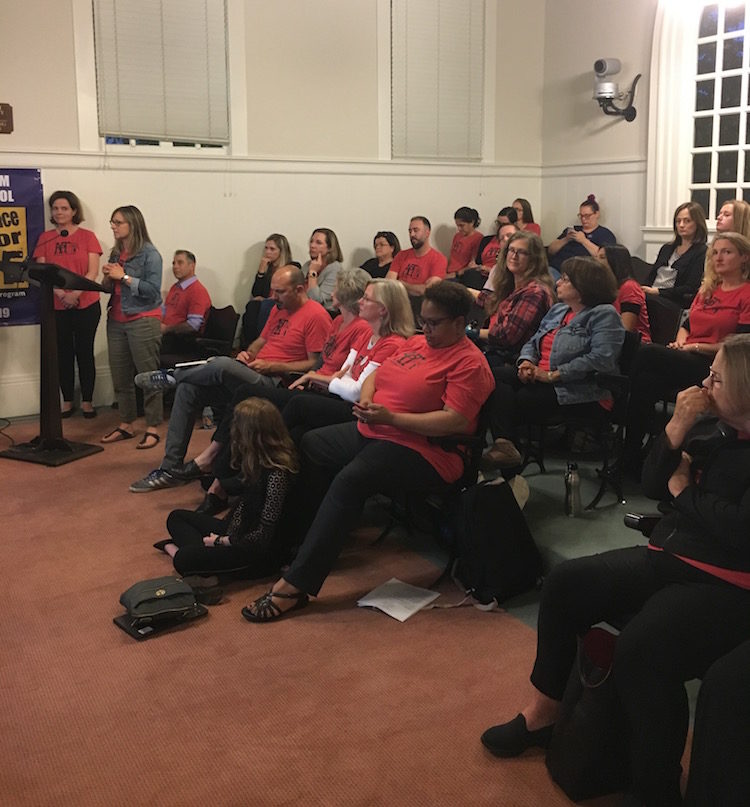 Red union T-shirts were in abundance as teachers made their case to the district Wednesday for a better salary offer.

Upcoming financial decisions are not going to be easy for the Piedmont Unified School District, nor will they be painless. The reasons for the hard choices were front and center at the school board meeting on Wednesday, as was one of the few rays of hope — two parcel tax measures being eyed for the November ballot. The importance of the parcel tax was apparent as the board heard from a large turnout of teachers who filled the meeting room and two overflow spaces to appeal for more pay as they struggle to make ends meet.

At the same time that teachers are seeking more than the 1 percent salary increase being offered, the district is projecting an enrollment and revenue shortfall that could result in eliminating some positions and easing requirements for students who want to transfer from other districts.

Teachers around the Bay Area are struggling

The district and its employees are being hit hard by the high cost of living in the Bay Area, which has sent expenses soaring even as enrollment declines in Piedmont and other districts in California.

The state and district budget situations were updated in presentations by Superintendent Randall Booker. The revised state budget proposed by Gov. Gavin Newsom only adds to the woes, offering scant education funding assistance even as California’s treasury is accumulating a massive $20 billion “rainy day” surplus, Booker said, calling it “very disappointing.” This has not turned into a windfall offering, only a cost of living allocation increase from 2.57 percent to 3.46 percent, an increase for the district of $189,000.

It was reported out of closed session that negotiations between the district and teachers made progress and that several tentative agreements have been reached, and the talks between the two sides did not appear to be adversarial at this point. Members of the Association of Piedmont Teachers wore red union shirts to the meeting and board members and Booker likewise wore red in solidarity with them.

Teachers nonetheless pressed the point that a pay increase limited to 1 percent would leave many members uncertain about continuing to work in the district as costs of living climb by a much greater amount. “We cannot accept 1 percent compensation and we cannot accept the creation of new positions while other positions are under threat of cuts,” APT President Gabe Kessler told the board.

Teachers have had some modest increases in recent years, but have also accepted years with pay reductions, furlough days and shouldering a portion of the cost of health care, which continues to rise sharply. Many are also being priced out of living accomodations, the board was told, with some working extra jobs in off-hours or living with roommates and still paying a high piece of earnings for rent. “We are going to start losing teachers,” one teacher said.

The teachers made the same call that Booker did later in his update on the state budget, saying that change in education funding needs to be made in Sacramento.

The pleas by teachers come as the district is struggling to balance its budget at a time of declining enrollment that severely reduces funding from the state and places more pressure on local funding. The district “may not meet the 3 percent reserve in the current fiscal year if an additional reduction of $45,000 is not identified,” according to the superintendent’s interim budget report. Additionally, budget reductions for the next two academic years, 2019-20 and 2020-21, “will need to be substantially more” due to reduced revenue projections and obligations to employee retirement systems.

Based on current state allocations and district obligations, the structural deficit would increase to $1.8 million, leaving the district with a negative fund balance of $618,000, and “the gap between projected reserves and required reserves would grow to $1.9 million” for 2019-20, according to the staff report.

Staff reductions being discussed to meet the immediate shortfall include eliminating the assistant principal position at Havens Elementary, the part-time elementary level tech teacher position, and elementary instruction aides, as well as some contracted workers.

Interdistrict transfers considered as a way to offset declining enrollment

Aside from ballot measures, a key factor in shoring up the budget is reversing a decline in enrollment that the district projects as a loss of about 50 students in 2019-20 and 93 students by 2020-21.

Piedmont is not alone in this trend, Booker said, as districts around the Bay Area are seeing a drop in enrollment. The decline is attributed largely to families leaving California or enrolling their children in charter schools. Declining birth rates across the state are also playing a role, according to research by Children Now and reported by EdSource.

As a result, the district is looking at easing requirements for its interdistrict transfer policy to allow more students to enroll at the grade levels, primarily kindergarten and sixth grade, with the most openings. “Each kindergarten student generates approximately $8,500 per year in revenue from the state,” according to the staff report, leaving the district with a possible loss of $230,000 to the general fund if kindergarten enrollment doesn’t reach the projected 150 students.

Booker called the proposed revisions “a way to bolster our enrollment in a controlled way.”

The interdistrict transfer policy being discussed includes a revised list of priority levels for those seeking to enroll, with the most notable change being to allow the entry of grandchildren of residents in the district.

The challenge in allowing the grandparent priority for transfer is around getting sufficient proof that all requirements are met, Booker said, adding that the policy may have to be revised in the future if there are problems.

Transfers would be allowed based on the priority list and the space available, with the superintendent’s office retaining the final say. Transfer requests that are denied can be appealed to the county office of education.

“We’ve talked about this for years and years and I feel like we should give the community more time to weigh in,” said Board member Sarah Pearson.

“We are in a crisis situation in terms of how low our enrollment is,” said Board member Cory Smegal, adding that the district would not even be discussing changes to the policy otherwise.

Concern was expressed that taking too long to finalize the transfer policy would limit potential enrollment for the next academic year.

In response to an audience question about applications from outside the district, Booker said the district doesn’t have many, “but we get a ton of inquiries. There’s a lot of interest.”

The transfer policy will come back before the board at its June 12 meeting, when the community can offer its opinions.

The board also discussed the parcel tax measures proposed for the November ballot. The district is considering two measures, an eight-year renewal of the current flat rate parcel tax and a second measure that would assess properties at an additional 25 cents per square foot of a building.

A survey conducted for the district showed that respondents preferred the square-footage tax as more equitable, but also showed that those asked about renewing the current tax were strongly in support. The current tax, which assesses the city’s 3,921 taxable parcels at $2,656 per parcel (plus a 2 percent annual increase) brings in $10.5 million in revenue, or close to 30 percent of the district’s general fund. The second measure would realize an additional $2.5 million.

Resident Rick Schiller, citing voter preference in the survey for the square-footage option, suggested that the district put a single measure on the ballot assessing $1.15 per square foot as something the community would support. But board members responded that having two measures seemed like a safer option. Booker also pointed out that a single measure at that rate would only realize $1 million for the district. The district is under a deadline to submit its ballot proposal to the county and the board will consider the ballot measures at its June 12 meeting.

(Editor’s note: School Board agendas are posted on the PUSD website at least 72 hours before the start of a scheduled Board Meeting. Background material from the May 22 school board meeting can be viewed here. )