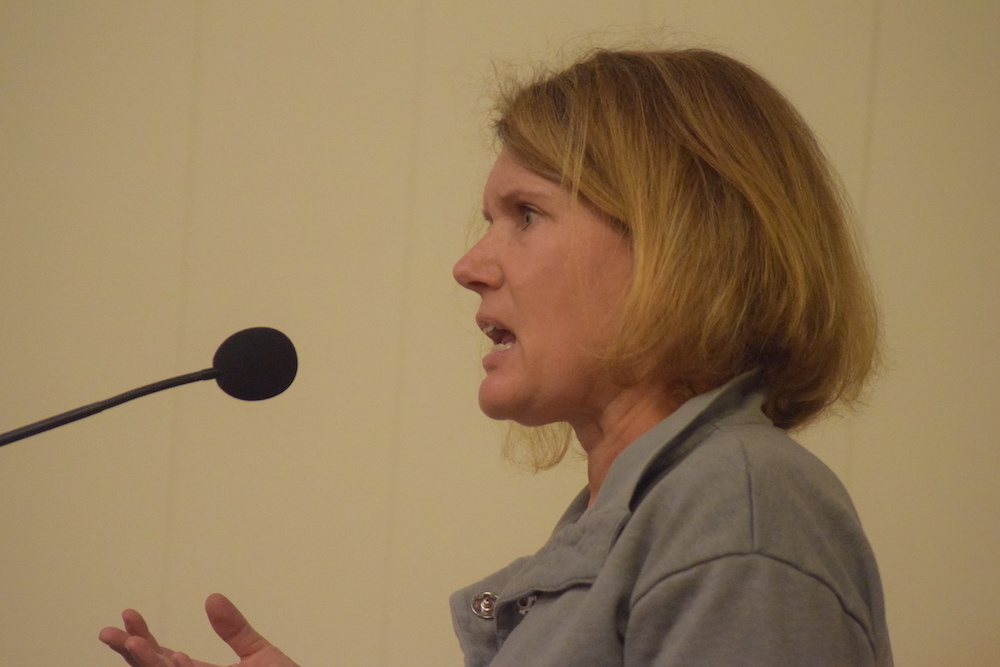 Mary Wells, resident of the Magnolia Avenue neighborhood, thanks City Council for involving neighbors in the discussions.

What once appeared to be the loss of as many as 45 mature street trees as part of the upcoming Magnolia Avenue paving project now may claim as few as 18 trees.

And a process that had at first drawn criticism from residents in that neighborhood for its haste and lack of transparency has now prompted some of those residents to praise the city for not only listening to their complaints, but responding in a constructive way.

This came after about 45 people joined city officials on a May 18 “tree walk” for an up-close-and-personal look at the trees in question, and an apparent reassessment of some of them.

“I think the city came a long way with involving the public in the process” in selecting trees to remove, and to spare, said Mary Wells, who lives about a block off of Magnolia.  She said she favors removing fewer trees along Magnolia at more deliberate intervals than first proposed, “so it doesn’t look like a clear cut.”

People weren’t so kind when, on May 6, the City Council voted to spend about $2 million to repave and otherwise improve three sections of streets this summer, including a stretch of Magnolia Avenue. The council heard from several people who felt blindsided by the news about the tree removal, and that the public wasn’t part of that decision. Several council members agreed.

The council’s motion to approve the paving project was accompanied by a “friendly amendment” by Councilwoman Betsy Smegal Andersen to include a pledge to work with Magnolia residents on ways to save as many trees as possible. City Public Works Director Chester Nakahara proposed the tree walk along Magnolia to talk about each of the 47 trees identified for prospective removal. That meeting took place May 18.

At this point, following the “tree walk,” 18 trees are now slated for removal as part of the construction work and repaving of Magnolia Avenue, Nakahara said Friday in an email.

Of the other 47, two have already been removed, Nakahara said — one for safety reasons and one as part of a previously approved  remodeling project.

The other 27 trees will be placed on a “watch list,” Nakahara said, to be carefully monitored into the future. There is no schedule to remove these 27 trees, he added, and their futures will be determined on a case-by-case basis over time.

One thing that hasn’t changed, Nakahara said, is that if any street tree is deemed a safety hazard by an arborist, or found to be unhealthy to the extent of being a likely hazard, it is taken out immediately.

The council on May 6 also pledged to be more open to replacing the liquidambars with species other than the Chinese pistache trees first proposed. Wells was happy to hear that, and said that red maples and horse chestnuts could both provide better canopy and shade than would the pistache trees.

Wells and other neighborhood residents acknowledge some of the trees are unhealthy, and present a safety hazard until they’re removed. Other trees thus far marked for removal, she said, should be reconsidered, including a couple of large liquidambars near the corner of Magnolia and San Carlos Avenues.

The city’s responsiveness on the Magnolia trees issue prompted one Magnolia Avenue resident, Christian Charnaux, to hand the council a letter this past Monday night, that he, Wells and four other residents signed. It praises the City Council and staff for revisiting the tree issue, and for the “tree walk” itself.

It also asks that the city go through a “formal process” for the final evaluation of the remaining 18 trees and any new trees being considered for removal in the future. The letter calls for a draft revised tree removal plan explaining any changes in decisions about individual trees; alerts to the community that said draft has been issued; provide 14 days for public review and comment on the draft plan; post the final revised plan on the city website and share it with local media; and give at least 14 days after publication of the revised final plan before any tree removals on Magnolia Avenue can begin.

Nakahara said Friday that the city has not yet had to review these proposals.

Smegal Andersen said she is happy city staff met with residents and give additional consideration to removing so many trees at one time.

“I am confident that City staff will work thoughtfully with our residents to balance the long-term health and beauty of our urban forest with the safety and accessibility of pedestrians.”

Nakahara said the process leading to greater scrutiny on these trees is a good, if imperfect, example of city responsiveness.

“In retrospect, I understand that it would have been best for all concerned if these conversations had been initiated months ago,” he said. “The bright side is that they happened, and that we learned from the experience to engage with the community early and often.”