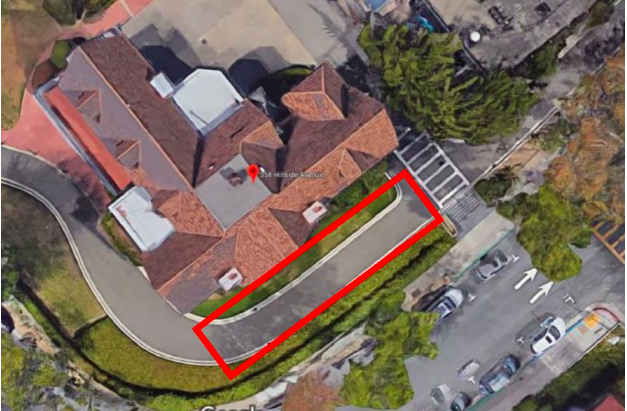 Proposed location for a mini "skate spot" next to the recreation department building.

After months of study, Piedmont Recreation Department commissioners voted on Wednesday to move two skate park proposals on to the City Council for further consideration. The first proposal, to create a mini “skate spot” on a part of unused driveway next to the Recreation Department building on Magnolia Avenue, passed out of the Commission by a vote of 6 to 1; the second proposal, to explore design changes to the existing layout of Kennelly Skate Park to make it more attractive to beginner and intermediate skaters, passed unanimously.

According to Recreation Department Director Sara Lillevand, the Department has received numerous comments from the public over the years about the poor functionality and deteriorating condition of Kennelly Skate Park, which first opened in 2001, as well as the lack of skate-friendly areas in the city. In addition, the recently approved Beach Field Master Plan excluded any skate-friendly features from its design, to the dismay of many youth skaters and their families. “We are trying to figure out how to address the needs of skate community,” said Lillevand.

In their research, which included visits to other East Bay skate parks and an online survey completed by 42 people, the committee found numerous problems affecting Kennelly Skate Park usage, including: difficult access and skate park features not suited to the level of skaters using the park, limited hours, cracking concrete, lack of a water fountain, and no shade or spectator area, which limited its use for recreation programs or as a gathering spot for families. The committee recommended exploring a redesign of the park, adding a meeting area with shade, opening the park without a monitor (Piedmont is the only city in the area that has a park monitor on site), adding pedestrian access below the baseball diamond at Coaches Field, and adding a water fountain.

Commissioner Burge noted that the skate park site above Coaches Field has expansive views of the bay and that improving parts of the skate park area could make it an attractive gathering spot for more people and possibly open up opportunities to rent the space.

The committee also recommended creating a mini skate park with two to three skate-friendly features (such as a rail, a short ramp, or a box) in the long driveway on the west and south sides of the recreation department building. “The location is screened from residences by the PRD building itself and is well located for use by youth ages 12-18 due to its proximity to PHS and PMS,” according to the report. “There is no downside to using this space now for a demonstrated need that we’ve been hearing about for a couple of years. It doesn’t preclude any other uses in the future. In the meantime, I think it’s a great use of the space,” said Lillevand.

Commissioner Dick Carter, the only “no” vote on the mini skate spot proposal, said he was not convinced that was the best use of the area, “I’m not there yet on the need for a skate spot and not sure the expenditure is worth it given other priorities” he said, “I don’t see a lot of kids with skateboards” in town. Carter suggested the area could be used for exercise equipment instead.

Jaden Cook, a skate park monitor at Kennelly, explained that the reason there aren’t more skateboarders in town is because there is no place to skate other than the hard-to-find Kennelly or the lower playground at Beach or the blacktop at Havens. “We do frequent other skate parks. Kennelly is outdated. It’s not beginner-friendly. The big problem is the flow. Kids want to try skateboarding, but there’s just not a good place to do so.”