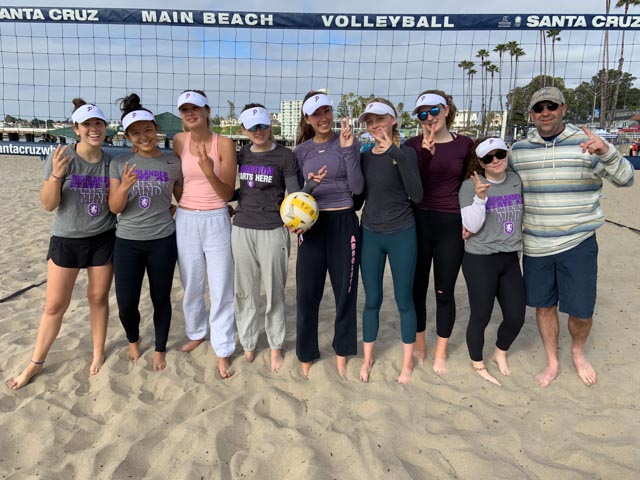 Formed as a PHS club, the Highlander team is comprised of 14 girls competing against other Northern California high schools around the Bay in the NorCal Beach Volleyball League under the auspices of the Amateur Athletic Union. The new league has been formed with over 32 other Northern California high schools to build and support the Beach Volleyball sport.

After establishing the club, the two players went on to recruit additional student-athletes, and local Piedmonter Dale Turner as Head Coach.

The focus of the club is primarily on basic beach volleyball skills, individual improvement and fostering the sport overall. Although some of the founding members of the club have beach experience, many of the competing girls do not.

“I love this sport because it’s fun and highly competitive at the same time,” said Jace Porter, Co-President of the PHS Beach Volleyball Club. “I was very pleased to see us expand our team roster this year with some strong younger players to help build a future championship team in the seasons to come.”

The Northern California High School Beach Volleyball League was formed three years ago, thanks to significant local demand and guidance from the Southern California League, against which the top NorCal teams compete for the State Title each year.

“In 2017, we started with just four schools to keep the League small to work out the kinks and build a solid foundation. The following year we grew to 16 schools, and this year we grew to 32 schools” said Barry Peters, co-commissioner of the League. The growth has been so admired by the SoCal League that this year two NorCal schools have been invited to State Finals on May 11th in Santa Monica, up from one school for the past two years. SoCal has also requested the NorCal League to host the 2020 State Finals.

Season Results: After competing in multiple duals on Alameda Beach with East Bay High School teams such as St. Joseph, Bishop O’Dowd, Acalanes, Campolindo and Alameda, the season culminated in the NorCal Championship Tournament on Santa Cruz’s Main Beach last Sunday with over 71 teams representing the top 20 schools throughout the region.

Going in as the 14th seed in Northern California overall, Piedmont won its first two duals to advance in the bracket, finally succumbing to Sacred Heart and Aragon High School mid-day.

Looking for More Players: Girls interested in joining the team for the 2020 Spring season are invited to contact Jace Porter on the Piedmont High campus or Alison West at the AD office for more information.