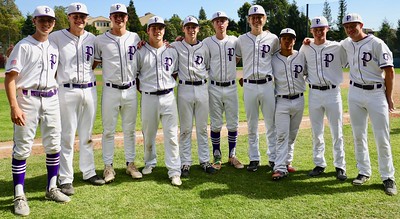 The Highlanders beat Hayward 8-0 in a West Alameda County Conference (WACC) – Shoreline Division semi-final game on May 7. The victory came on senior night for the team. The Highlanders play next for the WACC-Shoreline championship against rival Encinal on May 9 at 3:30PM at Laney College.

Ben Levinson pitched a very efficient complete game, notching his 5th victory of the year. He allowed only 3 hits and struck out 7 batters.  He needed only 77 pitches – 73% of which were strikes – in the complete game effort.  The Piedmont defense supported Levinson’s pitching with only 1 error in the game. Catcher Cal Barna pulled off a dramatic double play by catching a pop-up bunt and then doubling a Hayward runner off second base.

The offense put together a two-out rally for a 6-run second inning.  They added one run each in the 4th and 6th innings.

In the 2nd, senior Lucas Derr got things started with a single, and then stole second base.  He scored when senior Jonah Sanders singled to right field.  Barna singled to left and Senior Trent Settlemier was hit by pitch to load the bases, bringing senior Owen Levinson to the plate. Levinson sharply singled to left, scoring Sanders and Barna.  Settlemier and Levinson pulled off a double steal, and senior Joe Sassi singled up the middle, scoring Settlemier.  Sassi then stole second, and advanced to third as Levinson scored on a wild pitch.  Kyle Spanier singled to bring in Sassi, and Piedmont led 6-0.

The Highlanders added a run in the 4th when Owen Levinson singled, Sassi was hit by a pitch, and Spanier hit another single, this time bringing in Levinson.  Piedmont led 7-0.

In the Highlander 6th, senior Aidan Dixon blasted a double down the left field line. Dixon scored when Spanier hit one high off the wall in left field for a double to drive in the final run of the game.

Coach Eric Olson said that “It was exciting to see the team get a decisive, clean win on Senior Day.  We had seniors fill the entire infield and outfield today.  This group of seniors has brought so much to the program, and we hopefully have more to go!  And Ben Levinson hurled an absolute gem today.  I can’t wait for our next game!”