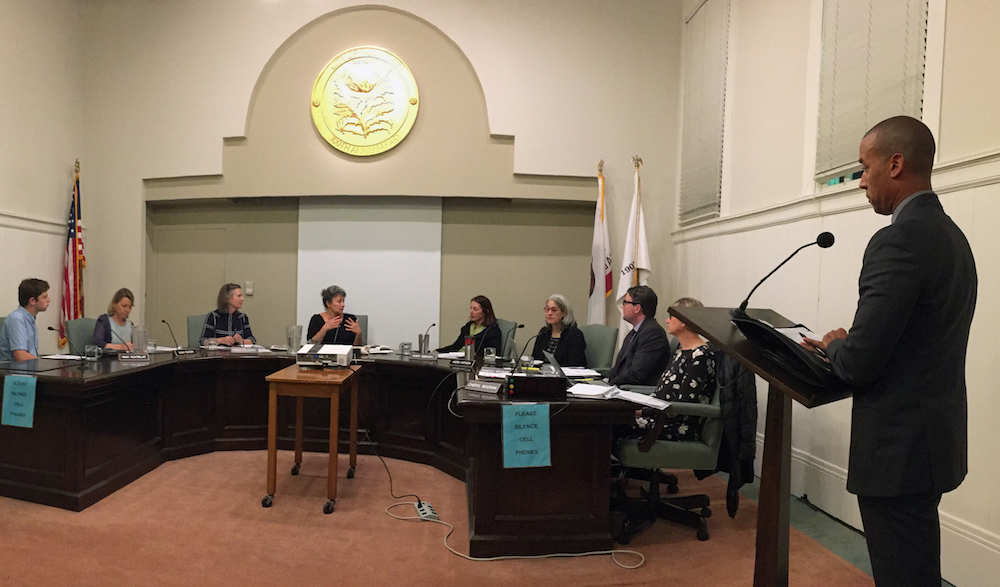 Police Chief Jeremy Bowers answers questions about the California Department of Justice Tobacco Grant Program award at the May 8 school board meeting.

The school district’s latest plan for accepting a $390,000 tobacco cessation grant generated no objections or controversy at the PUSD board meeting Wednesday night, winning unanimous approval.

That was a decided change from the two versions that came before it.

The grant has been in discussion since February, when a plan for a school resource officer whose beat would be the district’s middle and high school campuses generated stiff resistance from students, parents and some board members concerned about having an uniformed and armed officer at schools, particularly what it would mean to students already feeling marginalized.

A modified proposal discussed by the board in March would have had a schools-focused officer based off-campus and coming to sites on an as-needed basis or to conduct workshops and classroom seminars. That proposal fared little better, with many parents maintaining that counselors and mental health professionals were a better way to address student needs.

The newest version formulated between the district and Police Chief Jeremy Bowers goes farther in addressing those concerns.

“In partnering with Chief Bowers we made some significant changes to the proposal,” schools Superintendent Randall Booker said in his presentation to the board. Most significant, he said, is “using a good portion of the grant money to hire and train a juvenile-trained officer to work with youth across the community.”

According to the staff report, “This specially trained officer (Juvenile Officer) will partner with PUSD to collaboratively conduct student and parent education classes on the harms of tobacco use and develop a Diversion Program for youth who are detected using tobacco products.”

The officer would also work with the district on strategies to address and prevent tobacco use and vaping. Both have a higher rate of use by students in the PUSD than in other area districts, according to the Healthy Kids Survey.

The officer would be based off-campus, but available as needed, and “can push out into the community as well,” Booker said. Having a dedicated officer also means improved communication and interaction between the district and police as a “single point of contact” on possible issues.

Perhaps just as significant to the community is that the revised program calls for using $100,000 of the DOJ money to contract for a health education consultant and a restorative justice/diversion program consultant, as well as a stipend for a mental health counselor/therapist during the first year of the grant.

Booker said that because the district is “trying to get the biggest bang for our buck,” the consultants would not be focused on one-on-one situations, but would provide training and ongoing consultation for district faculty, administration and staff, and education presentations for students and the community. The cost of these services is still to be determined.

The program sets out goals for the next two years, with the first year including a review and new alignment of the district’s health curriculum. Which Booker said is “an opportunity to tackle issues in a new way,” including reaching students at a younger age, when attitudes about using substances are being formed.

The second year of the grant would use the revised curriculum, staff training and diversion programs to work toward goals of reducing not only tobacco and e-cigarette use, but student perceptions about the hazards they present.

The district will partner with the Piedmont High School Wellness Center, along with counselors and teachers to sustain the goals of the program, rather than letting it subside when the grant funds are expended, Booker said.

Board member Cory Smegal said she doesn’t know if it is realistic, but hopes that a diversion program could start in the next academic year. “Do we understand why our kids are vaping at such a higher rate compared to other districts?” she asked.

Board member Megan Pillsbury expressed her gratitude to Booker and Bowers for working out an acceptable compromise, saying it “underscores the need for process in achieving something we all wanted.”

Board member Sarah Pearson noted that in the survey many students said obtaining marijuana, alcohol and e-cigarettes was not difficult. She expressed the hope that students themselves could help lead the program “so it’s not a top-down kind of thing.”

After the meeting Booker acknowledged that it remains to be seen whether the program can achieve all its goals, but that the grant funding is a good start.

“It is ambitious,” he said. “I think we have to do the best we can with the resources provided (that) we didn’t have to begin with to embark on this work.”