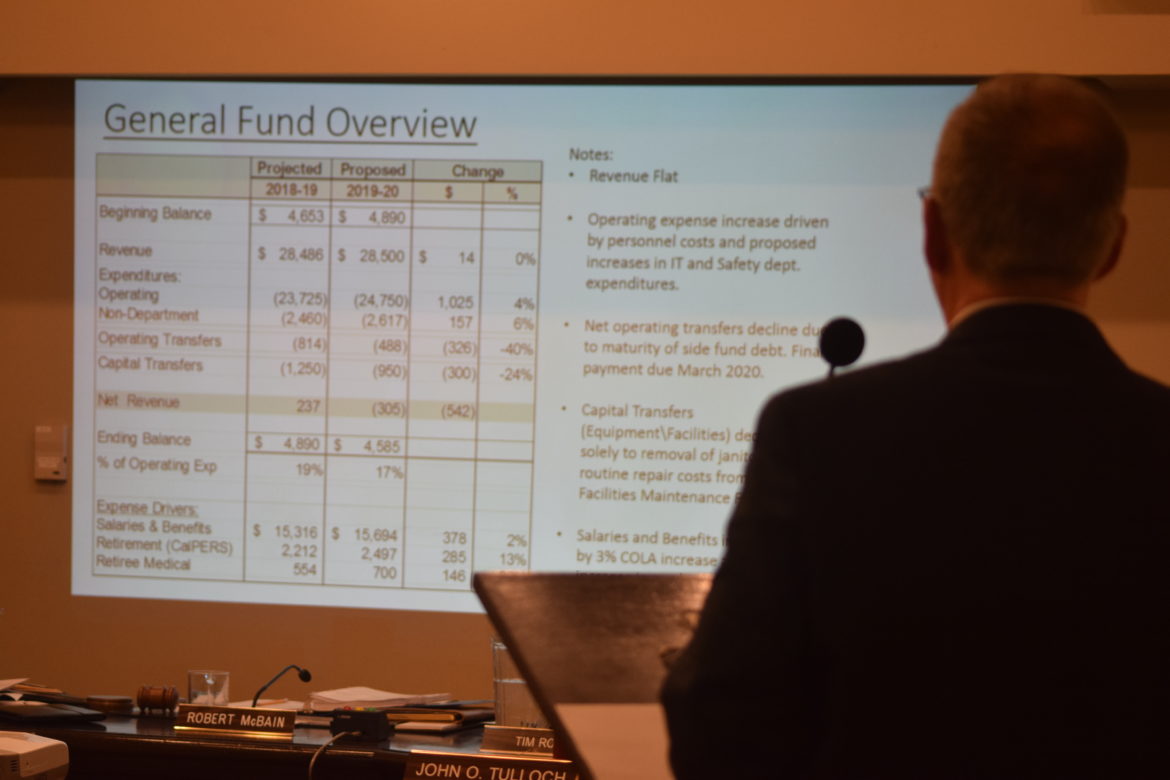 Significant financial issues in the city’s future, Benoit said, include $25 million in CalPERS pension unfunded liability, extensive sidewalk repairs and major work for almost every city-owned building or facility, including the community pool.

“Most of our facilities are in need of significant need of repairs or renovations.”

Given that almost all of Piedmont’s taxable parcels are residential, the health of the housing market, and property tax valuation, are key to the stability of city revenues. In a budget-related staff report, city officials acknowledge there is no assurance this upward trend will continue as the current economic expansion enters its 10th year.

Piedmont’s reliance on property taxes is both a blessing and a curse, City Administrator Paul Benoit told the council. It’s a positive, he said, because it makes for a stable income situation, as cities that depend more on sales tax income see greater fluctuations. The down side of that, he said, is that there’s little opportunity for growth with property taxes, especially in a mostly residential city.

Other anticipated sources of revenue informing the city’s 2019-2020 budget include:

Even with an anticipated net General Fund loss of about $304,000 for 2019-2020 — after General Fund money was transferred to both the Facilities Maintenance Fund ($550,000) and the Equipment Replacement Fund ($400,000) — Piedmont’s General Fund balance will still be about $4.6 million — the aforementioned 17 percent reserve.

As is the case in most California cities, Piedmont’s pension costs and retiree medical costs keep rising faster than revenue. Despite the various measures taken beginning in 2013 to contain these costs, including elimination of employer-paid member pension contributions, employee cost-sharing of pension costs, and the restructuring of post-retirement health insurance benefits, thos unfunded liabilities will remain a long-term concern..

The city has budgeted pension and retiree medical expenses at $3.2 million compared to the FY 2018-19 projection of $2.8, an increase of 14 percent.

Mayor Robert McBain said Monday night that the city has done a good job with its finances, given the needs and obstacles. A contract accounting firm earlier in the meeting said Piedmont’s finances were given a “clean audit” for 2018-2019.

“We’ve done a very good job to stabilize the current situation, but we’ve got some daunting challenges.”

Monday’s budget hearing was the first of two, with the second set for the June 3 City Council meeting. Two council budget workshops were held earlier. No formal action was taken this week. The council is expected to formally adopt the 2019-2020 city budget after that hearing..