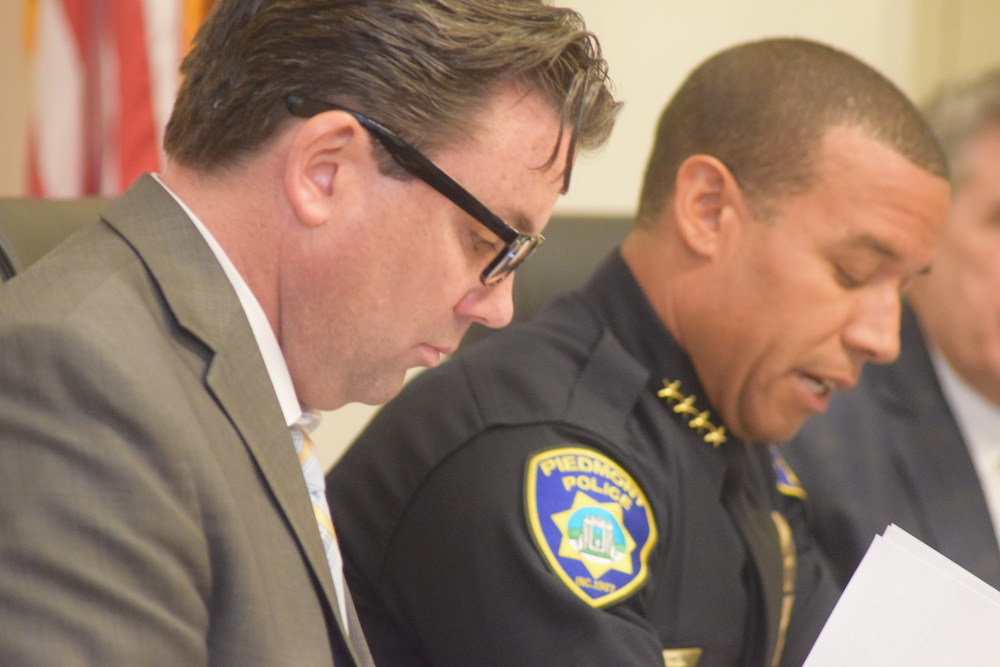 In an anticlimactic act after months of impassioned discussion over whether Piedmont should establish a school resource officer position, the City Council voted unanimously Monday night to formally accept a $391,599 state grant to pay for an officer for two years.

But Piedmont won’t use this  California Department of Justice Tobacco Grant money to hire a school resource officer, but rather a “juvenile officer” whose mission will be more narrowly focused on helping fight tobacco use, drug use and vaping by local school students.

“I really appreciate the ability to pivot and move in a different direction,” said Councilwoman Jen Cavanaugh.

Piedmont city and schools officials, along with members of the public, had been talking since February about the grant, and what they and local residents want that money to pay for. Initial talks centered around hiring a school resource officer, likely stationed at Piedmont High School, whose beat would have been the district’s middle and high school campuses.

Police departments in many East Bay cities have such officers to help prevent crime that starts with students and otherwise serve as a police presence on campuses.

But the school resource officer idea received pushback in Piedmont, where some students, parents and school officials said a uniformed, armed officer at schools could be viewed as threatening. Such an officer on campus could increase concerns about criminalization of school disciplinary issues and over possible targeting of minority students, and the lack of a “health educator” component associated with the anti-smoking mission.

A modified proposal discussed by the Piedmont Unified School District board in March, for a schools-focused officer based off-campus, was also not popular with much of the community and rejected.

The school district board on May 8 approved the use of some funds for health education and the concept for a “juvenile officer,” not be based on a school campus, whose mission would be more specific to keeping kids from using tobacco, drugs and alcohol. One part of that officer’s mission would be to create a diversion program for young people found to be using tobacco products, to divert them from suspensions or other punishments into educational programs about the effects of harmful substances.

Two people representing the Piedmont Appreciating Diversity Committee, which has contended a school resource officer could be viewed as threatening by students of color, thanked the City Council, Piedmont police Chief Jeremy Bowers and schools Superintendent Randall Booker for listening to community concerns and modifying the sort of officer the grant will pay for.

The goal, Bowers said Monday, is to have the juvenile officer in place for the start of the 2019-2020 school year. Getting that officer the needed training, he said, will take up a considerable portion of that officer’s time the first year. Bowers also said he hopes a backup juvenile officer will also receive some such training, as well.

When asked how many Piedmont students are punished each year for tobacco, alcohol or drug violations, he said from “somewhere in the teens down to the low single-digits.” The move away from suspensions and toward warnings and other measures has already started, he said.

Gary Fanger, the father of one PHS graduate and one current PHS student, told the City Council Monday his kids have told him vaping, especially, is common at the high school,  Help is needed, he said, to reverse that, but he believes suspensions will continue to have their place.

“Hopefully that would send a message to the rest of the students,” Fanger said.

And he said he also hopes the juvenile officer’s programs can counter findings of the 2018 California Healthy Kids Survey. That survey found that in Piedmont, 38 percent of high school seniors report binge drinking, while 24 percent report having come to school drunk or high, and 24 percent vape.

“We want to see some dramatic shifts in the Healthy Kids survey,” said Booker, who added he hopes the work the juvenile officer does will help “move the needle.”

Council members Monday night praised the final product of all the public meetings where it was ultimately hammered out.

“It definitely took some time to get this right,” Councilman Tim Rood said.