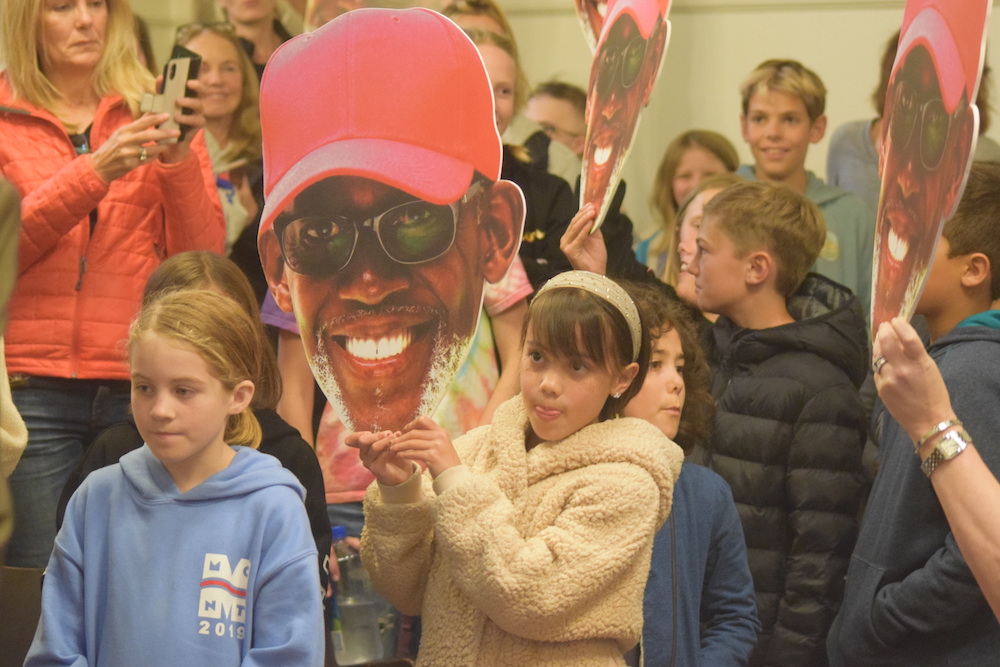 Arthur Ward had his presentation written up and ready to give to the Piedmont City Council Monday night — his perspective on traffic safety in the city. After all, he knew the subject well — at least as it applied to the corner of Linda and Lake Avenues, where he’s worked as a school crossing guard for the past nine years.

But the traffic safety perspective was a ruse, and it was Ward on the receiving end of a presentation Monday night — a spirited and heartfelt display of love and respect for a beloved school personality from family, friends, school kids and city officials.

“This was the happiest surprise I’ve ever had,” Ward told the council gathering Monday night, in between dabbing his eyes with a hankie.

Ward, 79, was honored twice this week — first at the raucous session at Monday’s City Council meeting, and again Tuesday at an equally enthusiastic gathering at the intersection of Linda and Lake Avenues near Beach Elementary School, which has now been officially named “Arthur Ward’s Corner,” as unanimously declared Monday night the the City Council.

The council chamber was packed to the gills Monday night with those who love Ward and his wife of 54 years, Summer.

“I’m glad our fire marshal isn’t watching,” said Vice Mayor Teddy Gray King, whose kids have attended Beach Elementary and who is well familiar with Ward. “There is no more loved and respected man in Piedmont than Arthur Ward,” King said.

The reactions of those in Monday’s council audience — including at least 30 school-age kids — backed that up, with applause, cheers and tears, Some held up cardboard blowup images of Ward’s smiling face,

Mayor Robert McBain said he couldn’t recall a more heartwarming moment in the Piedmont City Council chamber. “If you judge someone by the company they keep, well …” McBain said as he motioned his arms to acknowledge Ward’s adoring family and friends.

It was a similar scene Tuesday afternoon at Linda and Lake Avenues, during a “special assembly” outside Beach Elementary, but with a lot more kids. Lake Avenue was literally paved with kids holding up signs and cheering loudly for the man who helps them safely across the two streets each school morning and afternoon. Arthur even led the kids in chants.

“You kids are my number-one concern,”  Arthur Ward told the assembled group. “Many mornings I get up sore … extremely sore. But the Lord put me here for a reason.”

Arthur, who has lived in Oakland for almost 60 years, found himself assigned by the company he worked for to a crossing guard detail in Piedmont, where to that point he’d never been. Arthur’s wife Summer said Monday night that she wasn’t sure Piedmont would offer a positive experience for her and Arthur. That notion, she said, was soon dispelled.

“I can’t believe how wonderful this community has been for (Arthur),” Summer said. “They’ve given him new life.”

A Marine Corps veteran, Arthur later worked at the Oakland Naval Supply Center, first as a laborer and later as supervisor of computer services before becoming a school crossing guard. His son Artie, who came from Virginia for his father’s tributes, said he knew his dad would be a good crossing guard.

“I always looked at him as ‘Good Guy Arthur,'” his son said Monday night. “My father always respected people as they are.” And Piedmonters have respected Arthur right back.

“Arthur Ward exemplifies values we can all believe in, kindness and care for everyone. He keeps our students safe when they arrive to, and leave, school and does so in a way that makes him a great role model for our students,” said Michael Corritone, Beach Elementary’s principal. “Mr. Ward has a genuine love for our students, as they do for him as well.”

Added Deborah Dinerman, a former Beach parent and neighbor, “Every day, with just a dignified doff of his cap and a wave of his hand, his signature salutation inspires everyone to be kind, inclusive and respectful. In today’s world Arthur sets a very high standard for both children and adults on how to conduct yourself in public.”

Ward’s presence stays with the kids, at least some of them, long after he is no longer escorting them across the street.”I have known Arthur since the third grade; he is one the kindest, most considerate people I have ever known,” said former Beach student Oliver Maxwell, now a freshman at Piedmont High. “He serves as a role model for all of us.”

The Wards’ involvement at Beach school (“They come as a team,” King said Tuesday) has gone beyond the crosswalks. Arthur played the sax at a school Battle of the Bands event, and took part in a “Beach Review” performance there, too. “He’s like a surrogate grandfather for all the kids,” parent Sarah Borman said Tuesday.

Part of the reason Ward was honored now is that he says he expects to finally retire within the coming year, sometime around his 80th birthday.

So aside from sore muscles, what does Arthur say he’s gotten from his days at the crosswalk? The satisfaction of helping kids, off all ages, get through the day safely, and maybe a little more sanely.

“I wanted to treat everyone the way I wanted to be treated,” Arthur said. “The grownups, and everyone, has worries, and if I can make their day better as they’re going to work, that’s my main goal.”