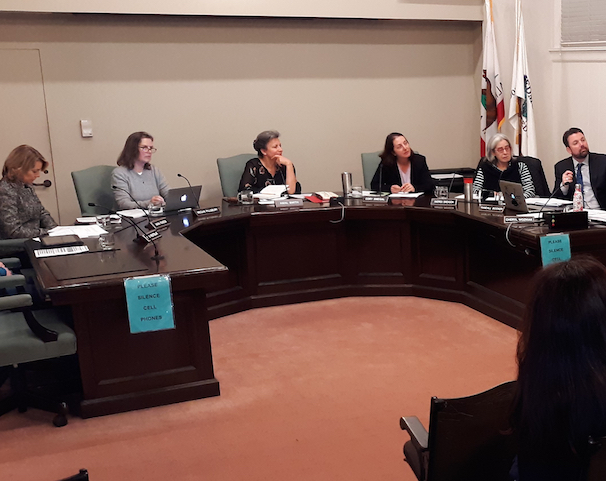 School Board (from earlier meeting in January; L.Ryan)

The results of a new survey assessing public support of a renewed schools parcel tax measure are hardly surprising. Even after 30 years, the community remains strongly in favor of parcel tax funding its school system, even among households with no children, and even with the prospect of an increased rate.

But even so, there are some nuances that could determine whether a measure is successful with voters, Tim McLarney, president of True North Research, told the Piedmont Unified School District board in an informational presentation on Wednesday.

At the direction of the School Board, True North, which McLarney co-founded in 2002, conducted a survey March 6-13 of 305 voters deemed likely to participate in the November 2020 election.

The average interview was 18 minutes long and covered funding priorities for the district, potential arguments in favor and against a measure, and asked respondents about the importance of maintaining the quality of local education against other community needs, as well as their priorities for school spending.

The quality of schools topped the list of significant community issues, with 93 percent rating it extremely or very important. The next most important issues were maintaining streets and sidewalks at 73 percent, and maintaining local property values at 72 percent.

The polling sample was split into to groups, one asked about continuing the flat rate tax approved by voters under Measure A in 2013, the other about a proposal that would tax properties based on the square footage.

The results showed that even Piedmonters may have their limits.

Both proposals received about the same level of support in an initial question, with 74 percent saying they would vote for the square footage measure and 73 percent for the flat rate extension.

But interviewees’ responses changed after being asked more questions and hearing specifics and pro-and-con arguments, with the square-footage measure retaining support, but the uniform rate tax on all properties dropping — in one version below the two-thirds needed for approval.

The current tax under eight-year Measure A, which expires in June 2021, raises $10.4 million for the district at a rate of $2,656 per each of the city’s taxable parcels, with an allowed annual rate increase of 2 percent. As noted in the arguments in favor, the district has depended on the tax for more than 30 years — and it accounts for more than a quarter of the PUSD budget.

Both groups were asked about separate versions of the assessment rates.

Those quizzed about square footage were asked about a $1.25-per-square-foot rate, which 64 percent found acceptable, and a $1 rate, favored by 76 percent.

Negative arguments pointed out that property owners already pay the combined cost of the existing parcel tax and a $66 million bond measure approved in 2016, and that Piedmont has the highest parcel tax in California. After hearing those points and being asked a final time, the overall favorability of the flat rate tax dropped from 68 to 62 percent, and the square footage from 75 to 73 percent.

But support grew to about 82 percent who were probably definitely in favor of the flat rate at $2,656, and 81 percent for a square footage rate of $1.

In most districts, the timing of a ballot measure is a critical factor, McLarney said, with districts typically choosing to go on the ballot during a presidential or other major election to ensure higher turnout. Lower turnout usually means much of the turnout is of older, more conservative voters who are inclined to watch their pocketbook. In that regard, “Piedmont is an exception,” McLarney said. “You’ve got a measure that is definitely winnable and feasible. ”

Approval ratings are similar to those in the past three elections, he said, later adding, “I have not encountered another community that has been as supportive. That said, I think it’s really important that you make a compelling case.”

But he emphasized that of the two proposals, voters are more sensitive to the flat rate than to the square footage. The survey has a 5.5 percent margin of error.

“When I saw the results I was really excited, I was really happy,” said board member Sarah Pearson. “I was pleasantly surprised. The poll provides valuable information.”

PUSD Superintendent Randall Booker said the presentation is the first of what will be “two or three more meetings to discuss the findings and craft a measure that will fall within the threshold of what voters will accept.