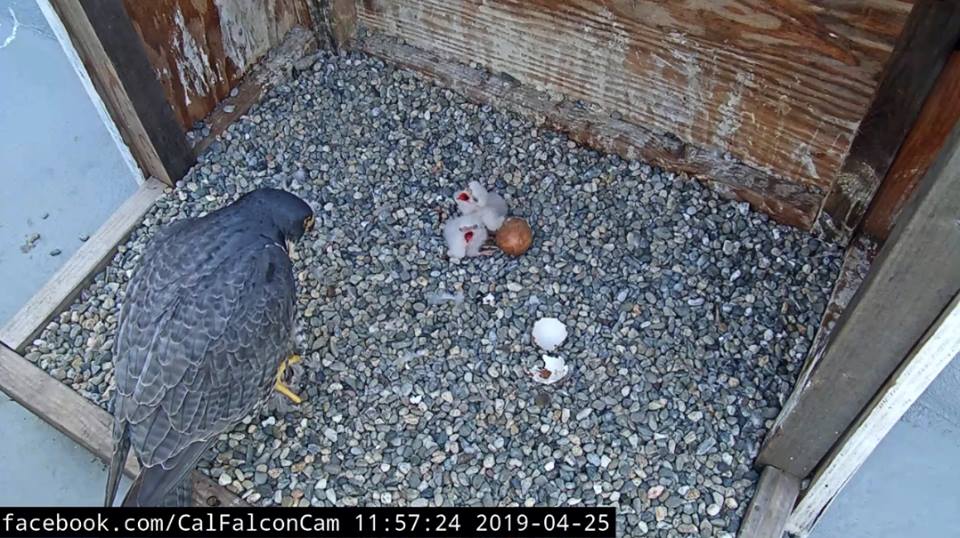 University of California at Berkeley is hosting a #BirddayParty Thursday after Annie and Grinnell, the Peregrine falcons that have set up household atop the campus’ iconic Campanile bell tower, welcomed three new chicks to their nest this week.

The due date for the hatchings was Thursday but Mother Nature intervened a day early for two of the chicks. The third chick then began working its way out of its egg Thursday morning. The hatchings were captured live on the Campanile’s nest cam.

Arguably the most prominent members of the East Bay’s raptor community, Annie and Grinnell have made the Campanile their home since 2017, hatching two chicks that year and three in 2018. They now have a fan base across and beyond the Cal community. They even have their own social media handles and have been posting periodic updates about their expectant family via Facebook, Twitter (@CalFalconCam) and Instagram (@cal_falcons). Followers are encouraged to send their warm wishes to the happy couple using the hashtag #CalFalcons.

Peregrine falcons, the world’s fastest birds, have recovered spectacularly in North America thanks to the Endangered Species Act. While only two Peregrine pairs were known to nest in California in 1970 — the population low — more than 400 pairs are estimated to flourish in the state today.