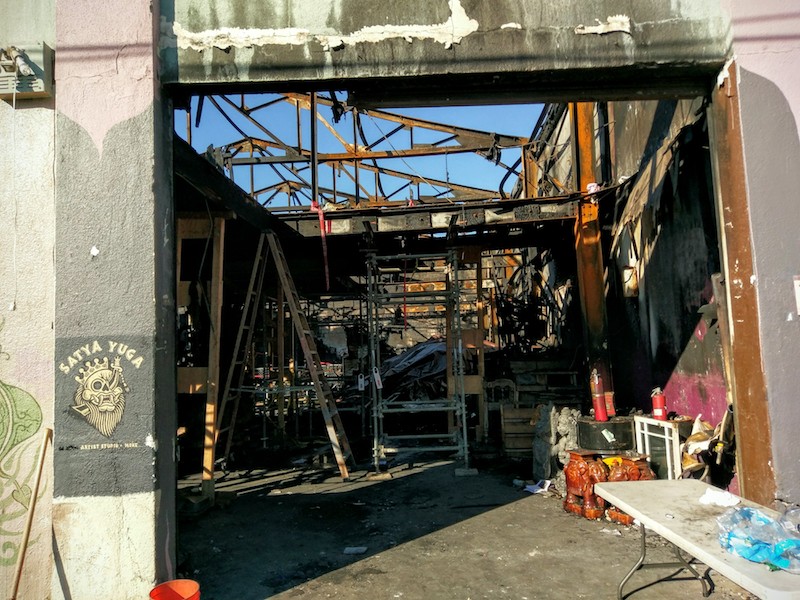 Two of the owners of the Ghost Ship warehouse refused to testify on Thursday about their relationship with master tenant Derick Almena and whether they bear any responsibility for the fire at the warehouse in 2016 that killed 36 people.

Alameda County prosecutors called Eva Ng and her brother Kai Ng to the witness stand in the trial of Almena, 48, and Ghost Ship creative director Max Harris, 29, on 36 counts of involuntary manslaughter for the fire during a music party at the warehouse at 1309 31st Ave. on Dec. 2, 2016. But when prosecutor Autrey James asked Eva Ng if she leased the warehouse to Almena and Nicholas Bouchard on Nov. 10, 2013, she refused to testify, citing her Fifth Amendment right against self-incrimination.

Harris’ attorney Curtis Briggs asked Ng if any of her actions “led to the deaths of 36 people at the warehouse,” and she again refused to answer. Ng, who was accompanied by a lawyer, also refused to answer Briggs’ question if it is true that she knew that people were living in the warehouse, which didn’t have a permit for residential use, at the time of the fire.

Almena’s lawyer Tony Serra also got no answer from Ng when he asked if it was true that “you knew from the outset that there would be artists living at those premises and you allowed it.”

Kai Ng, who was represented by the same lawyer, refused to answer similar questions as well as others. One of Briggs’ questions was whether Kai Ng paid a large sum of money to a public relations office and used his political influence to make sure that the Alameda County District Attorney’s Office wouldn’t file charges against him.

Serra asked if he collected $3 million in insurance payments after the fire, but Ng also refused to answer that question.

The third owner of the warehouse is Chor Ng, the mother of Eva and Kai, but defense lawyers have said she fled to China after the fire.

After Eva and Kai Ng left the courtroom of Alameda County Superior Court, Trina Thompson Serra and Briggs said prosecutors should offer them “use immunity,” which would allow them to testify at the trial for Almena and Harris without having their testimony used against them. But James said his office doesn’t want to offer the Ngs use immunity because it is still investigating the case and hasn’t ruled out the possibility that it might file criminal charges against them at a later date.

However, Serra alleged that prosecutors “are not acting in good faith” and said he thinks they simply don’t want the Ngs to testify. “It’s an abuse of discretion not to grant use immunity and these are material witnesses that the defense needs to develop third party culpability,” Serra said. Serra was referring to the defense’s contention that the people who are most responsible for the fire are the Ngs and government inspectors who knew about safety issues at the warehouse and didn’t do enough to correct them.

Responding to Serra’s comments, James said, “There’s no nefarious conduct on the part of the people (the prosecutors).”

The trial will resume next week when pools of potential jurors will come to court to fill out questionnaires. Jury selection is scheduled to begin on April 16. Thompson has said she hopes that it can be completed in two weeks and opening statements will be presented on April 30 and May 1.