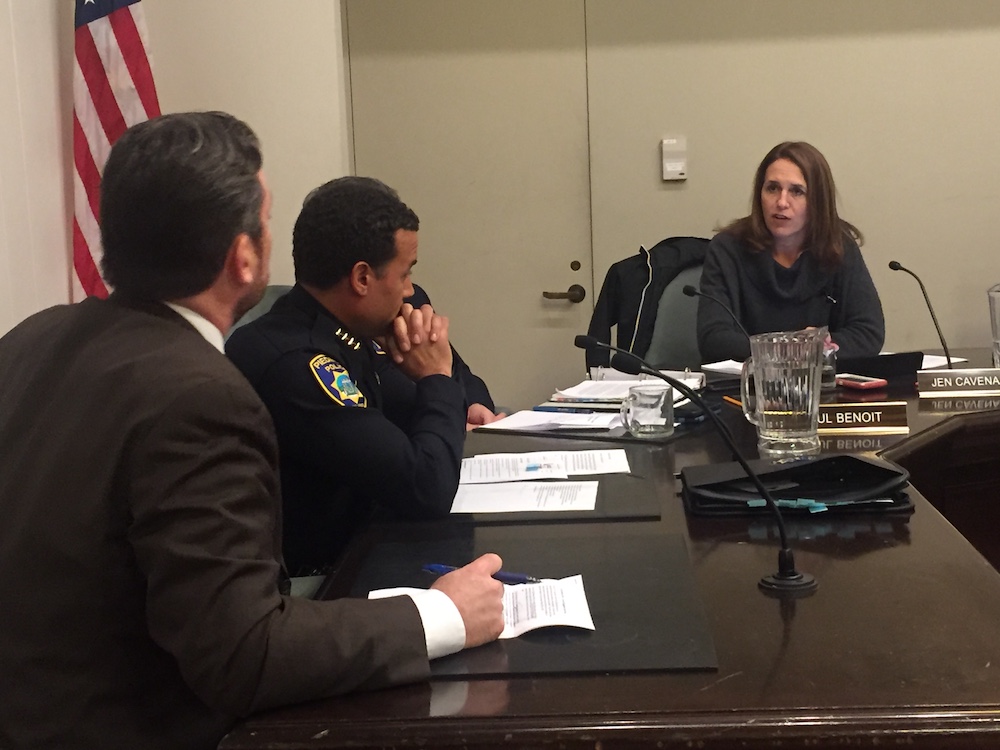 After months of debate surrounding a proposal to bring a Student Resource Officer to upper school campuses in Piedmont, PUSD Superintendent Randall Booker and Piedmont Police Chief Jeremy Bowers shared a revised plan with city and school leaders at a joint forum on Monday afternoon. Their original proposal to use California Department of Justice tobacco grant money for an armed campus police officer was rejected by the school board in February in the wake of public opposition.

As outlined in Monday’s City-School Liaison Committee meeting, the revision seeks to both address health and safety concerns of the school community around use of tobacco and vaping on campus and to enable a police presence as required under the terms of the grant.

According to Bowers, the DOJ is open to allowing some of the $391,599 grant money to be allocated to the school district to hire a health educator for $50,000 a year, while remaining money would pay for what Bowers called a “Juvenile Liaison Officer”,  a full-time police officer who would be the primary point of contact with the school, but who would be stationed at the police department, not on school campuses. Bowers noted that by diverting some of the DOJ funds to PUSD, he would have to ask city council for permission to use other grant money to fill in this full-time position, a job that requires extensive training.

Hiring a health educator is necessary, said Booker, citing community feedback and concerning results from the 2017-2018 California Healthy Kids Survey that showed a high number of high school students vaping at school. “We need to meet the needs before kids are vaping in the classroom, a lot of our work is reactive. How can we fill holes in our educational program?”  Booker said the District would take a data-driven approach to assessing the effectiveness of bringing on a health educator with the goal of reducing on-campus use and exposure to nicotine, drugs, and alcohol products by 10 percent as measured by students’ self-reported responses on the Healthy Kids Survey in 2021-2022.

He also noted that it was important to make the campus safe for students and staff who weren’t using substances. Vaping activity in school bathrooms, for example, shouldn’t force others out of the facilities.

“We are really excited about the opportunity to implement this program and our partnership with the police department.”

In addition to Bowers and Booker, the City-School Liaison Committee included Assistant Superintendent Cheryl Wozniak, Board of Education Trustees Cory Smegal and Amal Smith, Piedmont Mayor Bob McBain and Vice Mayor Teddy Gray King, and City Manager Paul Benoit. Although the Committee is not a decision-making body, members signaled their support for the new plan, acknowledging the work that went into addressing community concerns presented along the way, including what King called “the elephant in the room”,  that while there is support for the proposal in some corners of the community, there is also concern, borne of national research, that SROs on school sites increase racial inequality and bias against students of color.

“I personally think we are in a better place from where we started. We now have goals and an eye on the target that will help focus the program.”

Trustee Cory Smegal, who thanked Bowers and Booker for not giving up after the initial rejection by the school board.

“It’s never a good strategy to take the ball and go home,” said Mayor McBain, also praising Booker and Bowers for their partnership. “We have an opportunity to improve overall student health and safety with funds we did not have before. I hope it does get approved, I am very supportive.”

Next steps: Bowers expects to submit the modified proposal to the DOJ for approval this week. Booker said he will ask the school board to review the plan and act to accept the grant money and approve its use for a health educator at the May 8 school board meeting. City Council is expected to vote on May 20.