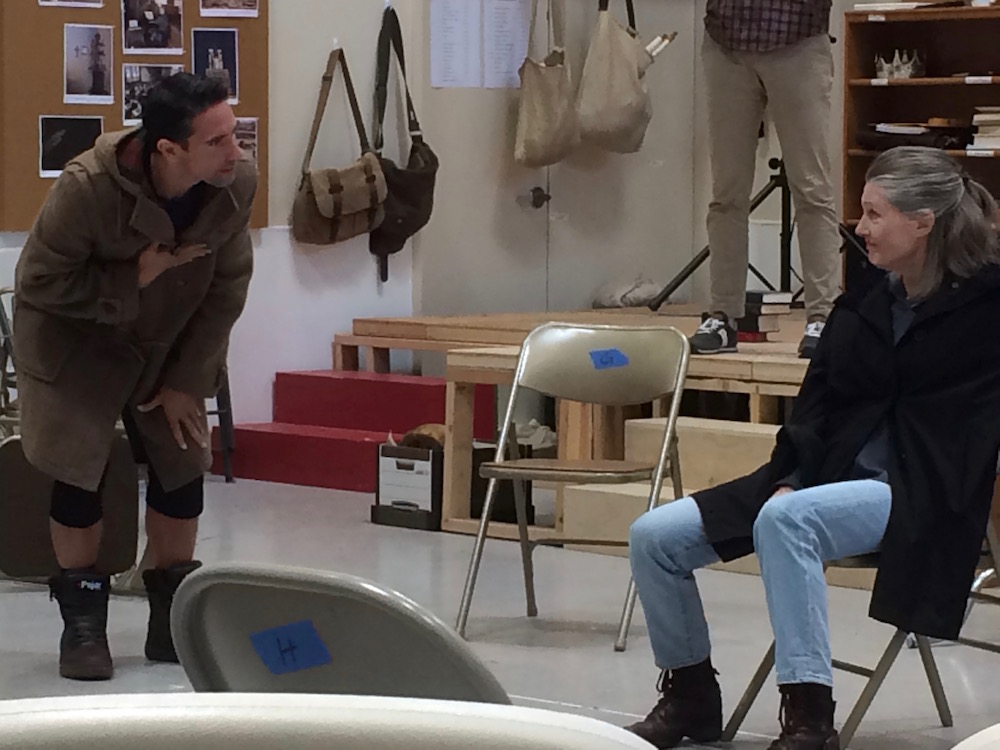 Annette O'Toole and Keith Nobbs in rehearsal for Berkeley Rep's The Good Book on April 18.

If a cell phone “pings” during a play, the audience is annoyed, the actors interrupted, and a moment of theater lost forever.

But at rehearsals for Berkeley Rep’s The Good Book (previews begin April 25) the errant sound of a phone brings out laughter among the cast and good-natured ribbing of the phone’s owner, Tony Award-winning playwright Denis O’Hare. Joining in the teasing is O’Hare’s co-writer on the production, Obie Award-winning playwright/director Lisa Peterson (who collaborated with O’Hare on An Iliad). Peterson provides one of those only-in-rehearsal moments and uses the interruption to clarify her vision: The bells the actors chime during the scene should be continuous. “See?” O’Hare says, bringing back the earlier humor, “Lisa actually wanted more bells anyway!”

The camaraderie shared by the players bonds them as much as the script. Which is exactly why attending a rehearsal of The Good Book affords a rare opportunity. It is in these authentic, intimate rehearsal moments, as well as during an interview with actress Annette O’Toole who plays the role of Miriam, that give us an exciting inside view of this eagerly anticipated production.

The Good Book brings together three distinct stories. Actor Keith Nobbs plays Connor, an earnest, 20-year-old man who ages during the play to 40, searching for self-identity and belief. O’Toole’s Miriam is an articulate biblical scholar thrust into confronting faith and her own mortality. The epic history of the Bible itself is the storytelling “thread” bringing the characters’ lives together while revealing the book’s vast, cultural imprint.

O’ Toole is best known as a tv actress, with recurring roles on series such as Nash Bridges and Smallville. She has also appeared in films, including Superman III and 48 Hrs. Less well-known is her musical skill. In 2003 she received an Academy Award nomination for Best Original Song for A Kiss at the End of the Rainbow, co-written with her husband, Michael McKean, putting an impressive stamp on her credentials as a singer/songwriter.

“My husband and I have been working on a musical for years,” she says during a break in rehearsal. “It’s mapped out, we just have write it. But we’re always so busy working on other projects, so it’s slow going.”

Of The Good Book, O’Toole says the greatest challenge is stamina. “I’m onstage a lot and if I’m not in a scene, I’m backstage doing a quick (costume) change.” And then, there’s focus. “On television, you’re getting ready to do an emotional scene and people all around are talking, yelling, carrying lights. I’m lucky I’ve worked enough on television sets to build up my focus. It’s like when I’d read as a kid, my mother would have to shake me by the arm to get my attention.”

In rehearsal, hyper-focus translates unquestionably as O’Toole within five minutes of the merry cell phone interruption describes (in character as Miriam) awareness of her own mortality. What begins as Miriam’s clinical, mathematical analysis of the number of good books she’ll need to read each year before her life ends leads to painful questioning. Has she devoted too much time studying the Bible?. Everyone in the room, including the crew and O’Toole, is red-eyed and near tears.

O’Toole says eclectic principles guide her acting approach. Among them, “know the absolute rules and then go ahead and break them,” and “I can do anything. Including perform staged combat scenes like I was Spartacus, with a big brace on my upper arm and big strap around my shoulders and even friends who came to the show didn’t know my arm was broken in two places.” Also a belief in “hard, hard, incremental work,” and learning what to eat before a performance are vital. “I’ll get to a certain point and realize words aren’t coming and realize I need raisins, or tea with honey in it. I tend to forget to eat.”

Watching O’Toole, O’Hare, Peterson and the rest of the actors in rehearsal is to enjoy their team work and intense, relentless pursuit of the quick, alive-to-the-moment drama and joy of live theater. The Good Book is scheduled to run until June 9.