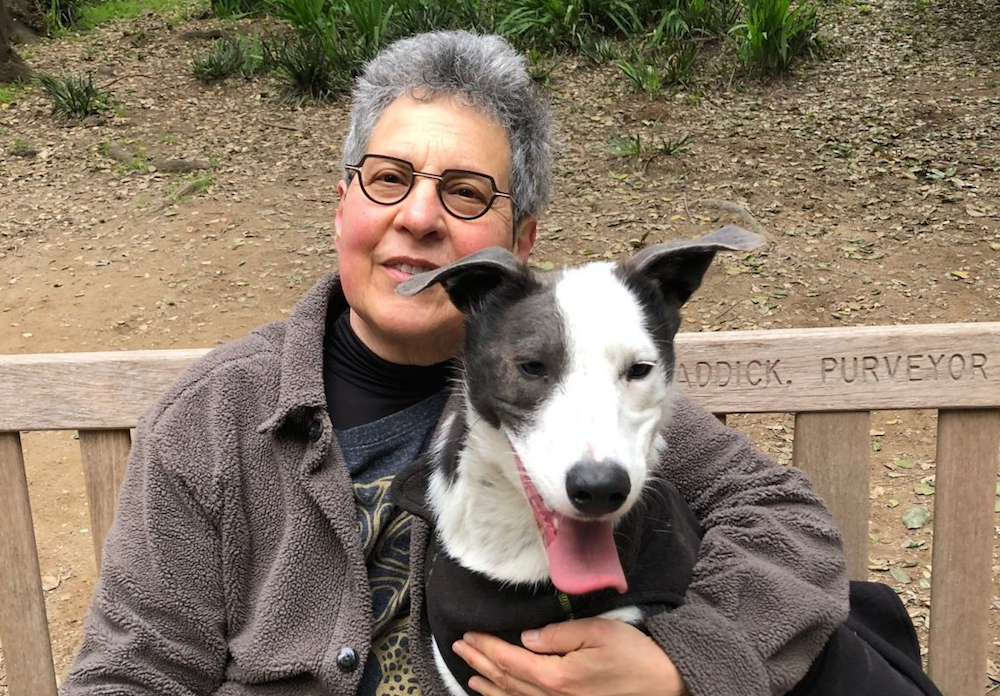 Breed: Border Collie mix, probably with some McNab (a herding breed that originated in Mendocino County).

Adoption story: Lobo rescued us at the Adopt-a-Thon in Jack London Square last July. We had just lost our very old, beloved dogs, and decided we needed a puppy. Lobo was one of a litter of 12 (!) born in the Milo Sanctuary in Willits, in Mendocino County. We hung out with the 3-month old pup for about an hour, peering into his gray eyes, enjoying his energy, inquisitiveness, and resilience. He was the last pup in the litter up for adoption, and we realized he needed us as much as we needed him.

Likes: Running, chasing and being chased, or chewing. His herding instincts take over at Dracena Park and he loves to run around with his pals.  When he gets home he is very interested in chewing — everything. Recently we discovered Himalayan dog chews made of yak and cow milk that take him hours to gnaw.

Interesting facts: One of Lobo’s habits is hugging and kissing humans. When friends come over and sit down in the living room, Lobo climbs up on the sofa next to them, puts his paws on their shoulders and tries to lick their ears. If you’re sitting on a bench in Dracena he might try that with you, too.

Anything else we should know:

Lobo has sensitive skin. He has to wear a jacket to prevent sunburn and other injury. The vet told us we should buy him a Lycra jacket with sleeves down to his ankles, but we’re procrastinating. We don’t think he’ll like that. Does any self-respecting dog like a jacket? But we have to protect our special fellow.