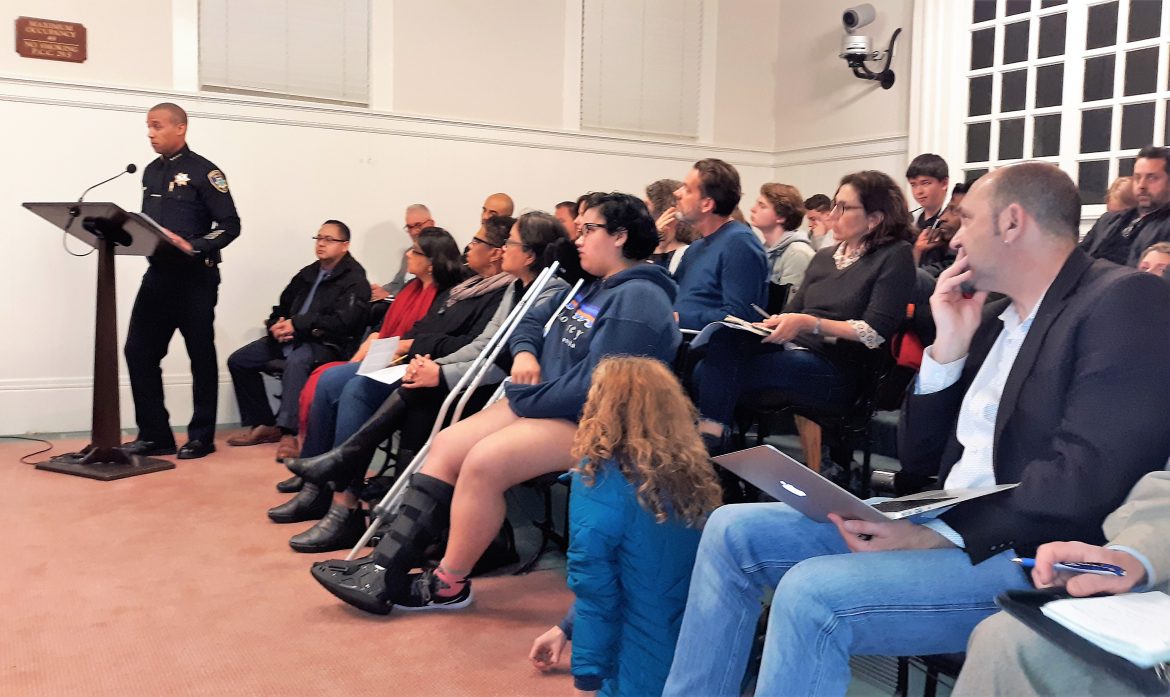 Police Chief Jeremy Bowers addressed school board members regarding a proposal for an SRO in front of a full house at City Hall on February 27.

At a packed Wednesday night meeting, the Piedmont Unified School District board of education declined to support a proposal to bring an armed student resource officer to upper school campuses by a vote of 4 to 1. Trustees Sarah Pearson, Megan Pillsbury, Cory Smegal, and Andrea Swenson voted to reject the measure; Amal Smith voted to approve the grant. Although the board did not support the proposal, it praised the collaboration between the district and police department around this issue and asked that they continue working toward a solution that would serve the needs of the school community.

The subject of several months of debate between parents, students and staff, the school resource officer (SRO) would have been part of a $391,599, three-year grant awarded to the city in December under the California Healthcare, Research and Prevention Tobacco Tax Act of 2016. The concept of an SRO came out of a series of meetings between PUSD Superintendent Randall Booker and Piedmont Police Chief Jeremy Bowers in the 2017-2018 school year. The two collaborate regularly to discuss a range of issues, but it was strategizing over how to address the well-being of students and the frequency of calls for police to come to campus — as many as two times a week on average (over 400 times from 2013-2018) — that prompted the idea of having an SRO program.

Superintendent Booker shared the results of a survey sent to parents, students, and teachers in early February that showed parents and students clearly opposing an SRO program, but teachers responding more favorably to the idea. Some data points cited by Booker showed that 61 percent of parents think an SRO is not needed. Of teachers, nearly 50 percent think an SRO is needed and 59 percent believe an SRO could be an effective complement to school staff.

And while 68 percent of parents think an SRO would set the wrong tone at the schools, only 36 percent of teachers think the same. Having an armed SRO was a major concern for 75 percent of the surveyed parents.

Superintendent Booker said there is a need to help mitigate the growing problem with vaping, drinking, substance abuse, and a variety of issues that impact students on campus. An SRO, trained as a counselor as well as in law enforcement, could address a range of campus issues, including outside threats to the schools, incidents of students posting threatening videos, bringing weapons to school, hazing, and general concerns about students’ mental health.

Booker cited statistics from the recently released 2018 California Healthy Kids Survey that found that in Piedmont, 38 percent of high school seniors report binge drinking, while 24 percent report having come to school drunk or high, and 24 percent vape. Thirty-one percent of high schoolers experience harassment or bullying while 28 percent of students feel chronic hopelessness and sadness. These statistics drive the behaviors that bring police to campus, behaviors which Bowers and Booker feel would be helped by the presence of an SRO.

Representatives from police departments in Los Gatos and Atherton and a representative from the Menlo School attended the meeting at the invitation of Chief Bowers to share their experiences with implementing successful SRO programs in their communities.

Board members, who received 41 emails opposing the idea of placing an armed SRO on school sites and only a few supporting the measure, weighed in on the proposal, which four of the five ultimately rejected.

Trustee Swenson told Chief Bowers there were things she liked about the proposal, but wanted him to clarify whether or not there was flexibility in where an SRO would be housed, as there was clear concern surrounding having an armed officer on campus. Bowers noted that there was some flexibility.

“There are no studies that show this actually increases safety,” said trustee Smegal. “I really do wish we had had this discussion before the grant was filed.” She also cited the Piedmont Appreciating Diversity Committee’s concerns about the proposal as a factor in her thinking, as well as teacher concerns around cost and the fact that neighboring districts do not have an SRO program.

“We have the Wellness Center. I’d rather we fund a counselor to do some training with the police,” said trustee Pillsbury, who said she would prefer to rely on existing systems in the schools right now. She also said research has shown that students of color are disproportionately impacted by such programs.

Trustee Pearson said the proposal didn’t feel consistent with the district’s efforts to be welcoming and inclusive. However, she said the timing of the results from the Healthy Kids Survey that Superintendent Booker cited did highlight a clear issue in the school community around substance abuse that needed to be addressed.

Many students in the standing-room-only crowd spoke against the SRO concept, noting that students struggling with mental health issues or tobacco addiction, for example, would benefit from speaking with a counselor, not a police officer.

Piedmont High School teacher Ellen Walsh took issue with the effectiveness of one person responsible for three campuses, noting that the impact would be spread too thin and suggesting that a better option is to pursue more in-depth study into successful strategies to help students.

PADC board member Jill Lindenbaum said that if vaping is the issue, then education about e-cigarettes and vaping should begin earlier, before the students “are practically adults.”

Tonda Case, co-president of PADC, who had addressed the issue back in January and once again thanked the board for their comments, said there are other ways to address our students’ needs. “This is a very expensive way to have these limited interactions with students,” she said.

Board member Amal Smith told the Exedra after the meeting she felt comfortable supporting the proposal and wants the district and police department to continue working together. “There is a lot of merit in the SRO proposal that I believe can support our learning community. Given the concerns and deep interest by our stakeholders, I truly believe we can build an SRO program that will work here and reflect our values. As importantly, if our community has issues with law enforcement and is dedicated to restorative justice, then our best work is done by including our local police into our schools in positive ways, not by pushing them away. To me, restorative justice work means bringing everyone in and directly addressing the hard work.”

Editor’s note: Did you know that Piedmont’s KCOM 27 posts video of all city and school board meetings online? You can stay informed even when you can’t attend meetings.