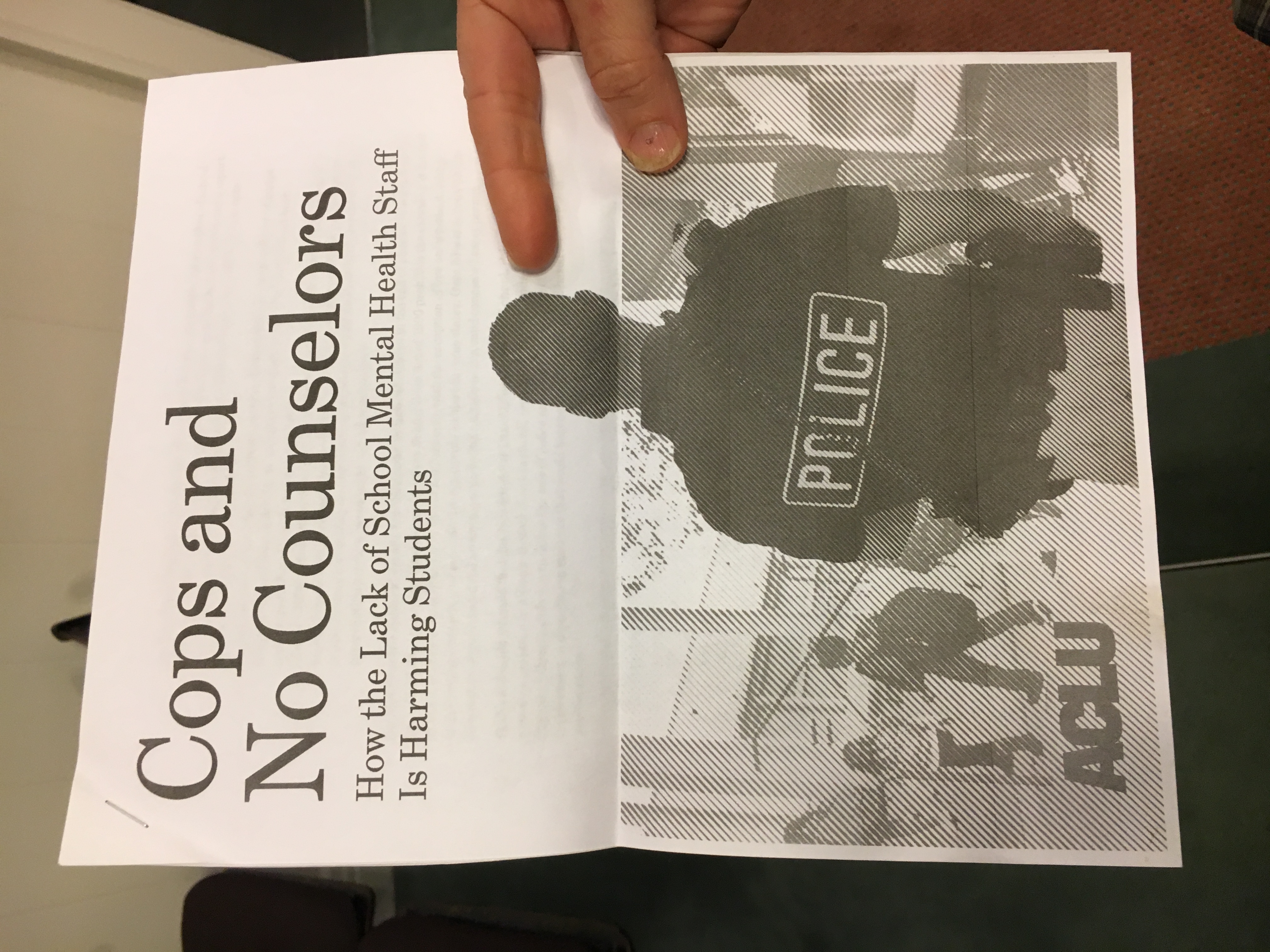 Parent Jill Lindenbaum displays a copy of the new report “Cops and No Counselors.”

Faced with a sharp divide in the community and questions of their own, school board members this week decided to “take a step back” to further evaluate a three-year $390,000 state grant that would dedicate a police officer to the district’s secondary campuses.

The proposal discussed March 13 was a modification intended to address concerns expressed by the public and officials when the California Department of Justice Tobacco Grant Program grant was discussed by the board Feb. 27.

The original proposal, turned down by a 4-1 board vote, was to have an armed officer based full-time on campus who would be trained as a counselor and focused on student issues such as vaping, drinking, substance abuse, and social media use.

The modification, reached by Police Chief Jeremy Bowers and Superintendent Randall Booker, was meant to address concerns about an ongoing armed presence by having the officer based at the police station and coming to campuses on an as-needed basis or to conduct workshops and classroom seminars.

The officer “would be on campus as required by staff. In effect it’s what we do now because we don’t have an SRO,” Booker said.

Otherwise, the SRO would only likely be on school grounds about twice a week, he said, equal to the average number of calls now received for assistance during the academic year.

Bowers sees the SRO proposal as an opportunity for the department to build relationships with students and faculty, provide age-appropriate information to students in high school and lower grades, training for faculty, crisis support as needed.

The officer would be “a one-person point of contact” between the school district and police, he said.

During public discussion letters were read from two groups of parents supporting the SRO proposal.

One, signed by seven mothers with 17 children between them in the district, expressed disappointment in the earlier vote and hoped the board would reconsider, asking “Why would you doubt your own police chief.”

Another, read by parent Amy Settlemier on behalf of five mothers with 14 children, likewise stated support for Bowers and the SRO proposal.

But other parents said the modified proposal failed to address community concerns and maintained that an officer on campus is the wrong approach.

There’s “still a strong sense that this doesn’t cut it,” parent Mahvash Hassan said of the revised proposal, adding that all sides need to “continue to work to figure out what the best possible response is.”

The district’s needs could be met “more efficiently, more effectively with a different kind of professional,” said Amy Maidenberg, noting students who said they “ would feel more stress, not less” with an armed officer around.

Parent Jill Lindenbaum showed the board a copy of “Cops and No Counselors”, a recent American Civil Liberties report (https://www.aclu.org/report/cops-and-no-counselors) on the lack of mental health staff at schools in the United States and the consequences for students.

The state grant is specifically for an SRO. A different approach would be “dependent on where we can get funding,” Booker said in his presentation to the board, noting that “different districts have different abilities to access funding” from state programs or by partnering with health organizations such as Kaiser Permanente.

The three board members present were in agreement that the entire issue needed more evaluation. They decided to delve deeper into the district’s safety and wellness needs before making a final decision on the SRO grant.

“I think we need to take a step back,” Trustee Megan Pillsbury said. “As a board member, I think we need to look at our overall policy” and “really review our whole comprehensive safety plan” before making a decision.

“I think we have too many different views in our community to move ahead with an SRO,” she said.

Her views were echoed by Trustees Cory Smegal and Sarah Pearson.

“We’re kind of caught in a tricky position,” Pearson said. “We need to say thank you, but no thank you. The most responsible thing to do is say ‘OK, we have to regroup’”

The proposal still has yet to come to a final vote and Bowers remains optimistic about devising an acceptable solution while the funding remains available.

“I think what we heard tonight was that the various opinions on this topic are all over the map. Hopefully something can be worked out,” he said after the meeting.

“I have no doubt the program would benefit this community. At the end of the day, I will respect the decision they make and look to partner with everybody, in all aspects, to keep the community safe.”

The district budget is balanced and meets the required 3 percent reserve for the current school year, but shortfalls requiring spending reductions will be needed in 2019-20 and 2020-21, the board learned  this week in an update from Chief Financial Officer Ruth Alahydoian.

A positive certification of the budget is needed to meet new Alameda County Office of Education.

The district has identified $1.2 million in cost reductions that will keep the budget balanced for the next school year, and “will need to make an additional $460,000 in budget adjustments to end the year with the required 3 percent reserve” in 2020-21, according to the report.

Figures are very preliminary and subject to several variables, including the budget priorities of new Gov. Gavin Newsom, Booker said.