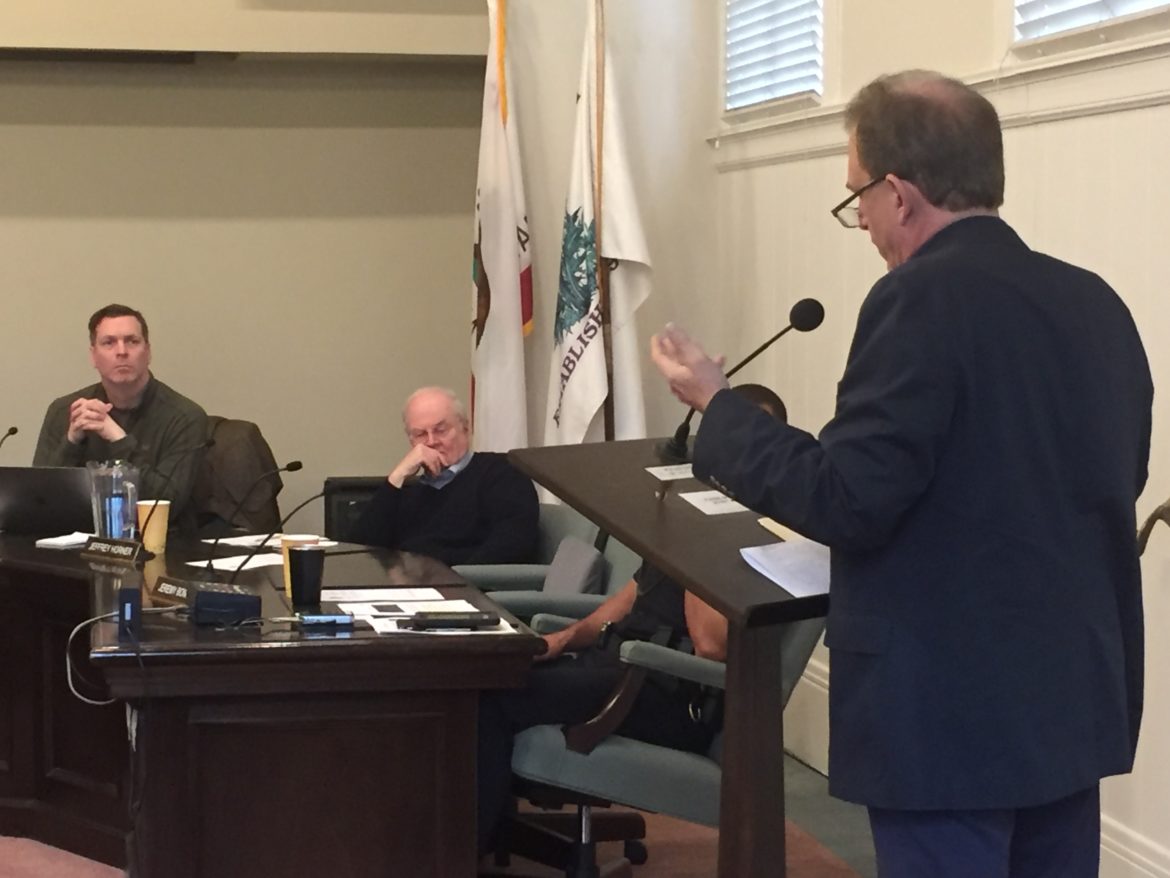 The city’s Public Safety Committee is working to have a specific proposal for new public safety cameras ready for review by the City Council in June, committee members said Thursday night.

The next task in that quest, committee members said, is getting more public input about the plan, which calls for public safety cameras at six local intersections at a cost of approximately $45,000 to $50,000 per intersection. Neighborhood meetings are scheduled for April 3 and April 9; committee member Chris Houlder said these living-room meetings have drawn good crowds.

The city’s preliminary proposal is to keep the city’s lone trial camera, at Grand and Oakland Avenues at the main southern entrance of this small city since 2012, as well as at Grand and Wildwood Avenues, Grand and Rose Avenues, Sunnyside and Olive Avenues, Trestle Glen Road and Cavanaugh Court, and Kingston and Monte Cresta Avenues. These locations may change based on various factors, the city says.

Police Chief Jeremy Bowers said it matters where the cameras are placed. “It’s part art and part science,” he said.

Robert Berger, a Trestle Glen resident, told the committee Thursday he wants to make sure the planned Trestle Glen/Cavanaugh cameras are positioned properly.  They’re needed there, he said, given a recent spate of robberies in that area. He isn’t sure the proposed placement would be most effective.

“Any criminals that might come down Trestle Glen from Park … they won’t be captured,” Berger said.

Committee members said that’s the sort of residents’ input they’re looking for. And while the neighborhood living-room gatherings have drawn well, a March 5 town hall-style meeting attracted only about 20 people. That didn’t surprise Berger, who said the neighborhood gatherings literally appealed to people close to where they live.

“If something doesn’t impact people specifically,  it might get less response,” he said.

Houlder suggested more specificity could be achieved with a “broad questionnaire” online survey, which was suggested at Thursday’s meeting.

Committee members also noted that a frequently-asked-questions primer advertised on the city’s website has shown to be a “dead link,” and asked Bowers to get that fixed.

“If people don’t know how the cameras are going to be used, you’re going to get a lot of not-very-helpful responses,” said committee chairwoman Lynne Wright.

There has been some concern about the public safety cameras robbing some citizens of privacy. With the proposed cameras are planned for public places, committee members said they don’t foresee much problem with that. But Bowers said there’s some ability to redact images from the video if they’re deemed to invade someone’s privacy.

The public safety cameras are distinct from, and different than, the city’s 39 license plate reading cameras. The city is also planning an expansion of the city’s LPR camera network to cover three more intersections. That plan could come to the council in April or May.