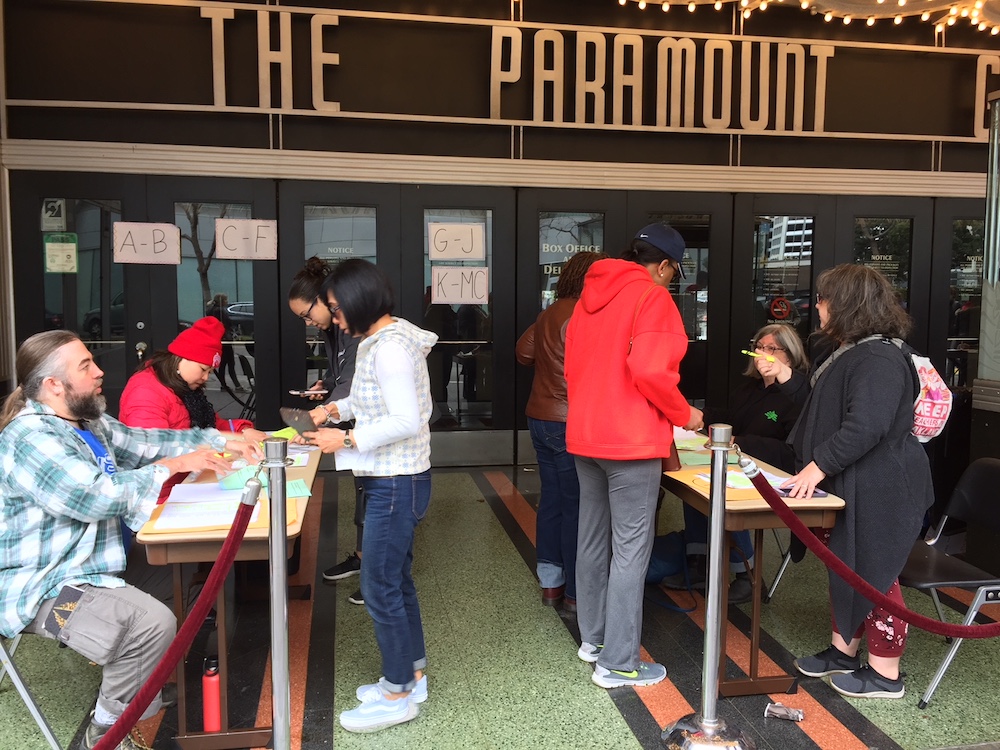 Teachers casting their votes at the Paramount Theater

Teachers and students at Oakland public schools are heading back to classes Monday morning after teachers voted Sunday to ratify an agreement that gives them a salary increase and reduces class sizes.

The new overall agreement provides for an 11 percent teacher salary increase over four years, a one-time 3 percent bonus; a one-student reduction in class size at high-needs schools starting next year, and a one-student reduction in class sizes across all district schools in 2021-22; a five-month pause on school closures and consolidations; a moratorium on new charter schools; and more counselors, psychologists, speech pathologists and support staff for “newcomer” students; and a new salary schedule to support nurse recruitment.

The teachers, members of the Oakland Education Association, cast their ballots at the Paramount Theater in downtown Oakland Sunday today and voted to approve the two tentative agreements that comprise the new contract.

The vote was not an overwhelming approval. The first tentative agreement, which deals mostly with the 3 percent retroactive bonus for 2017-18, was approved by a vote of 64 percent yes, 36 percent no, or 1,269 to 701. There were five abstentions.

The second tentative agreement was for the rest of the contract, including salary increases, for the 2018-19 and 2020-21 school years. It was approved by a 58 percent “yes” vote, 1,141 yes votes to 832 no votes, with four abstentions. Each of the tentative agreements required a simple majority vote for passage.

Keith Brown, president of the Oakland Education Association, said in a statement Sunday night that the main terms of the agreement are a significant improvement over what the Oakland Unified School District first offered.

“We look forward to being in our classrooms again after having to strike to bring our Oakland students some of the resources and supports they should have had in the first place.”

“This victory, accomplished through our collective strength on the picket lines with Oakland parents and students, sends the message that educators will no longer let this school district starve our neighborhood schools of resources,” said Brown

Sunday’s vote ends a seven-day strike that left the Oakland Unified district scrambling last week. The Oakland Education Association, which represents 3,000 teachers, nurses, counselors and other staff, announced results of the vote at about 8 p.m. Sunday, about four hours after voting was to have concluded.

The teachers’ strike began Feb. 21 after two years of failed negotiations between the union and the school district. The full agreement can be found at https://oaklandea.org/updates/oea-reaches-tentative-agreement-with-ousd/

Brown said Sunday night that the contract vote isn’t the end. “Our fight is not over, though. Oakland educators spoke clearly today at our ratification vote that this agreement will not be the end of our struggle, and we will continue to fight in Oakland and Sacramento for the schools our students deserve.”