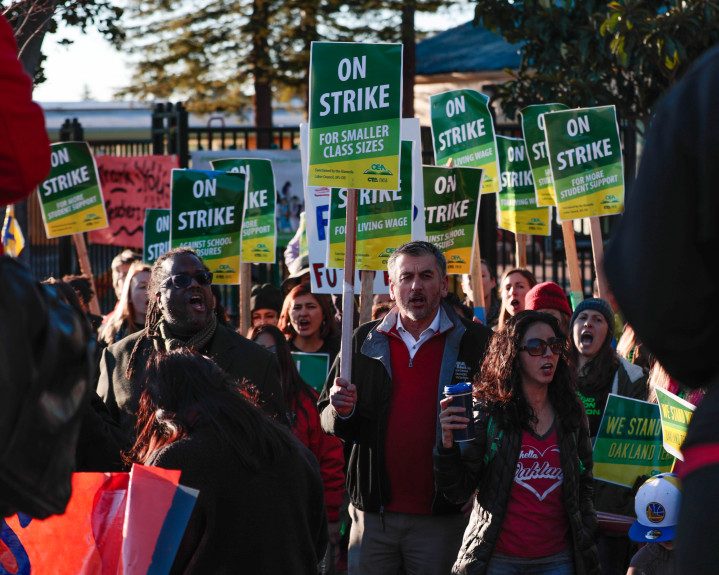 Teachers picket in Oakland on Thursday, Feb. 21, 2019, in California's second major school strike this year. As in L.A., the union issues include the growth of charter schools.

Mar 1, 2019 – The Oakland Unified School District and the union that represents 3,000 teachers, nurses, counselors and other staff have reached a tentative agreement that would end their seven-day strike, both sides said on Friday afternoon.

The Oakland Education Association, which represents teachers and other employees, said in a tweet, “After seven days on strike – with 95 percent of our members on the line, 97 percent of students out of school and tens of thousands on our picket lines and rallies – we have reached a tentative agreement.”

The school district said in a statement that it “is proud to announce that it has reached an agreement on a new contract that provides a total compensation increase of 14 percent – an 11 percent ongoing salary increase with a one-time 3 percent bonus for educators.” The district said, “It also reduces class sizes and maintains the fiscal solvency of the school district. This is a big win for our teachers, students and community.”

The union agreed that the tentative pact will result in lower class sizes, with phased-in class size reductions at all schools. The union also said there will be a five-month pause in closing schools, which has been a key issue for the union, more support services for students and lower caseloads for special education teachers and counselors.

In addition, the OEA said the school board will vote to push the state to impose a moratorium on adding more charter schools in the district.

“Today marks a sea change for the district as we take a major step in support of our teachers and students,” Oakland Superintendent of Schools Kyla Johnson-Trammell said in a statement.

Our teachers are the core of everything we do as a school district and we are pleased to have reached a tentative agreement that shows them how valuable they are.

Johnson-Trammell said, “The contract will help ensure more teachers stay in Oakland and that more come to teach in our classrooms and support our students.” Johnson-Trammell said the strike “was difficult for the entire community as it threw much of the city into uncertain waters and disrupted many lives.”

School board president, Aimee Eng. “This contract is a compromise made by people who worked together to focus more of our energy and resources in the classroom. We must thank State Superintendent of Public Instruction Tony Thurmond and Assemblyman Rob Bonta (D-Alameda) for the critical roles they played in helping us reach an agreement.”

The OEA said the tentative agreement must still be ratified by a majority vote of its members and the vote will be scheduled shortly. Apparently hoping that teachers vote to approve the agreement over the weekend, Johnson-Trammell said, “On Monday we look forward to everyone being together again in the classroom and engaged in teaching and learning.”