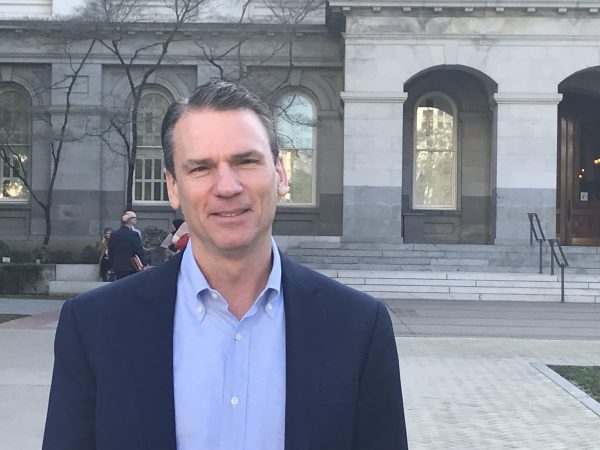 Alastair Mactaggart is the Board Chair of Californians for Consumer Privacy.

With 36 weeks left before the California Consumer Privacy Act takes effect, lobbyists on all sides of the law are trying to get favorite amendments adopted, though at this point the law appears on track to survive this final gauntlet.

For unfamiliar readers, CCPA is the nation’s strongest ever privacy law, and will go into effect next January. It will allow Californians to find out what information a company has collected about them; tell the company to stop selling it; and require the company to keep their personal information safe.

While the CCPA is a milestone in privacy legislation, its success also raises new questions. For this, the Exedra turned to Piedmont resident Alastair Mactaggart, who created and sponsored the ballot initiative the led to the passage of CCPA. Mactaggart, board chairman of Californians for Consumer Privacy, spoke to the Exedra’s David E. Thigpen

Q: You were central in bringing the CCPA to life. How has your view of the internet and privacy changed since you joined this fight?

A: Two years ago I thought of privacy in terms of how much companies know about you and what they do with that information. My view is very different now. I think privacy is the wrong word. Privacy is just one piece of something much larger. What worries me more now is how much control a handful of corporations have over the economy.

Q: You took on some very powerful interest groups in this fight. Describe the opposition you faced, and the tactics they used.

A: I tallied up the market cap of all the companies opposing us. It was $6 trillion. All the usual suspects came out against CCPA: Amazon, Google, Verizon, Facebook, Microsoft, Charter, Cox, and others. FB was part of the founding opposition.

Q: And who were your allies?

A: There were many investors and powerful people who wanted to help but felt they couldn’t. One billionaire told me while he loved what we were doing, he couldn’t support us because Google and Facebook could potentially hurt his business! And on the other side, the privacy advocates didn’t welcome me, at least not initially.  They were worried I’d lose badly, and many told me that resulting loss would set the privacy movement back 20 years.

Q: How is it going in Sacramento?  Do you think the law will be weakened before it goes into effect in January 2020?

A: Well, my crystal ball isn’t better than anyone else’s, but I will say that I’m visiting Sacramento almost weekly, and the legislators I meet with all seem to understand that privacy is an idea whose time has come.  Remember, this law passed out of both the Assembly and Senate unanimously.

A: Facebook and Google track you on basically every website you ever visit. This allows them to know almost everything about– where you go, what you eat, watch, read, what you’re thinking and what you’re worried about.  Then, they leverage that to dominate the advertising business.  And because they know everything about billions of consumers, they have a huge head start.  It’s a continuous circle where they become more and more dominant.

Q: Would you say these corporations are being unfairly anti-competitive?

A: There’s not much competition left. Facebook and Google control 70% of the digital ad market and 90% of its growth. Until 2014 Facebook required that if you had an app it had to send its info back to FB. The only analogy I can think of is 120 years ago — the big business trusts of the early 1900s.

Q: But some skeptics say it’s not so bad: consumers voluntarily give up their data, and big tech companies are a kind of infrastructure, so bigger in this case is more efficient, not worse. Would you agree?

A: It’s voluntary in name only.  Consumers don’t have a choice.  There is no meaningful choice today: you have to have a phone, use the internet, use the apps that make the world function today, whether you’re checking to see if your kids’ school is closed due to the storm, or whether the train is running late.  Big tech wants you to believe there’s a voluntary exchange, but it’s actually forced and involuntary.

Q: What are some of the other things you’re worried about?  You spoke about elections at a Senate Judiciary hearing last week in Washington, D.C. — can you talk about that?

A: The implications of this new technology are profound for democracy. Search engines and social media companies can manipulate your search results and newsfeeds, with the intent of influencing your vote for their own purposes, and it’s both legal and requires no disclosure.  That’s staggering.

Many people dismiss this debate as a wonky argument about who knows what you’ve bought, but it’s actually about the future of our society. Just look at what’s happened to journalism. This technology has devastated the free press. Look, we’re always going to have a struggle between cultures and societies that gravitate toward authoritarianism and those who go toward democracy. The internet is both the greatest invention of all time and a powerful authoritarian tool. I thought I’d be one and done after the privacy issue but I’m getting a glimpse of the future and there’s more work to do. We have to get this right.