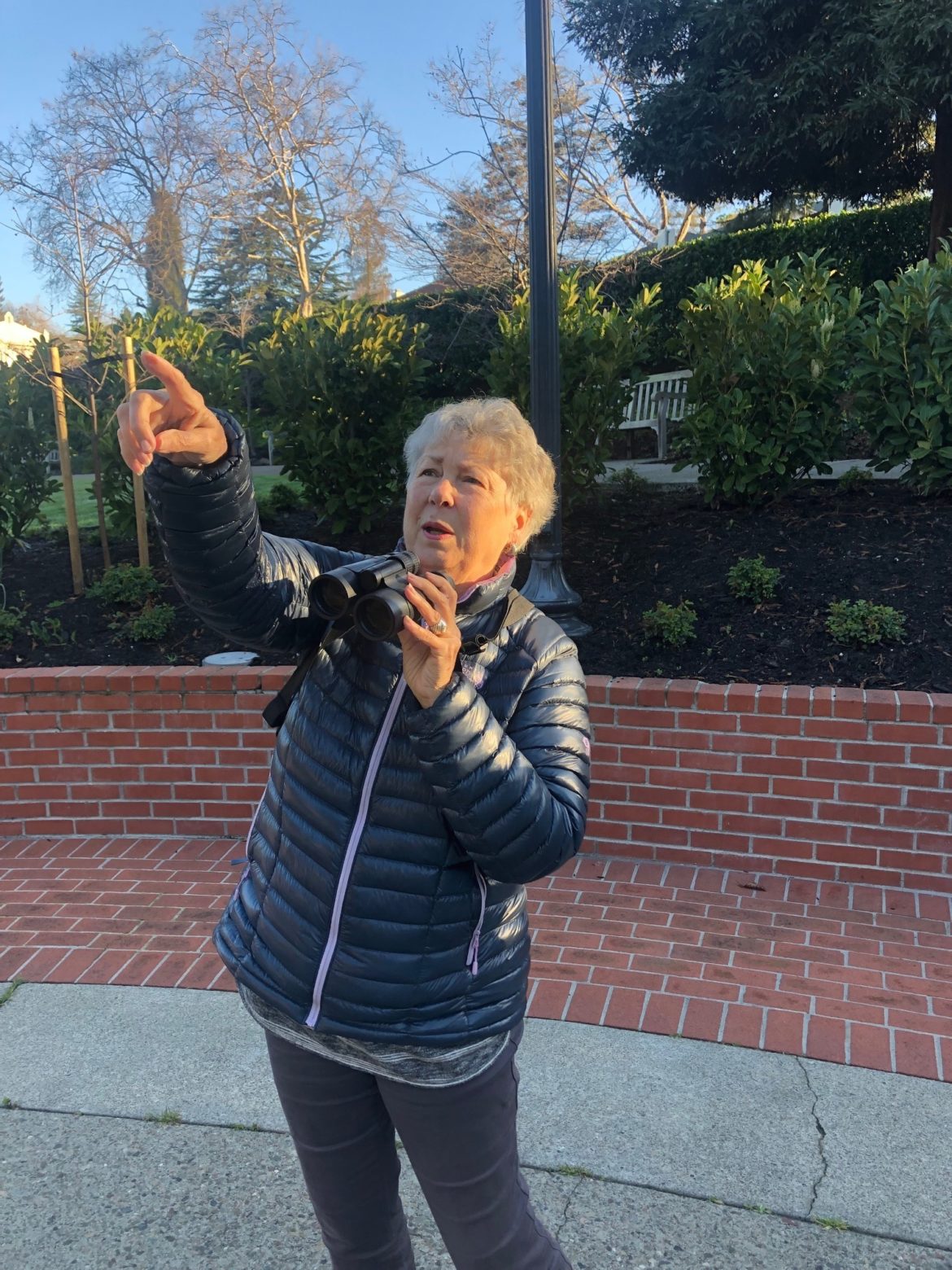 Just before morning traffic begins whooshing along Highland Avenue, Valerie Matzger leads us to a quiet spot near the Piedmont Community Center. Craning her neck skyward, she grows still and focuses on a twittering sound floating down from the branches of a towering evergreen. “Sometimes the best thing about birding is to stay put,” she says. “Let the birds come to you, and listen. It’s all about the ears.”

Bird-watchers may be commonly known for their binoculars and funny hats, but Matzger is more likely to whip out the iBird Pro app on her phone to identify that rare bird she’s never seen. Matzger, a landscape designer and former Piedmont mayor and council member has been a keen birder since the early 2000s, making bird-spotting adventures as far away as Zambia, Panama, Ecuador, and Kenya. But here at home among the tall trees of Piedmont she says there are many avian beauties to be photographed, observed, or simply admired.

In just a few minutes of listening and watching one recent morning near Piedmont park she logged a half dozen sightings, including a Townsend’s Warbler, a Ruby-crowned Kinglet, a Lesser Goldfinch, a Mourning Dove, and a Brown Creeper. “This is a great time to be out,” says Matzger. “Piedmont is along the Pacific Flyway, so in addition to our local birds we get many visitors.”

The Pacific Flyway is an aerial path that runs from Alaska to South America and is a major freeway for migratory birds. Along the Flyway’s thousands of miles, birds wing their way north in summer and south in winter in search of food and a comfortable climate. “Our climate makes us a resort,” explains Matzger. “Lots of birds winter here. For others, sometimes storms can push them off course and they’ll stop here. A few years ago I saw a Painted Bunting in Rockridge.”

Although the local birding community in this part of the East Bay is loosely organized, many birders including Matzger belong to the Golden Gate Audubon Society, which in addition to helping organize birders, fights to protect their flying friends from wind turbines, overbuilding and environmental destruction. Golden Gate Audubon also conducts a yearly Christmas Bird Count, an important survey which is used by ornithologists and other wildlife experts to assess the health of the bird ecosystem.

Matzger’s love of birds grew out of her interest in the outdoors. One day her husband John, a retired public defender and active fly fisherman of the catch-and-release variety, invited Valerie to join him fishing. “Fishing didn’t thrill me,” Valerie remembers. “Instead I joined the Oakland Museum of California as a docent which helped spark my interest in plants and animals of California.”  And as a professional landscape designer she had a deep appreciation of how natural features and habitats can work in harmony for all living things — animals and people.

Birds are facing many obstacles, says Matzger. “They are stressed generally. There’s loss of habitat because we are building so many houses. There are more people, more dogs, more outdoor cats. There are building collisions, wind turbine collisions, these are things we have to be aware of. They affect bird populations more than many of us imagine.”

A few weeks ago Matzger returned from a trip to Joshua Tree National Park in southern California to observe the wildflower bloom. Her next birding excursion will come this spring when she heads south to Brazil. In the meantime you may spot her near Piedmont Park, watching one of her favorites, a Rufous Hummingbird, or a Titmouse, which you cannot miss with its noble, conical head.