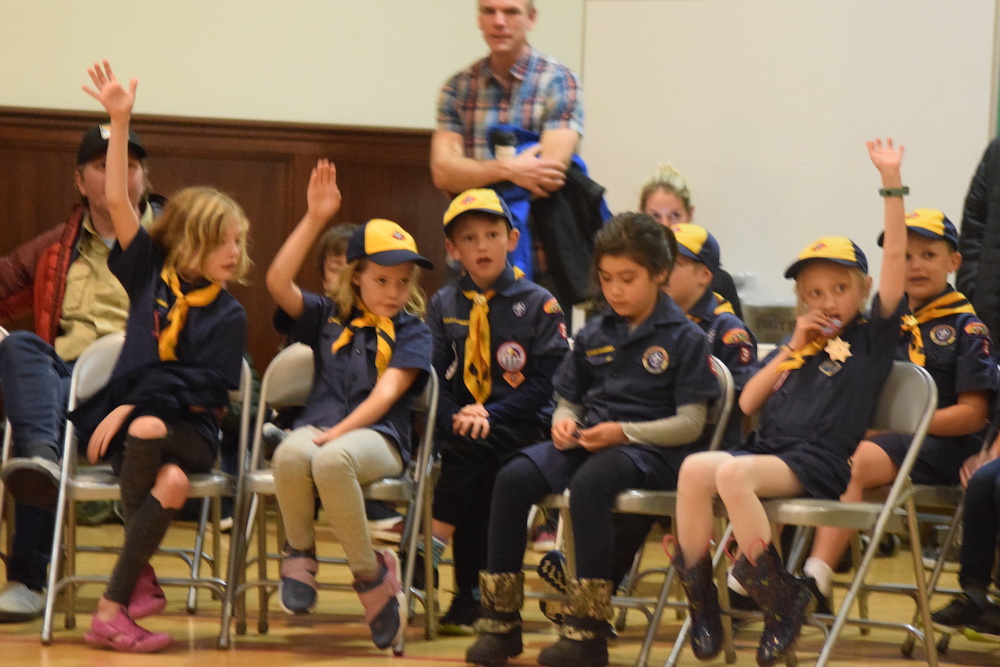 With an estimated 50 percent of the eligible young population of Piedmont taking part in Boy Scouts of America (BSA) programs at any given time, Piedmont may have the most robust Scouting participation per capita in the nation. That dedication to Scouting is reflected by Piedmont, with its 11,000 residents and 1.7 square miles, having its own BSA council. “There’s a reason for that — Piedmont does Scouting right,” said Bryan Cantrill, troopmaster of Piedmont’s Troop 1.

Piedmont, whose Scouting tradition dates from 1910, is easing into a significant change with the national rollout of “Family Scouting,” the official term for accepting girls into Cub packs and, as of Feb. 1, into Boy Scout troops whose members are 11 to 17 years old. The older-kids’ program will now be called “Scouts BSA.”

Cub Scouts has been accepting girls since June; more than 77,000 girls nationwide have since become Cub Scouts. In Piedmont, there is already one all-girl Cub den — Den 6, part of Piedmont’s Cub Scout Pack 3. And one of Piedmont’s Boy Scout units, Troop 4, is forming a “linked” girls troop, said Jo Pegrum Hazelett, scout executive/executive director of the Piedmont Council of Boy Scouts of America.

“We’re starting with one troop, and we’ll gauge demand,” Pegrum Hazelett said. If enough girls sign up, she said, the issue will re visited.

“Piedmont is probably too small for girls’ troops to be linked to every boys troop,” she said.

In these “linked” troops, the girls and boys’ units share a common charter and troop parents’ committee, and can schedule outings and activities together. But the boys’ and girls’ troops will meet separately.

This is different than with Cub Scout packs, in which boys and girls are in the same pack, but are separated in the “den” subgroups.

This relationship was on display Wednesday night, with Pack 3’s regular meeting at the Ellen Driscoll Playhouse. The six girls of Den 6 were there with perhaps 30 boys,  playing games and listening to two UC Berkeley freshman football players talk about the importance of good sportsmanship. The girls were contributing their share to the general din of the game-playing and of kids being kids.

Bernard Hale said his 8-year-old twin daughters Dani and Charli had told him they want to be Eagle Scouts. They joined shortly after becoming eligible.

“They do sports, and they do plays, but Scouting is their favorite thing,” Hale said. “Things are well-organized, and there is a lot to do. They really enjoyed making the cars and racing them for the Pinewood Derby” a few weeks ago, Hale said.

Christopher Zuber said his 9-year-old daughter Christiane is a tomboy at heart, and that she’s loved Scouting so far. Zuber himelf  is an Eagle Scout — earning it in Piedmont — and is gratified.

“My 91-year-old dad is happy about this, too,” said Zuber, noting that his father is also an Eagle Scout, and living in England. “We’re both happy, and proud.”

Karin Tulloch and Kala Hale are co-den leaders of the all-girls Den 6, part of Piedmont’s Cub Scout Pack 3. Tulloch’s second-grade daughter Molly is one of its members.

“Her older brother is a fifth-grade Webelo (Cub Scout), getting ready to move up to Scouts BSA,” Tulloch said. “My son has had a great experience and I wanted the same for my daughter. My daughter wanted to join because she saw how much fun her brother had and wanted to be in a group with her friends.”

In that same vein, Tulloch wants her daughter to learn about herself and her community while helping others and experiencing new things — the same benefits she said her son has received.  “I think the tradition and structure of Scouting is a great format for that to happen,” she said..

As first-time den leaders, Tulloch said she and Hale are learning as they go. They don’t have any adjustments to make, or any “unlearning” to do as far as welcoming girls to the ranks.

Though the process of integrating girls into the troops and packs will take some time and adjustment, no one the Exedra spoke to for this story said they foresee resistance in seeing the changes through. Pegrum Hazelett said even though she suspects some parents have reservations about having girls join the Boy Scouts, “I haven’t had one complaint come directly to me.” The Piedmont council has a history of welcoming change, sometimes before the national Boy Scouts organization. In 2000, well before the national organization lifted its ban on gay scouts, the Piedmont council sent a letter to parents saying it wouldn’t discriminate based on sexual orientation.

Girls haven’t been strangers to Scouting programs. The organization’s Venturing and Explorer programs, open to ages 14 to 20, have been co-ed since 1969. But the Cub Scouts and Boy Scouts are by far the most well-known and widespread programs BSA programs, and the change hasn’t been accepted by everyone.

The Church of Jesus Christ of Latter-day Saints, which has had a 105-year partnership with the Boy Scouts, is set to sever ties with the Scouts by the end of this year and develop its own youth programs to fill that void. In recent years, the Boy Scouts began admitting gay and transgender boys, ended its ban on openly gay adult leaders and now is welcoming girls.

Piedmont has a strong Girl Scouting tradition, as well — 642 girls are part of Piedmont-based troops as of mid-February, said Kymberly Miller, senior director of programs for Girl Scouts of Northern California, whose jurisdiction extends from Gilroy to the Oregon border and east of the Sierra. She said she sees Scouting BSA’s acceptance of girls as a “recruiting tool,” and that Girl Scouts and Boy Scouts have different missions.

“The Boy Scouts’ mission is really about boys,” Miller said.

Added Gabi Reyes-Acosta, a Girl Scouts program manager, “We know we’re the ‘girl experts,’ and we won’t be changing anything we’re doing,” she said. “We offer girls an opportunity to be who they are in many different ways, more freedom to choose their own way.” If that means Girl Scout troops pursuing outdoor activities like camping and canoeing, or instead concentrating on STEM or community service, she said, so be it.

Membership in both BSA and in Girl Scouts of the USA has declined significantly in recent years. The Boy Scouts, which peaked at about 6.5 million in 1972, had about 2.3 million members in 2016. At the end of 2017, the Girl Scouts reported 1.76 million members, down from about 2.9 million girls in 2003.

Girls haven’t been strangers to Boy Scouting programs. The organization’s Venturing and Explorer programs, open to ages 14 to 20, have been co-ed since 1969. Also, women frequently serve as Cub and Scout leaders., But the Cub Scouts and Boy Scouts are by far the most well-known and widespread programs. It’s a welcome change,  according to many involved with Piedmont Scouting.

“Despite a lot of apprehension, it’s been a very seamless transition, and I would say my perception is that the adults have more hurdles” than do the kids, said Mia Tindle, cubmaster of Pack 3.  The boys had questions before girls came, she added, but were quickly mollified.

“Once the girls joined, it was like, ‘This is always how it’s been,’ “ Tindle said. “It just wasn’t an issue after that.”